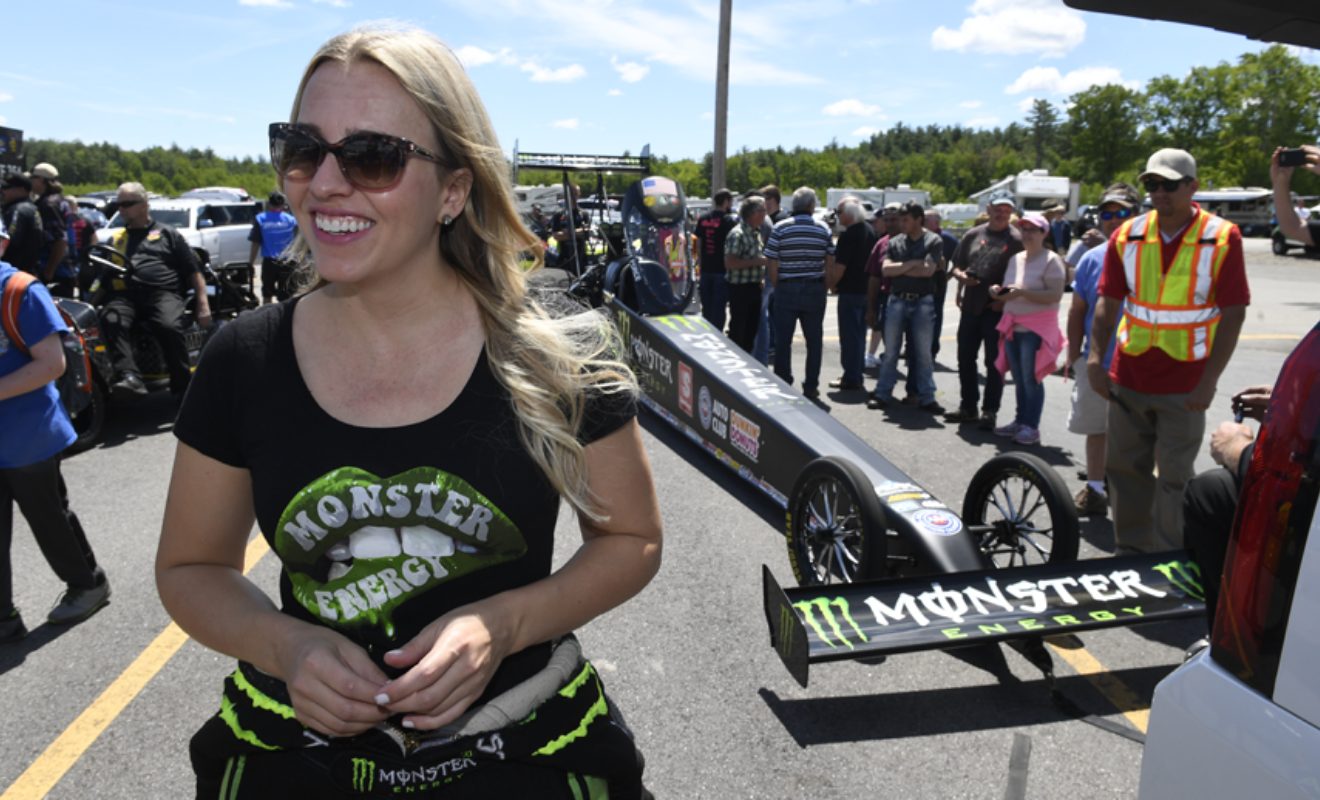 Brittany Force is a big fan of one of the most unique races in motorsports, but the Top Fuel star also recognizes the challenges that come along with four-wide drag racing and the intense focus needed to succeed in the format. Her next opportunity to get a win as part of drag racing’s ultimate thrill ride comes at this weekend’s NHRA Four-Wide Nationals at The Strip at Las Vegas Motor Speedway.
Force has enjoyed success in Las Vegas before, but never in the four-wide format, something she’s eager to change in her 11,000-horsepower Monster Energy/Flav-R-Pac dragster. Along with the incredible rush of four 11,000-horsepower nitro-burning machines powering down the Las Vegas dragstrip simultaneously, Force knows the tremendous importance of also being locked in throughout the weekend to succeed. She’s won the four-wide event in Charlotte and now will try to replicate that victory in Las Vegas, knowing full well the challenges that await.
“It’s a great experience for the fans, it’s fun to watch and be a part of, but it’s definitely a challenge keeping your focus where it needs to be. It’s tough, but we definitely want to win it again,” said Force, a former Top Fuel world champ. “One of the biggest challenges is knowing what your lane in. I’ve done it since they started this thing and you have to be focused on a lot of different things and it is a challenge. It’s tough and there’s a lot going on, but it’s definitely worth it when you win it.”
Steve Torrence (Top Fuel), Bob Tasca III (Funny Car) and Erica Enders (Pro Stock) all picked up wins at last year’s four-wide race in Las Vegas. This year’s event will be broadcast on Fox Sports 1 (FS1), including eliminations coverage starting at 7 p.m. ET on Sunday, and is also the fourth of 22 races during the 2022 season. For Force, it’s a chance to get her season going in a big way in an absolutely loaded Top Fuel class.
Through three races, there’s already been three different winners, with Mike Salinas currently leading the pack. Justin Ashley is right behind, while other marquee challengers include Torrence, the four-time defending world champ, Tony Schumacher, Antron Brown, Josh Hart, Doug Kalitta, Leah Pruett and Force’s teammate, Austin Prock. Currently fourth in points, Force is right in the thick of things and will head to The Strip at Las Vegas Motor Speedway with plenty of good vibes. She holds both ends of the track record in Vegas, including the fastest run in Top Fuel history (338.17 mph) and Force’s previous success gives her plenty of confidence heading into the weekend.
“I love racing in Las Vegas. It’s one of my favorite tracks on the circuit,” Force said. “It’s a place where we’ve had some success and we’re looking for our first win of the season, and we would love to do it there. I think this is going to be one of the toughest years in Top Fuel, but I’m excited to be a part of it and what our team can do.”