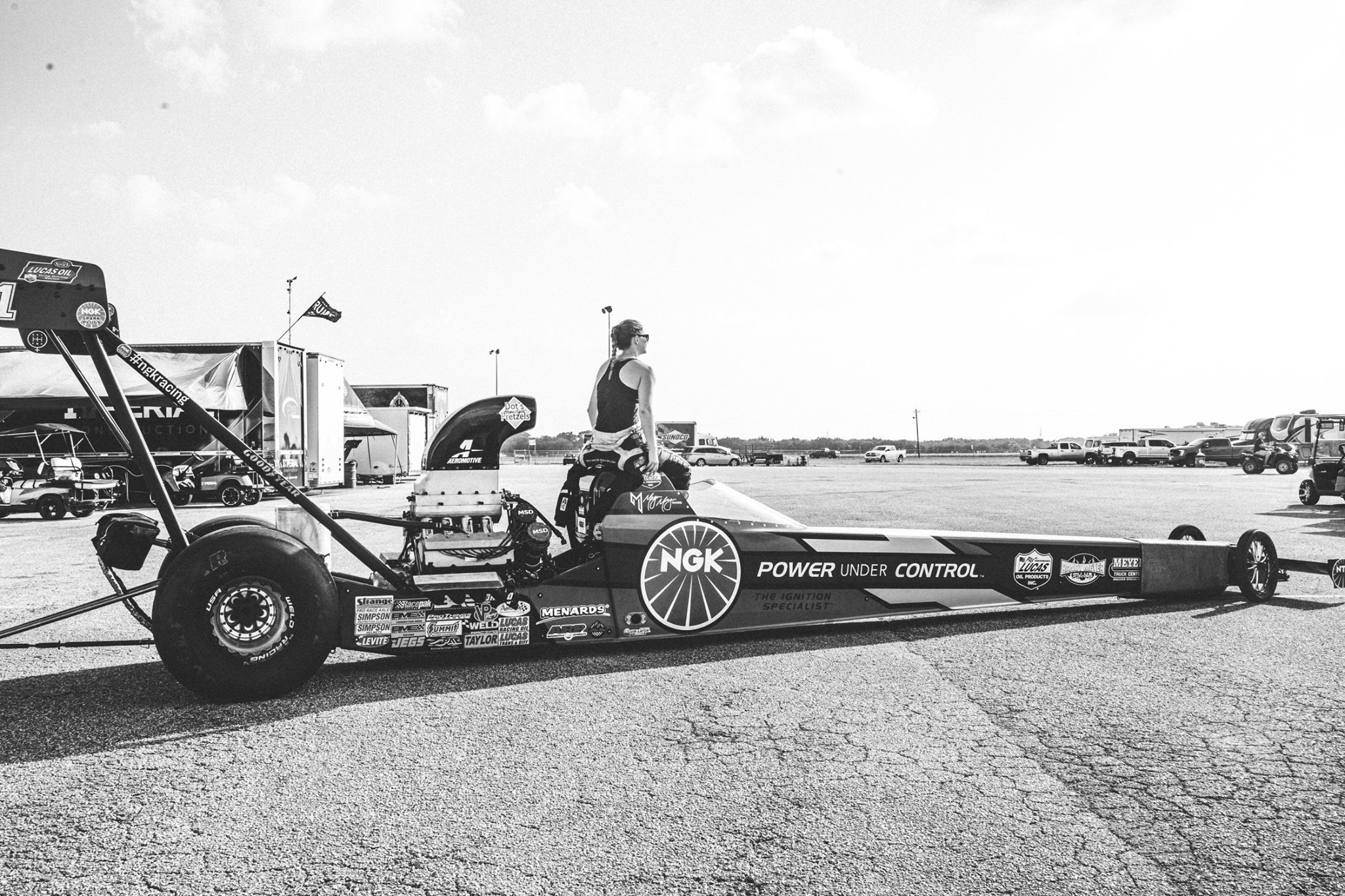 Megan Meyer, the Kansas-bred, second generation superstar who has earned nearly every title in drag racing, shocked the sport on August 31, 2020, by announcing she would retire at the end of the season to focus on marriage and a family. The twenty-six year old A/Fuel Dragster pilot should’ve added, “…right after I tie up a few loose ends”.

Four days later, the reigning NHRA Lucas Oil Series Top Alcohol Dragster World Champion unloaded her NGK Spark Plugs dragster and qualified on the pole at the 66th annual DENSO Spark Plugs NHRA U.S. Nationals in Indianapolis. Within two more days, Megan also qualified atop the Jeg’s All Stars TAD program contested the same weekend. While Megan was knocked out of All Stars competition in the opening round by her sister, Rachel, she had not yet begun to fight.

Going into Indy 2020, Megan Meyer was the third-quickest and second-fastest driver (5.11 seconds, 285.35 mph) in TAD history. When eliminations began for the biggest event of the season, Low ET at Indy 2020 was a 5.17 produced by Shawn Cowie’s brutal supercharged alcohol dragster. The echoes of Megan’s announced decision to leave the sport were still reverberating through the pits when, in the first pair of cars in the second round, Megan became forever known as the racer who finally beat the “unbreakable record”.

At the 2004 NHRA World Finals at Pomona, Oregonian Mitch Myers broke the two year-old 5.13 ET A/FD record of Gary Ormsby, Jr., with a brilliant 5.109, (backed by a 5.11). The NHRA made revisions to the A/FD rules within the TAD division and, on April 1, 2007, Michigander Bill Reichert ripped through the Baytown, TX, lights with a 5.103. The NHRA placed more restrictions on the naturally-aspirated nitro dragsters and the record sat.

It sat for years and years and years. Reichert’s “Ten” soon became recognized as an unattainable benchmark destined to remain for decades as an example that exceptional performance only earns more weight, less gear or a weaker fuel percentage. A total of eight different drivers recorded elapsed times between 5.11 and 5.15 but none succeeded in erasing the mark. The record sat, mocking all who made attempts against it, for an astonishing thirteen years, five months and four days. The record remained standing seven years after Reichert RETIRED!

Four thousand nine hundred and six days is a very long time. In comparison, 5.097 seconds is but a flicker. However, when Megan Meyer crossed the finish line in the second round at Indy against Jackie Fricke and that number illuminated on the scoreboard, time stood still. It was no less amazing the next day when, in the next round, she posted a 5.090 at 280.54 to defeat eventual low qualifier Cowie, (who earlier clocked the best blown alcohol numbers of the race at 5.16/280.54). She slowed to a 5.14/271 in the final to defeat Josh Hart’s A/Fueler en route to securing back-to-back TAD victories at the sport’s premiere event. It should be noted Megan, on the initial 5.097 pass, also smashed Reichert’s 2007 eighth-mile Top Alcohol Dragster Eliminator ET record of 3.403 with a 3.397. She already held the eighth-mile speed mark at over 238 mph.

The patriarch of the Meyer A/Fuel dynasty, Randy Meyer, deserves far more recognition than he receives. Using a five year-old Copeland chassis and an uncomplicated Brad Anderson Chrysler Hemi, Randy fought to create this record-setting tune-up despite every obstacle the NHRA Technical Department could throw at him. Randy’s own storied career includes everything from AHRA World Championship-winning Blown Alcohol Dragsters to a mighty self-funded Top Fuel effort through the late 1980s and early 1990s before he also left the sport to build a family…and a bigger racing team.

The Meyers’ Indy romp marked the second time in 2020 an outright performance mark in the alcohol classes has been exceeded. At the NHRA Div. II LODRS event in March at Gainesville, FL, Coloradoan Annie Whiteley pushed her J&A Services Camaro to the fastest Top Alcohol Funny Car speed ever at 276.18 mph.

There have been some notoriously long-standing records in drag racing’s annals but the entire Meyer family will hereafter take the credit for finally surpassing the one which stood for almost a decade and a half. Only the sport’s thrust-powered standards have stood longer.