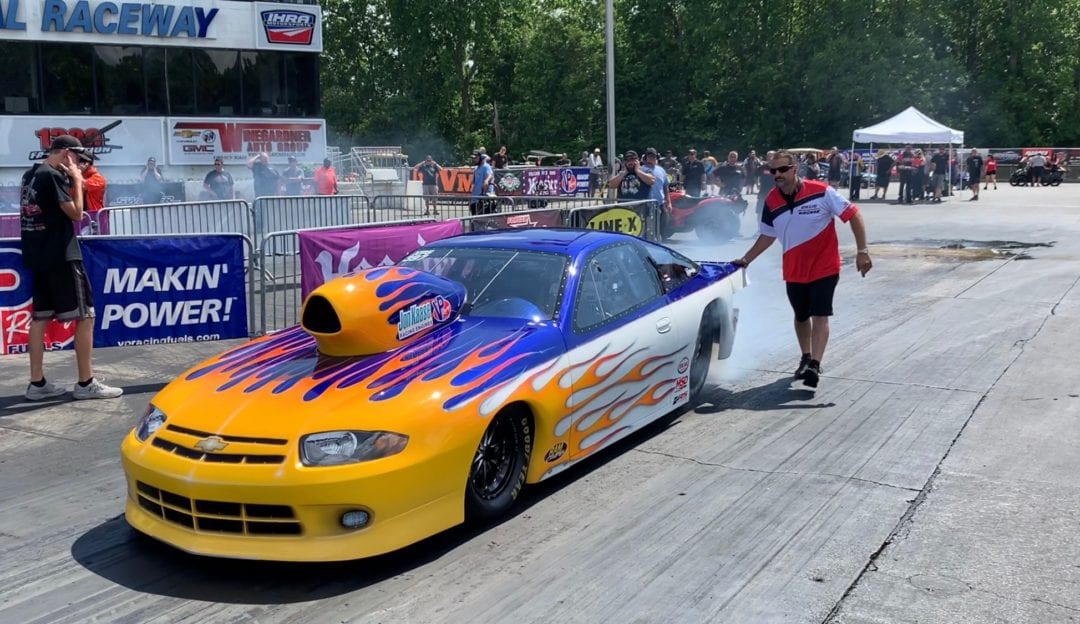 Before Thursday morning, Tony Gillig’s last time sitting in a Mountain Motor Pro Stock car was when he steered Larry O’Brien’s Bear’s Performance Dodge Avenger to victory at the 2011 ADRL World Finals in Ennis, Texas. At this weekend’s PDRA North-South Shootout presented by Line-X at Maryland International Raceway, the Chicago-area native is making his return to Extreme Pro Stock in a 2004 Chevy Cavalier owned and campaigned by Eddie and WR Buck.

Gillig, who returned to racing in PDRA Pro Outlaw 632 a year ago, made one test pass in the Kaase-powered entry during PDRA’s Thursday testing. Running on a track well over 120 degrees, Gillig clicked off a 4.22-second pass at 172 mph, drawing positive reactions from both the driver and car owner. 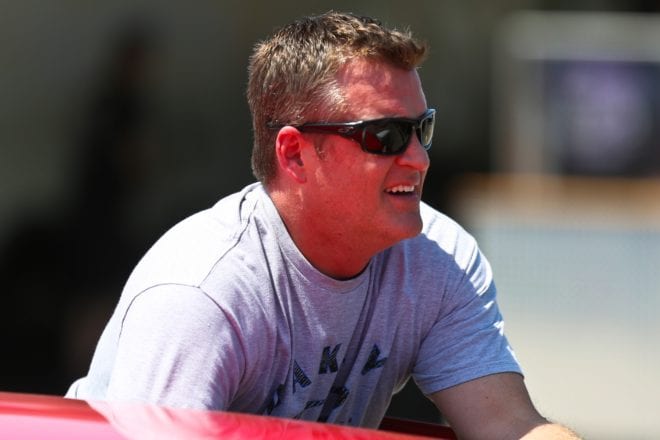 “Tony is a professional driver,” said Buck, the father of Drag Illustrated Founder and Editorial Director Wes Buck. “He jumped in the car, made himself at home and him and Billy (Wagner) did a great job helping us get it down the track. A 4.22 at 172 – hotter than hell – I’m really tickled with it.”

Buck purchased the car turn-key from Richard Freeman and Elite Motorsports in 2012. It was built by RJ Race Cars in 2004, though the car hadn’t been down the track before Thursday’s test lap. Since purchasing the car, Buck took it to RJ Race Cars for chassis updates, had the motor freshened by Jon Kaase Racing Engines, upgraded the Ram clutch and installed state-of-the-art shocks from Precision Racing Suspension.

“It was a turn-key deal and I thought, ‘Boy, this won’t be that big of a deal to get it going,’ – I should’ve known better,” Buck said. “The next thing you know we spent a whole bunch of money and you still have to get it all together, you have to get your truck and trailer together and we had to drive the 1,050 miles to get here. All in all, it was worth it. I was about in tears when the car went down the track.”

Extreme Pro Stock and Pro Outlaw 632 cars run within the same test session windows during Thursday testing, so Gillig and his crew, led by brother-in-law Billy Wagner, had to rush back and forth between running the family Outlaw 632 car and the Buck Bros. Pro Stocker. Gillig was preparing to strap into the Pro Stock car for one final test run when it started to rain, ending the test day and taking away the last chance to get data before going into Friday’s three qualifying sessions.

“The first run we made went down the racetrack, so we have some room to work with,” Gillig said. “We’ll start chipping away at it and making it run faster. Hopefully we get decent weather and we can make three good runs with it and see where it puts us.”

Buck, who previously raced NHRA Pro Stock and campaigns a Nostalgia Pro Stock car with brother WR, plans to run the Cavalier with Gillig driving in the Mountain Motor Pro Stock exhibition at the NHRA Thunder Valley Nationals in Bristol, Tennessee, in June.

“We’re gonna go to Bristol if everything turns out good this weekend, then we’ll have to go from there and see what time allows us and what Tony can do,” Buck said. “I race for my own personal pleasure. The bottom line is, there ain’t nothing more fun than going drag racing. I frickin’ love it. I love drag racing. Always have, always will.”

Meanwhile, Gillig is just excited about the opportunity to race in Extreme Pro Stock again, all in addition to driving the Gillig-Wagner Motorsports Olds Cutlass in Pro Outlaw 632.

“Thanks to Eddie and WR for the opportunity to drive their car,” Gillig said. “Thanks to my brother-in-law, Billy Wagner, and my father and my sister Chrissy for jumping on board with us and wanting to do this too, because it’s all a lot of work for all of us. Trying to test the two cars in that short window was tough. During qualifying, I’ll be at the front of the pack with the Pro Stock car and closer to the back with the 632 car, so I’ll have more time to transition.”