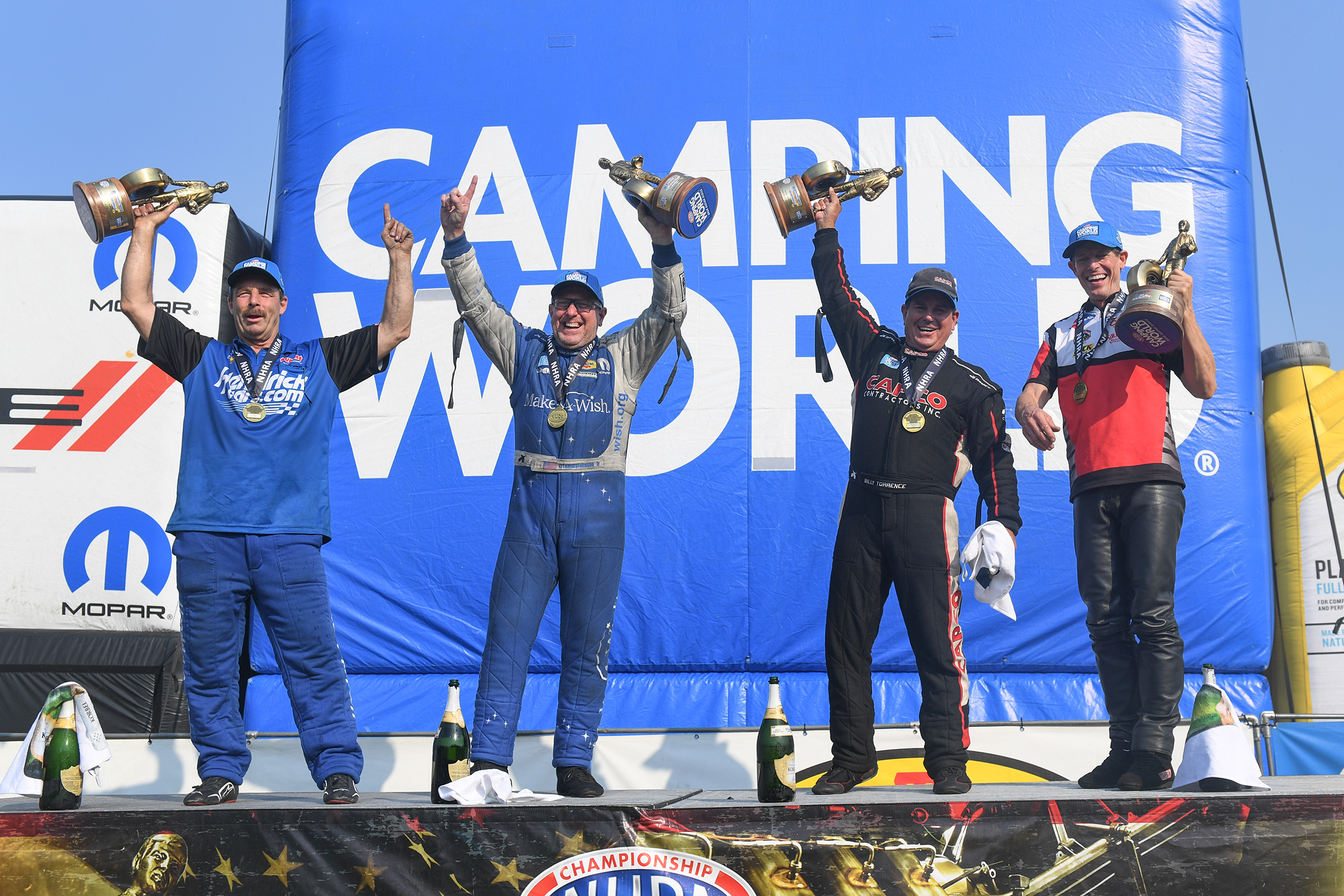 With Hagan recovering from COVID-19, Johnson stepped in for his Don Schumacher Racing teammate at last week’s U.S. Nationals and this weekend’s playoff stop at Maple Grove Raceway, and he took full advantage of the opportunity. He went 3.926-seconds at 330.23 mph in the 11,000-horsepower Mopar Dodge Charger SRT Hellcat, taking out John Force’s 3.946 in a thrilling side-by-side duel in the final round. Racing at the site of his first career Funny Car win, which came in 1999, Johnson took down Jim Campbell, Ron Capps and J.R. Todd to reach the final round. All the points Johnson gained this weekend went to Hagan per the NHRA’s replacement policy for medical reasons, but the veteran was thrilled to race. 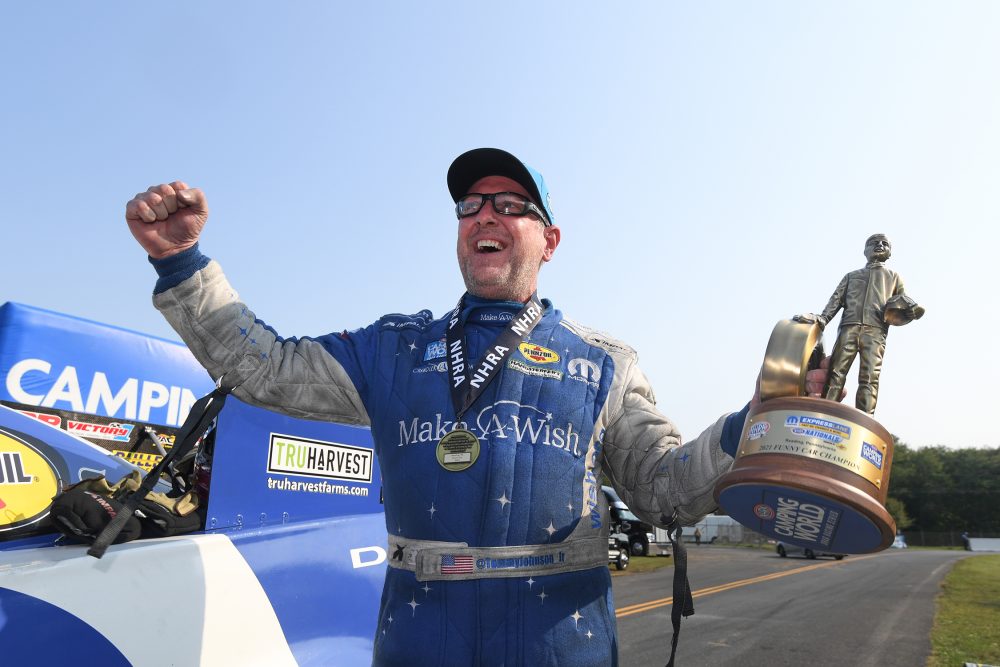 “It was pretty cool. I was astonished. We’ve come a long way in a week,” said Johnson, who now has 23 career wins. “It meant a lot and I kept thinking of my dad (who passed away earlier this year) all day. The sport of drag racing is my whole life and to come out and win for these guys, it’s just amazing. I’m still astonished it happened. It was about as smooth of a transition to make this happen. To come out here and get a win, this race will mean a ton to me.

“I know it was close against John. He’s pretty good still and to race him in the final and get this opportunity after not racing all season, that makes it even more special. He’s the best the class has ever had and to top him means a lot.”

Force knocked off Indy winner Tim Wilkerson, Paul Lee and teammate Robert Hight to reach the final round for the fifth time this season and 261st time in his career. He also jumped into the points and leads Hagan by five points. Ron Capps is third, 15 points behind Force.

In Top Fuel, Torrence delivered one consistent performance after another, turning in a 3.720 at 326.08 in his 11,000-horsepower Capco Contractors dragster in the final round to knock off Justin Ashley. Torrence made a huge jump in points, moving from eighth to third on the strength of his second win this season and eighth in his career. He beat Josh Hart, Shawn Langdon and No. 1 qualifier Brittany Force to reach the final round, running 3.71 or 3.72 on all four passes in eliminations, including his run against Ashley in the championship round. 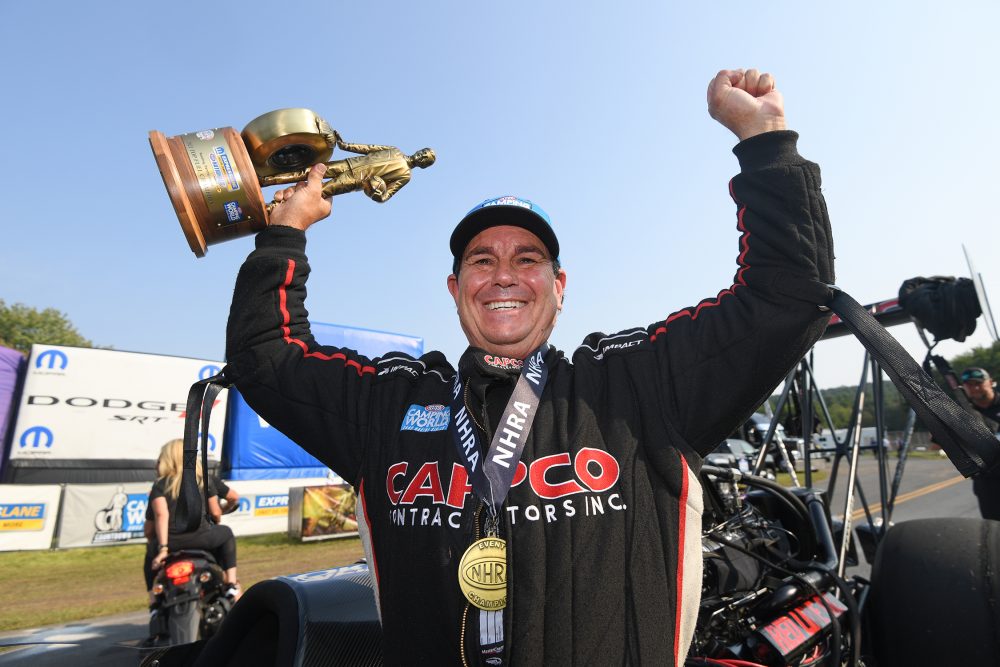 “That’s a really good team that ran really well and I had a good car,” Torrence said. “I’m certainly the weak link in my car, but they made me look good in the end. It says a lot for the boys. It’s a shame they don’t have a better driver, but the car is really good. I have a good time and at my extended age, I’m going to take all the wins I can get.”

Ashley reached his second final round in 2021 by knocking off Doug Kalitta, Clay Millican and points leader and three-time defending world champ Steve Torrence. But S. Torrence left with the points lead, though it’s now shrunk to just 12 over Force. B. Torrence trails his son by 42 points and Ashley moved up to fourth.

It was a huge day for Anderson in Pro Stock, as the veteran tied NHRA legend Warren Johnson for the most wins in class history, picking up his 97th career win with a victory over defending world champ Erica Enders in the final round. Anderson went 6.578 at 208.30 in the finals to beat Enders and earn his third victory of the season. Tying W. Johnson was something Anderson has been trying to do since early May and he took care of business to open the playoffs, beating John Gaydosh, Matt Hartford and Troy Coughlin Jr. to reach the finals. There, he left first on Enders before soaking in the memorable moment. 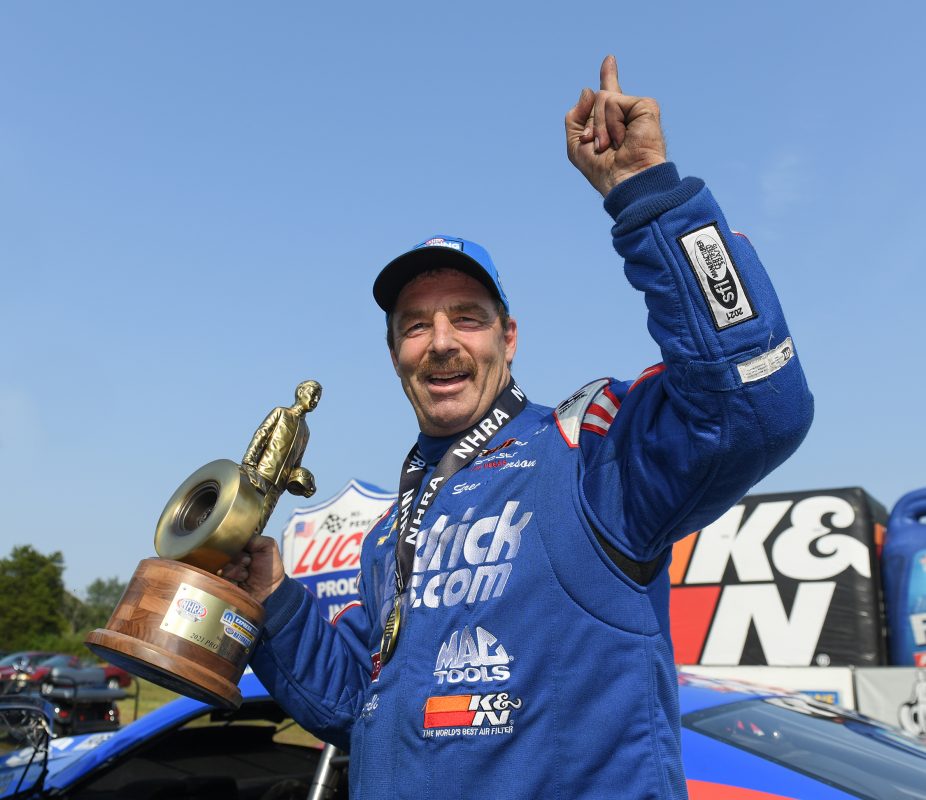 “I was absolutely shocked that the win light came on. There’s been so many races in a row where it simply wouldn’t come on,” Anderson said. “You think you have everything going well and the light just doesn’t come on in the final round. What a great, great feeling. There’s nothing better than when that win light comes on. It was a huge day to finally tie Warren. I learned so much from him and it’s kind of a cool story. Now I get a chance to try and beat him, and we’re going to Charlotte with a chance to break that record.”

Enders, who won last weekend in Indy, beat Larry Morgan, Chris McGaha and Dallas Glenn to reach the final round for the fourth time in 2021 and 59th time in her career. Anderson extended his points lead to 42 points over Enders, while Aaron Stanfield is third.

In Pro Stock Motorcycle, S. Johnson finds himself in the points lead for the first time in seven years after beating Eddie Krawiec in the final round on his Mac Rak/Slick 50 Suzuki with a run of 6.775 at 196.87. It was the quickest run of eliminations in the class and Johnson earned his second win this season and eighth in his career. It’s also the first time Johnson has won two races in a season since 2008. To get there, he knocked off Jim Underdahl, Scotty Pollacheck and No. 1 qualifier Angelle Sampey, quickly turning things around this weekend after a slow start. 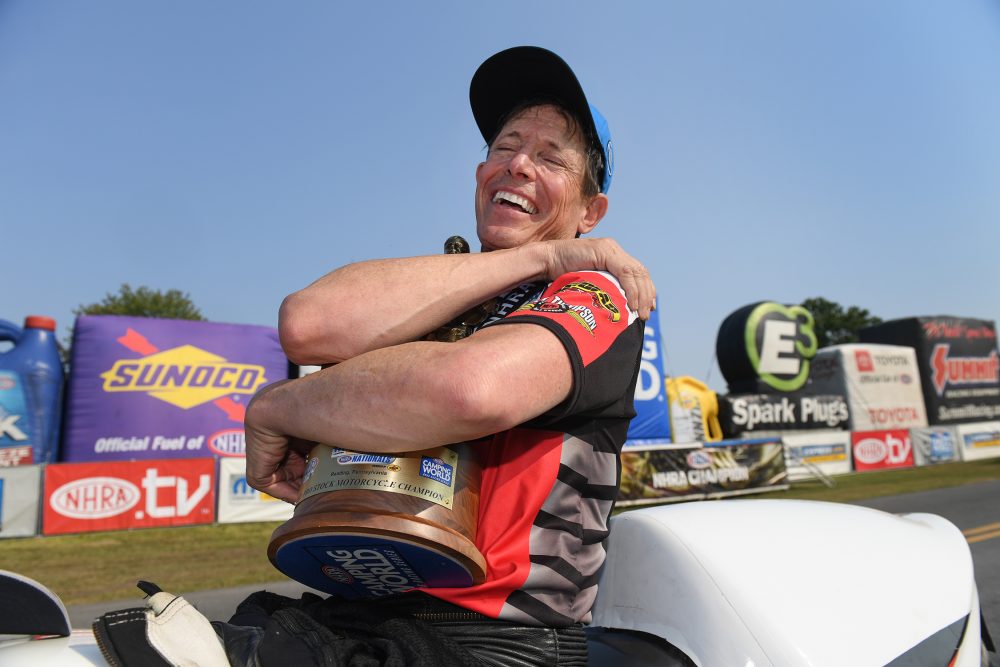 “Clearly you want to be leading the points and it’s great, but what it really boils down to is the process,” Johnson said. “Leading the points is just a dream. The driver that was here on Friday and Saturday, he was atrocious. I just got sideways and everybody said go back to fundamentals. I was out here for a long time before racing started just working on the fundamentals. You can always learn. I was really, really bad on Friday and Saturday, and everyone was going fast. That’s a classic example or riding a bike or driving it, and the driver was here on Sunday.”

Krawiec reached his second straight final round and 78th in his career by defeating Kelly Clontz, Angie Smith and defending world champ Matt Smith, who now trails Johnson by 12 points. Krawiec is 36 points back of Johnson.

***
Sunday’s final results from the 36th annual Mopar Express Lane NHRA Nationals presented by Pennzoil at Maple Grove Raceway. The race is the 14th of 20 in the NHRA Camping World Drag Racing Series: