“I’ve had five other national event wins in my career, and that was close to a topper,” said Gray, who won his first Pro Mod national event in 1994. “After all the adversity I’ve been through in the last year and a half, between getting injured and my crash last year and struggling, it was definitely a morale booster for me and my two guys. It’s just us three: Wayne Waldmann, Lonnie Pass and myself. I’ve been at it a long time, but gosh, we needed that.”

Gray recorded low elapsed time of the event, a 3.663 at 204.36, in his semifinal win over Ken Quartuccio, who ran a 3.685 in his ProCharger-boosted “Serial Killer” ’69 Camaro. The pass also gave Gray lane choice by just three thousandths of a second going into the final round against Salemi.

“I felt very confident the whole race,” Gray said. “That was my third race back. The first one I was pretty nervous. Todd Tutterow helped coach me through it. He told me, ‘You need to start driving like you used to and quit worrying about tuning.’ It took me about two races. We’re not a big-budget team, but we take this stuff very seriously. I bought my first practice tree and I’ve been home practicing on the full-size tree, trying to get my routine down to where I don’t have to think, I just react. It’s definitely starting to pay off.”

“Melanie’s definitely a very good driver and Jon’s a very good tuner,” Gray said. “I knew it was going to be a race. I just tried to keep my head clear. As Todd taught us, run the racetrack one race at a time. That’s what we did the whole weekend. Fortunately, we had the best outcome on that run.” 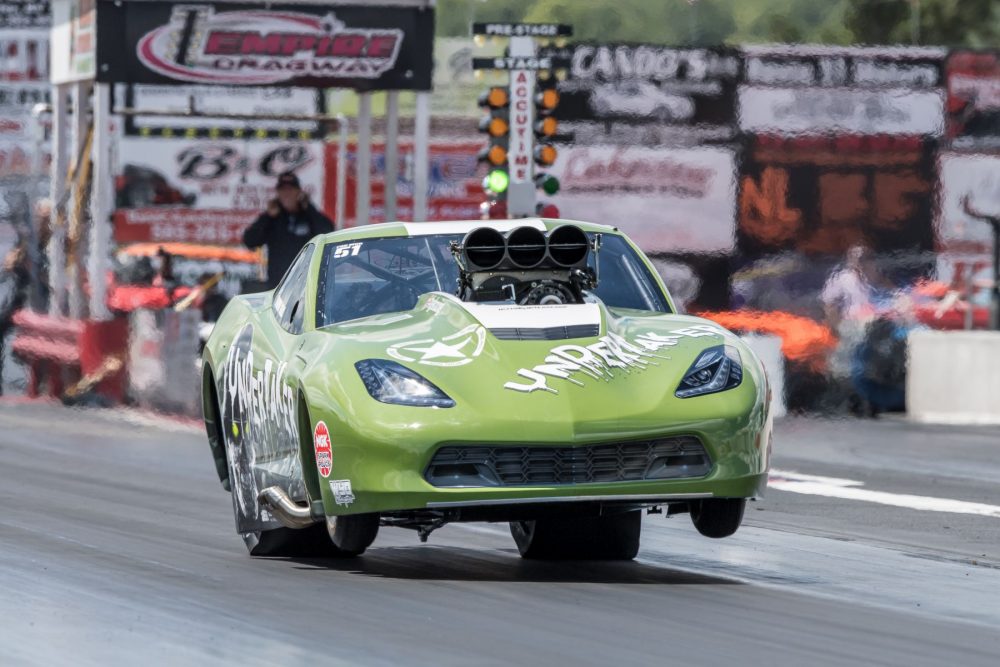 The win was Gray’s first win in his new Jerry Bickel-built ’18 Corvette, which features a screw-blown engine assembled by Tutterow’s Wyo Motorsports, as well as a Ty-Drive converter drive unit.

“I said I wouldn’t do this anymore if I couldn’t put the best pieces around me,” Gray said. “I have my Jerry Bickel car and I brought in Todd and Ty Tutterow to do their magic and make this car fast and consistent. He’s a friend of mine and we’ve raced for many years. It’s his engine combination, and the Ty-Drive is really working well and helping with my lights. I also get a lot of help from Carter Site Services, NGK Spark Plugs, and Connelly Funeral Homes.”

The Northeast Outlaw Pro Mod Challenge also included a consolation race for drivers who didn’t qualify for the 16-car field or who were eliminated in the first round. The consolation race win went to Matt Hutter. 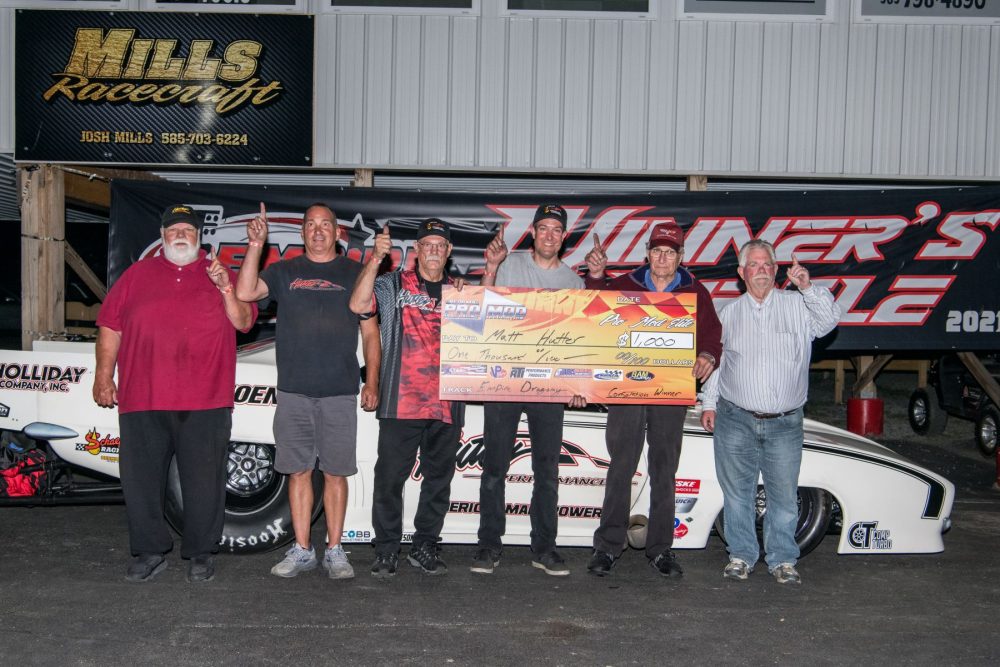 The event was the Northeast Outlaw Pro Mod Association’s first appearance at Empire Dragway. The former IHRA national event track has undergone major renovations under the direction of track owner Jerry Scaccia. The NEOPMA teams raved about the facility, and the local fans packed the stands, making for a win-win situation.

“I hadn’t been to Empire in probably 25 years since IHRA went there,” Gray said. “What [Scaccia] did with that racetrack was pretty astonishing. I haven’t seen that many fans in many years. They sure were nice. They made my heart grow stronger. After what I’ve been through with operations and all that stuff, coming up that return road every time made it feel worth it with the cheering and the little kids excited about the racing. Just a great bunch of people up there.”