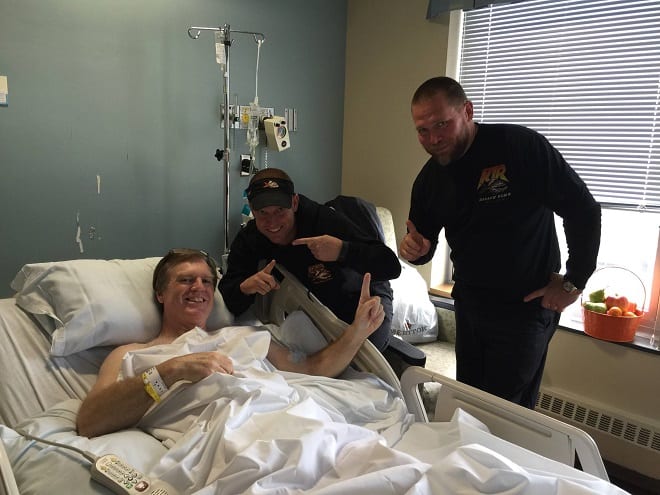 On April 9, 2016 Drag Illustrated Senior Editor, Ian Tocher, was photographing the PDRA Spring Nationals from the top end of Rockingham Dragway. He was located past the quarter-mile, well beyond the eighth-mile finish line, shooting the Top Sportsman category as he’d done hundreds of times before. Reigning PDRA Top Sportsman World Champion Ronnie Davis came up for his final qualifying pass. Davis was uncharacteristically on the outside-looking-in of the 16 car field. This would be his last chance to make it in. As good friends, Tocher was pulling for Davis to make a pass that would qualify him to compete on race day.

Incredibly, Tocher remained conscious and alert through the impact and immediate medical treatment. Davis was unconscious on the scene and later succumbed to injuries from the accident. Tocher was immediately airlifted to UNC Hospital in Chapel Hill, N.C. While Tocher was fortunate that he was struck at his waist and below, he sustained severe injuries that required multiple surgeries to reconstruct his pelvis and graft muscle and skin to his lower left leg.

Tocher is expected to move from the hospital in Chapel Hill next week and will spend 4-6 weeks in an acute rehab facility in Atlanta where he will undergo additional surgeries and physical therapy. Doctors are hopeful he’ll make a full recovery. Within a few days of the accident a GoFundMe page was set up for Ian and has already received over $60,000 to help with his growing medical bills.

Tocher has received visits from champion racers, fellow colleagues and various friends in the racing community and beyond. “I’ve been overwhelmed by the outpouring of support from not only the racing community, but also my friends in Atlanta. It’s been a humbling experience to just see how kind everybody is,” Tocher said in thanks to those who have supported his journey.

“The events at Rockingham Dragway cast a shadow over everyone in the PDRA,” stated PDRA Director, Bob Harris. “We are thankful to see Ian’s progress and continue to wish him well. It’s amazing to see how the racing community has pulled together to support him through his recovery. We hope to see him back at the track real soon.”

The PDRA and its staff are hosting a gathering to honor Tocher and the memory of Davis at their next event, the Texas Nationals at the Texas Motorplex. On Thursday, May 19, after the day’s testing, racers are invited to gather at the pavilion behind the tower from 8-10pm. Pizza will be provided.

Donations can continue to be made through the GoFundMe page or through God Speed Ministry’s Bridge the Gap Fund. God Speed Ministry also has a fund to help the Davis family cover his medical and burial expenses.