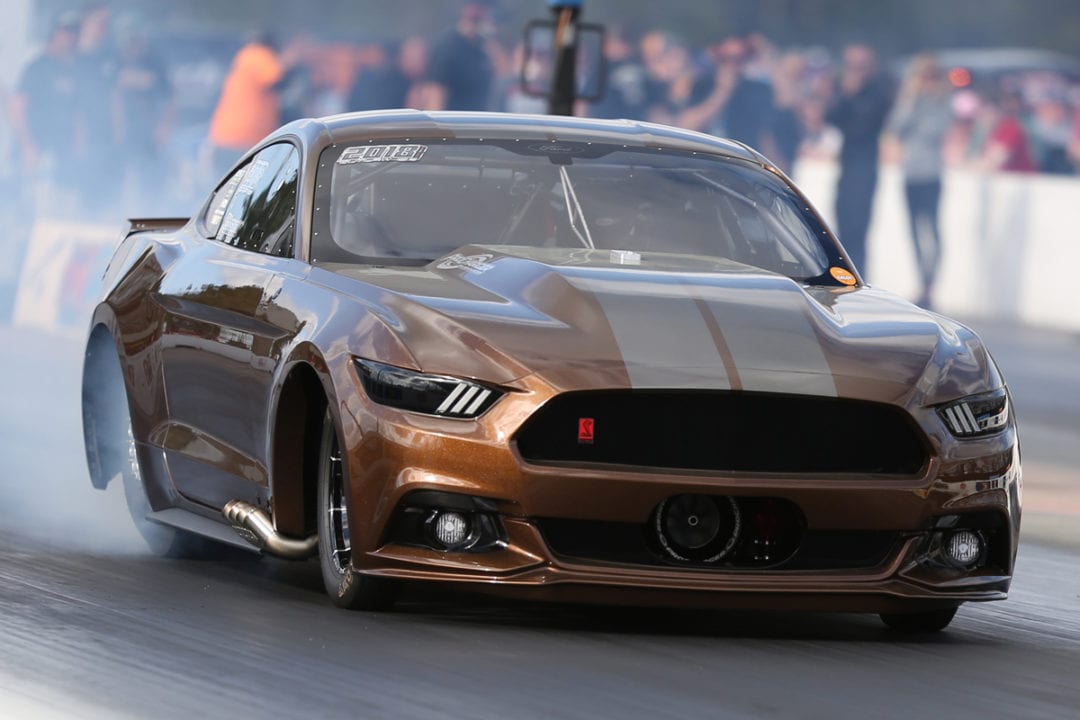 With its sleek body lines and sparkling brown paint job, Tim Essick’s “Brown Sugar” 2018 Ford Mustang immediately started turning heads when it made its debut at the 2018 PDRA Firecracker Nationals at Virginia Motorsports Park in late June. Few people even knew it existed before shots of the car were posted online just one month earlier, as the project was kept a secret for nearly two years as it developed in Essick’s three-car garage in Port Tobacco, Maryland. Aside from the chassis powder coating, the entire build was conducted in-house by Essick and a few friends.

Essick built the Alan Johnson Performance Engineering 481x powerplant with a ProCharger F-3R-136 centrifugal supercharger to fit a specific rule package within the Atomizer Racing Injectors Outlaw 10.5 National Championship Series, which competes at PDRA races three times in 2019 with presenting sponsorship from Drag 965. It’s a familiar combo for Essick, who ran a similar package in the early 2000s before switching to twin turbos. 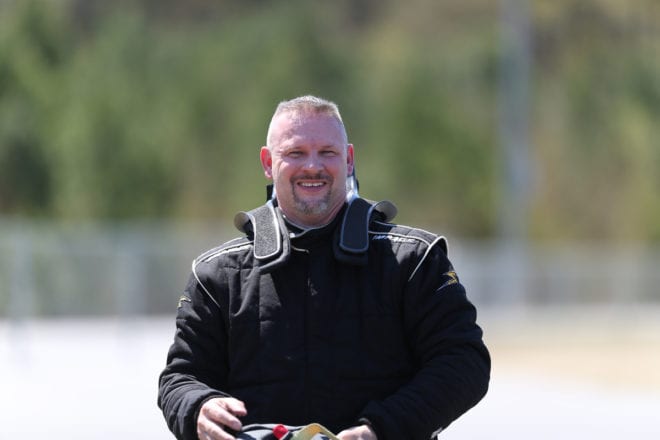 Essick admits he went through some typical “new-car blues” with Brown Sugar, but it’s been a serious contender since the Outlaw 10.5 veteran worked out the kinks. He recorded the first 3.8-second pass on true 10.5-inch slick tires, a 3.896 at 195.73, on his way to a runner-up finish at the PDRA World Finals in October, then lowered the mark with a 3.86 at the World Cup Finals at Maryland, subsequently winning the Outlaw vs. Extreme class. Essick plans on further improving the record this season.

“When I started this car, I would’ve never expected it to work so good, so fast,” Essick says. “It’s just been a blessing being able to take my time and build it the way we wanted to do it. I look forward to winning a lot of races this year.”

After racing to a runner-up finish at the season-opening PDRA East Coast Nationals presented by FuelTech at GALOT Motorsports Park, Essick sat down with DRAG ILLUSTRATED to talk about Brown Sugar, the rewards of building the car himself and his decision to stick with the 10.5 tire.

Your car has a unique story. Where did it start?

We decided in 2016 to start building a new car. Actually, when Ford changed the Mustang design in 2015, I petitioned to Ford to try to get a body. At the time, they weren’t going to release any. In 2016, they decided they were going to release one to me, so we went to Michigan and picked up a car, then started this build. We built it in secret based around the rule package that’s in the car currently because it looked very favorable to me and I didn’t want anybody else running the same idea.

It was kind of funny – in the background at the time while we were building the car, we started seeing Steve Morris and Proline starting to advertise that supercharged 481x combo. We kind of giggled, “hey, do they have a camera in our garage?” I guess they had the same idea.

All in all, we finished the car the middle portion of last year. Since we brought it out, after about 12 or 15 test passes, the thing just started working flawlessly. 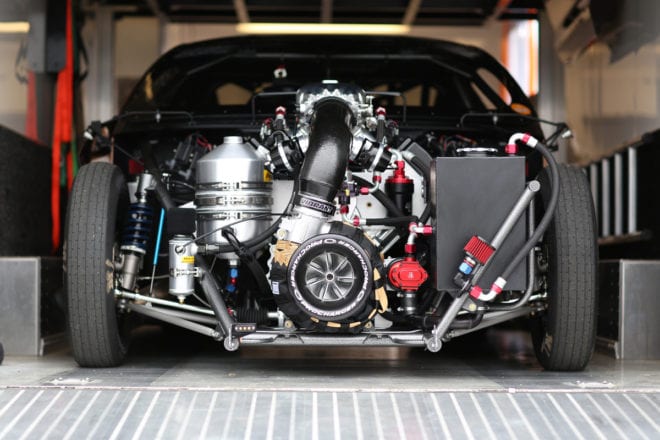 How hard was it to keep that under wraps?

It was a little difficult. I have a close-knit group of friends that kept it quiet, but sometimes when there was a race at MIR (Maryland International Raceway), which is local to me, some guys would need a little something done – fix a broken trans or whatever. We kind of had to trust that a couple strangers who came in wouldn’t say anything, and it seemed like it worked.

You put the car together in your own garage, from chassis fabrication, engine building and wiring to the paint and bodywork. What did that process look like?

I started by building a frame jig. I didn’t have one in the past, so I went ahead and built a jig, started building the car and just worked bit by bit on it by putting everything into it that I had learned over the years that I wanted and thought would work best. Through 2016, we’d work on the new car during the week and run the old car on the weekends.

In an era when most people go to a chassis builder, paint shop and engine builder to do most of the work on a new car, how rewarding was it to put your own car together like that and have it be as successful as it’s been?

It definitely is rewarding. Most of the joy that I get out of it is actually building or making the stuff. But to be able to put something together yourself and have it perform as good or better than all of the big-name, big-paid companies and people, it’s definitely a humbling experience.

The paint on the car is a one-off color. What made you go with that look?

Well, I’ve always been the guy to do something a little bit different. I always loved blue, but my last car was blue. I kind of thought about doing candy red, but in the midst of the build, there were a couple cars that came out in a candy red fashion. I was just looking at various color samples and saw something that I thought, “nobody is going to go with a brown and nobody has done it, really.” So I just started tinkering with a couple different formulas and ended up coming up with the color that we call “Brown Sugar.” That’s subsequently what we named the car. 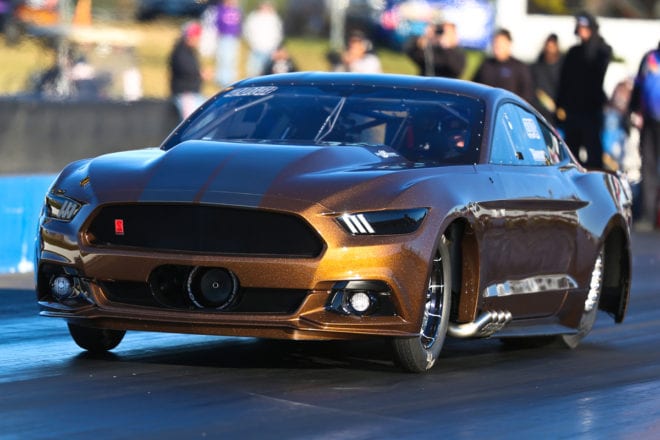 The car has won Best Appearing and Best Engineered awards on multiple occasions. Do those awards rank right up there with wins and records?

Yeah, those awards mean more than any other trophy hanging on my shelf. Just to be picked out of hundreds of cars at an event, and two times back to back at that, it’s very special.

With quite a few Outlaw 10.5 guys switching over to radials recently, is it a point of pride for you to remain on the 10.5 tire?

It is. I truly believe that I can run .70s with this tire and I plan on doing it before I switch over to radials. Even if I do (run .70s), I may not switch to radials. I’ve ran this tire forever and I feel it’s a safer, more forgiving tire, but the radial with the right track prep is definitely faster. There’s no denying that, but I have intentions of sticking with this tire as long as I can.

What’s on your schedule for this season?

We plan on running all of the PDRA races that have 10.5 (the North-South Shootout presented by Line-X at Maryland International Raceway May 31-June 1 and the World Finals at Virginia Motorsports Park Oct. 18-20). We’ll run the Cecil County Shootout 10.5 races. I think we’ll run the Shakedown race at VMP. We’re contemplating running this No-Prep race, trying to knock off a few of these Street Outlaws guys down here at MIR in a couple weeks. We may jump in on some of that fun. We’ll run the Yellowbullet Nationals, of course, and we want to try to get to some of Lance Stanford’s Carolina No-Time stuff if we can.

You have a packed schedule, but one of the constants is the PDRA series. What is it about PDRA races that you enjoy?

When you get there, you feel like family. You feel special, welcomed – every PDRA employee is so nice and polite and eager to help. They’re not arrogant, they’re not pushy, they just want to help you have a great weekend, and that means a lot. Going to the racetrack, all the time and money you spend traveling, it’s a hobby to all of us racers. We do it for the fun of it. If you go to a racetrack where you feel special, it makes you want to go back.