Drag racers from all across the United States are heading to Osage Casino Tulsa Raceway Park this weekend (Oct. 13-14), for the Mid-West Pro Mod Series (MWPMS) World Finals, held in conjunction with the Throwdown in T-Town, which promises to rank among the biggest drag races held nationwide this year. And incredibly, fans will be admitted free just by downloading tickets from a link on the track’s Web site at www.tulsaracewaypark.com.

MWPMS world champions in four classes will be crowned at Tulsa in the last of five races for the organization’s inaugural season, headlined by the wild and unpredictable Pro Mod class, where drivers wheel their fire-breathing machines to 3.7-second passes at more than 210 mph over the eighth mile. Also racing for championships will be teams in Radial vs. the World, X275 and MX235, all using various sizes of drag radial tires as opposed to the huge, rear slicks on the Pro Mods.

Four drivers, led by two-time race winner Eddie Rogers in his supercharged ’68 Chevelle, remain in contention for the 2017 MWPMS Pro Mod world title. Following Rogers just 11 points back is Jonas Aleshire in a supercharged 2016 Corvette, with MWPMS promoter and Tulsa track co-owner Keith Haney another 20 points back in third with his nitrous oxide-boosted ’16 Camaro, and Jon Stouffer and his blown ’71 Cuda the championship long shot at only 86 points behind the leader. 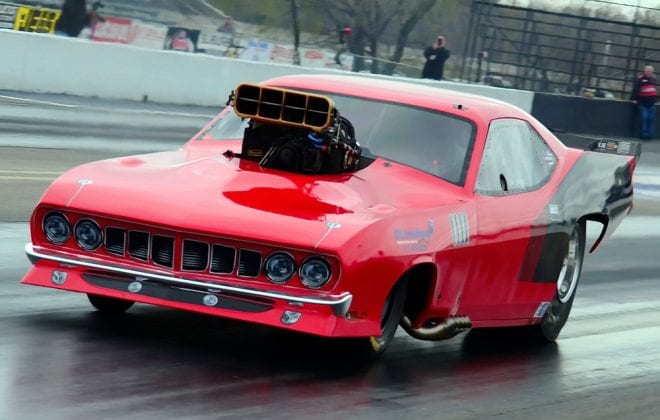 But none of these men will have an easy path to the championship. With 28 confirmed pre-entries for the Throwdown, the event will feature the largest Mid-West Pro Mod Series field in history. And with $10,000 going to the race winner everyone will be going all-out after the top prize.

Ready to knock off any one of the contenders who may falter will be the likes of TRP co-owner Todd Martin, Mike Coldiron, Brian Barnett, Brandon Lewis, Ron Muenks, PDRA veteran Jim Sackuvich, and Tony “Sandman” Williams of NMCA fame, among many other national doorslammer heavy hitters.

“Anyone who thinks they’re going to have an easy path to the championship is kidding themselves,” Haney stated. “There’s going to be a major spoiler alert for every round of qualifying and racing; every run is going to count toward getting that championship. It’s going to be a real slugfest, I can promise you that.”

Haney’s second car, driven earlier this year at MWPMS events by Brandon Pesz, currently leads in Radial vs. the World points, but it’ll be the boss himself pulling double duty behind the wheel at his home track. It remains a tight race for the championship there, too, however, with DeWayne Mills fresh off a huge win in Georgia just last weekend close behind in a tie for second with Mark Micke, and Mark Woodruff and Tim Slavens rounding out the title hopefuls.

Yet another dogfight for the 2017 championship looms for X275 competitors, as Kenny Hubbard maintains a slim lead over Bob Bales, Phil Hines, Team Mills and Randy Matlock at the top of the points list. And finally, in MX235, points leaders Phil Reichardt and Brian Edwards will be not only racing for the 2017 MWPMS title, but for $20,000 paid to the event winner, representing the largest payday in the history of the class.

The Throwdown at T-Town also will feature a 4.70 index class open to all comers—dragsters, door cars, altereds—anything able to dial in at 4.70 and make it down Tulsa eighth mile. There also will be a 6.0 index class, nostalgia gassers and Jr. Dragsters, with all the Throwdown action transmitted live online via Bangshift.com. Additionally, as part of a special tribute and fundraiser, Bangshift’s Chad Reynolds will be racing the station wagon previously campaigned by his wife, Daphne, who recently passed away.

“This will be the biggest race in Mid-West Pro Mod Series history and the biggest race at our track this year,” Haney declared. “It’ll be bigger than just about any sanctioning body race anywhere in the country, something you really don’t want to miss.”

Spectator gates for the Throwdown at T-Town open at 5 p.m. this Friday night (Oct. 13) at Osage Casino Tulsa Raceway Park, with Mid-West Pro Mod Series qualifying rounds scheduled for 7 p.m. and 10 p.m. The on-track action will resume Saturday at 10 a.m., with two more MWPMS qualifying sessions beginning at noon and 2 p.m., followed by elimination rounds starting at 5 p.m. for all classes.