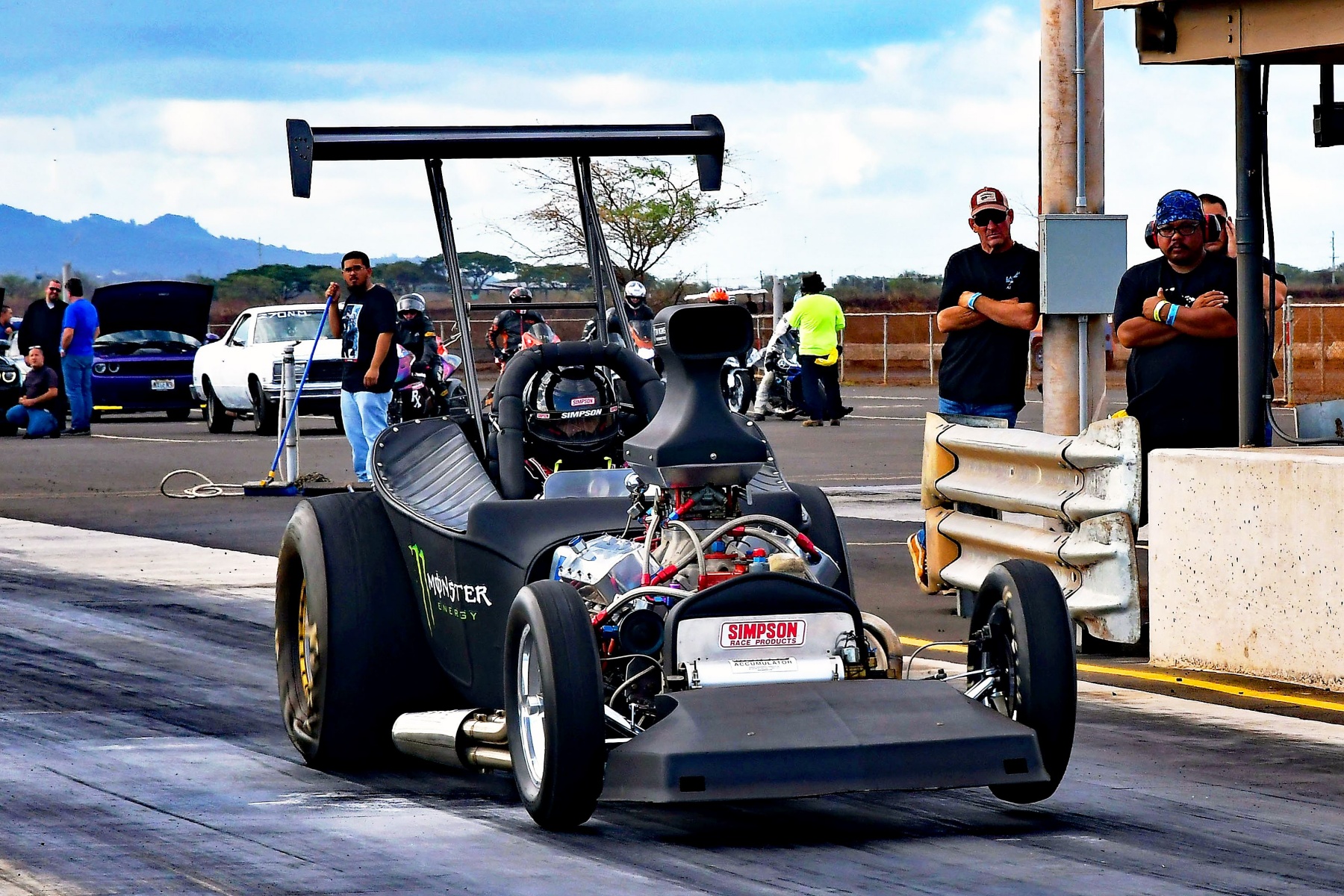 Approximately 2,000 miles away from the mainland United States, Hawaii’s picturesque vistas may be ideal for vacationers, but its isolated location presents a monumental set of challenges for racers. Kyle Shimizu, 32, doesn’t make excuses – he’s pursuing his goals without letting anything stand in his way.

Growing up on the island of Oahu, Shimizu has always been around racing thanks to his father, Thomas Shimizu, who raced a ’68 Barracuda. When Kyle was born, the ‘Cuda was put on hold to focus on ohana (family) but, as Kyle got older, the Shimizu men started up again with a grassroots-style drag racing endeavor.

“It was a very simple operation. We would drive to the track, put slicks on, Dad would run 12s, we would take the slicks off, and drive home,” recalls Shimizu of where his obsession was born. “My dad is a Mopar guy, but I’ve always been interested in Camaros.”

Sadly, Oahu’s only dragstrip, Hawai’i Raceway Park in Campbell Industrial Park, closed in 2006 – the same year that Kyle got his driver’s license. With a relentless passion for the sport but no place to race, he found an alternative.

“I had an ’02 Audi A4 with a bigger turbo and some other parts. I hadn’t ever been down the track, so I thought my sub-400-horsepower car was fast,” laughs Shimizu, not proud of the fact that he often went street racing and highway roll racing with friends. Having no safe, sanctioned dragstrip available to Oahu’s enthusiasts, and despite efforts by residents to secure a new facility, the street racing scene grew exponentially. Consequently, police cracked down on illegal activity and strengthened restrictions on modified cars. “We used spotters and had radar jammers and would all watch out for each other.”

In the meantime, Shimizu’s father had been racing a rental car in Maui. “He would fly up, run an embarrassingly slow Nissan Versa just to scratch his itch, and then fly home,” Shimizu says, proud of his father’s motivation to do what he loved, no matter what.

Eventually, Thomas put together his “Hawaiian Hurricane” Plymouth Duster. He sent it to stay with the family’s cousins, Shawn Motonaga and Christian Motonaga, serious drag racers and owners of Nextgen Auto Center in Kahului on Maui. The situation enabled Kyle to finally make his maiden trip down the dragstrip in 2017. “My first shakedown pass was 13.89 at 82 mph lifting through the lights. It was unreal!” proclaims Kyle, who shares his father’s spirit. 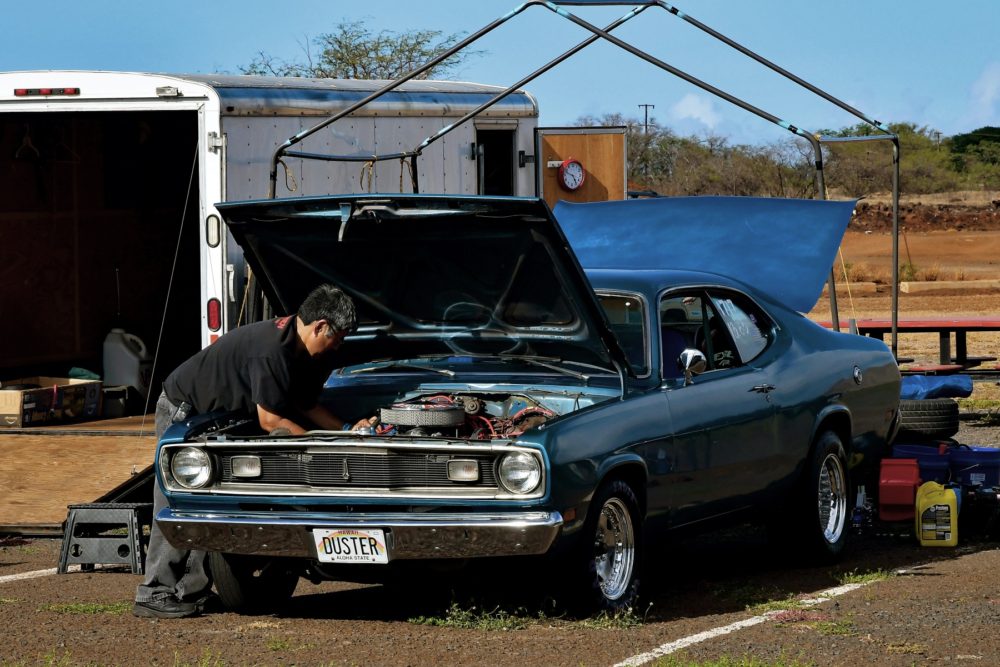 Not long after his inaugural hit, Kyle started looking for a car of his own. He knew it would be easier to purchase someone’s turn-key operation that was already on Maui, instead of building and transporting something new, and found a ’23 Ford T-bucket Altered roadster for sale.

“It had a big-block Chevy and ran 7.90s, so I figured I’d just detune it,” explains Shimizu, who wound up doing the exact opposite as the prior owner convinced him to jump in and hit it with all the power off the line. “It was crazy fast, comparatively. I spent a year getting comfortable so I wouldn’t hurt someone else while I learned to handle the Altered. I got the highest level of safety products they sell – thanks to Simpson Race Products for that!”

Shimizu made his first 7-second quarter-mile run in October of 2019, and a best of 7.77 at 170 mph, but he was only able to attend two races with his “Little Monster” Altered after obtaining his license as COVID-19 hit in March of 2020 and shut everything down in Hawaii.

“Our cousins have been incredibly generous letting us stay with them and helping so much,” shares Shimizu, grateful for the assistance he’s received to ease the logistical difficulties as other racers often have to spend thousands to fly themselves and their cars from island to island just for one weekend. “It’s still a bit of a struggle, though, if I have to do maintenance or tear down the motor. I fly over, take it apart, and fly back home.” 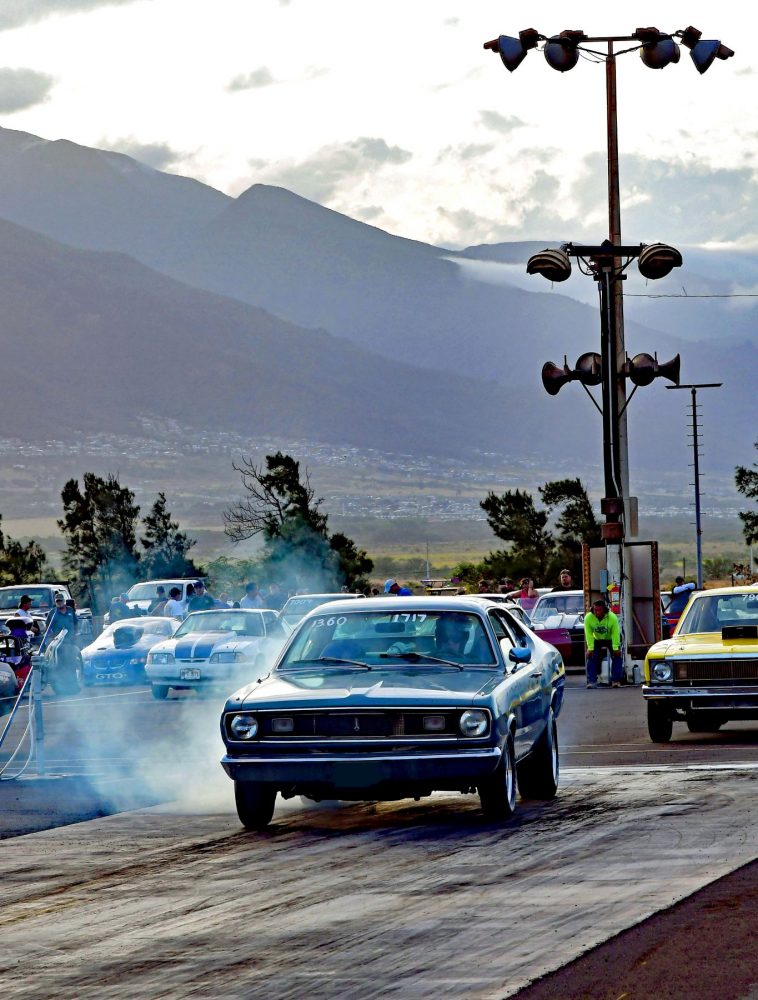 It’s definitely not an ideal scenario to island hop just to get to the track, but Shimizu refuses to let anything stand in his way and is making the most of the tough situation he’s been given.

Although he’s currently a sportsman in his endeavors, Shimizu does have a very serious doorslammer project he’s working on. “It may take me years to get there, and I might fail and run out of money part way through,” assesses the ambitious driver who maximizes his resources by buying take-offs and used parts, “but I’m OK with that, because at least I can say I tried to chase my dream instead of just having talked about it.”

Shimizu idolizes drivers such as Erica Enders, Melanie Salemi, and Stevie “Fast” Jackson – three of the finest and fastest in drag racing. He hopes to follow their footsteps someday and is thankful for their continued advice.

As of April 2021, the state of Hawaii is limited to only three dragstrips: one each on the islands of Kauai, Maui, and the big island of Hawai’i itself; racers on Oahu still remain without a place of their own.

For Shimizu, though, it’s more important to spend time with his father and make memories than it is to set records and win races and he wouldn’t trade the experience for all the success in the world. “Getting to race with family is a dream come true,” notes the young man.

His “ohana” attitude, combined with his passion for drag racing, guarantees that no matter what he winds up running, or where it takes place, Shimizu will find true satisfaction.