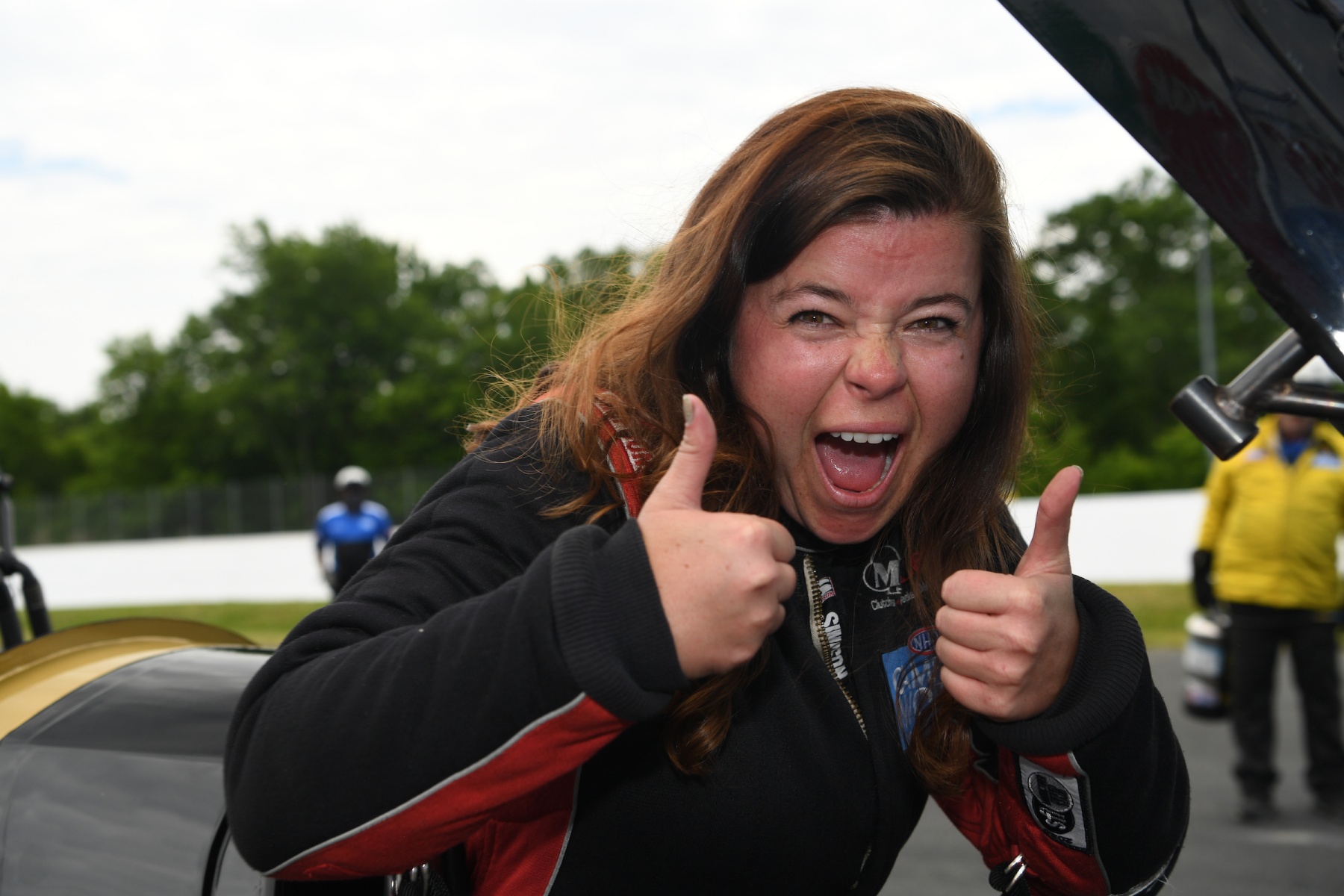 In the polished, corporatized world of NHRA nitro racing, it can be rare to see real, unfiltered emotion and excitement. In Top Fuel, drivers expect clean runs to the finish line, and anything less than a couple round wins is a bit of a letdown for most of the teams that follow the full Camping World Series tour.

But for part-time, independent teams and new drivers like Krista Baldwin, passes in the 3.80s and a first-round win over the megateams are causes for celebration. The third-generation Top Fuel driver checked off a couple of those accomplishments at the NGK NTK NHRA Four-Wide Nationals at zMAX Dragway in mid-May, and she rightfully celebrated in a big way.

Baldwin’s first major moment of the weekend came in the second qualifying session when she recorded her first 3-second pass under power to the finish line and first pass over 300 mph, a 3.92 at 314.17, in the McLeod Clutches/Strange Engineering/Lucas Oil dragster owned by her grandfather, the legendary Chris “The Greek” Karamesines.

“I was just excited I made it to the finish line,” says Baldwin, the creative director at McLeod Clutches and Paul Lee Racing. “But to amp that up, the DSR guys were down there and when they told me what I ran, that 3.92, I was so excited. So, so excited because I knew that I finally made a 300-mph run and I was able to solidify my spot in the show, which is much bigger than what we were able to accomplish in Gainesville.”

It just kept getting better for Baldwin, who qualified No. 14 to line up against Don Schumacher Racing’s Leah Pruett and Antron Brown and Kalitta Motorsports’ Shawn Langdon in the first-round quad. Baldwin admits she felt the odds were stacked against her in the loaded opening round, but she pulled off her first-ever round win in Top Fuel. Her 3.855 at 319.52 trailed Brown’s 3.804 but put her ahead of Langdon’s 3.947 and Pruett’s 4.31. Plus, it was a career-best performance in E.T. and speed.

“I absolutely could not believe that the racing gods were on my side and I was able to accomplish this,” says Baldwin, who got her shot in Top Fuel after Karamesines retired from his 67-year driving career late last year. “Just the sheer fact that the people I was racing against are so tough. There’s no way on paper that I was supposed to win, but I guess it was my time. Man, it was so exciting.”

Baldwin was understandably thrilled when she rounded the corner at the turnoff and was directed over to the NHRA on FOX TV cameras. Her excitement hit a new level when she was told what she ran, resulting in an animated, energetic celebration

“It’s so special,” says Baldwin, who’s now the quickest Top Fuel driver in her family, edging out Karamesines as well as her father, the late Bobby Baldwin. “I just want people to know that driving these race cars is so much fun. It’s so much work, but it’s so worth it when you make a run like that. That was my genuine reaction. It’s still my reaction. I still love it. I’m getting excited just talking about it right now.”

Those two runs had a powerful effect on Baldwin and her team. For her, it was validation of the effort she’s put in so far, as well as shiny new material to add to her sponsorship pitch. For her team, which is led by Karamesines and includes tuning help from Bobby Lagana and a few DSR crew chiefs, it was proof that they’re heading in the right direction.

“For us to make two solid runs back to back like that, it shows that we have a program that will work and that if you line up against this race car, it’s not just a sitting duck anymore,” says Baldwin, who plans to run the Norwalk, Brainerd and Indy races. “It totally amped me up. The biggest goal is to be consistent. I want to roll into Norwalk and I want to continue to run 3.80s, 3.90s and just get more time in the seat.”