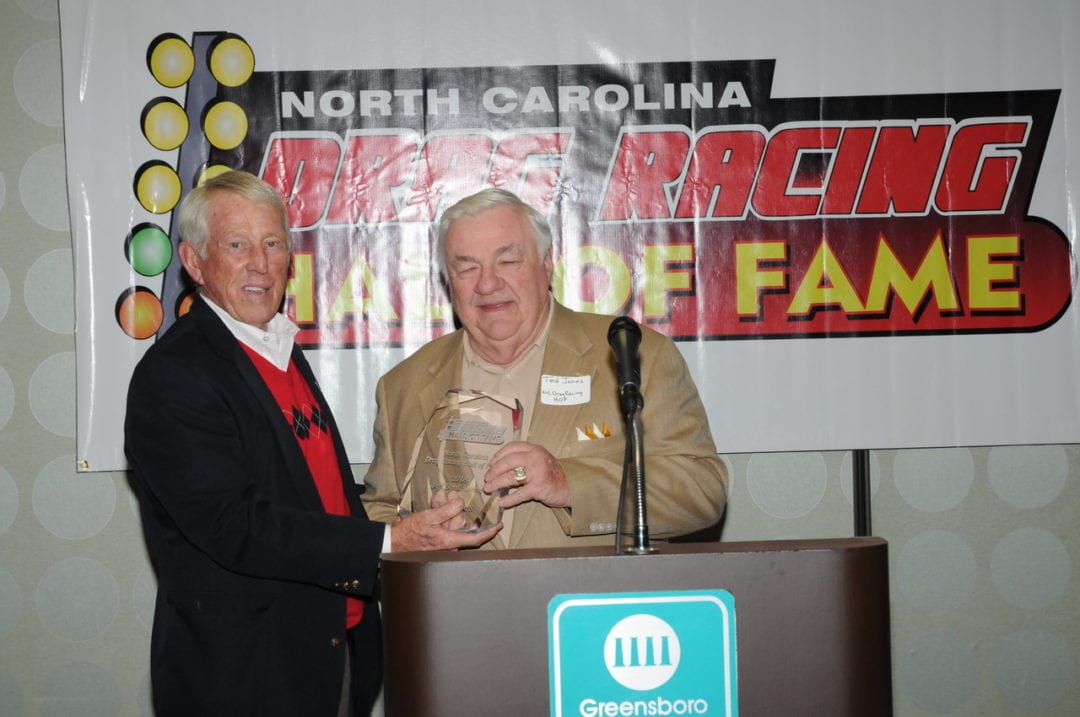 During the 1980s, the International Hot Rod Association was blessed to have the guidance of two forward-thinking men that made the organization a true force in our sport. One was former IHRA president Larry Carrier, who is given credit with bringing drag racing into the forefront when the series partnered with RJ Reynolds’ Winston brand along with past inductee Ralph Seagraves.

The other driving force during this time was a transplanted Ohioan named Ted Jones. Given credit with being the “Father of Pro Mod”, Jones worked with Jeff Byrd hand in hand through the hey day of the IHRA. Though his title was vice president, Jones was also the national race director, and, on occasion, announcer. It was his announcing that shown a spotlight on another talent: Ted’s voice, a voice that is heard many times today during one of numerous television shows or advertisements that are produced by the very successful Masters Entertainment. So it should be no surprise that Jones, who presented Jeff Byrd for induction into the International Motorsports Hall of Fame, should receive the Jeff Byrd Memorial Lifetime Achievement Award at the 2018 North Carolina Drag Racing Hall of Fame Awards Ceremony.

During the ceremony that would induct the 12th class, other significant awards went to Richard Harris, a fixture at Mooresville Dragway and Shuffletown Dragway. Harris received the Pioneer Award for his work at these and other tracks during the highlight days of Shuffletown, unfortunately too long ago shut down.

Inductees included Mike Bell, well-known for his driving abilities and success in the Roy Hill-owned Pro Mod Mustang, but also a great chassis builder and fabricator. Bill Furr, for his innovative contributions to the motorcycle drag racing crowd. James Lockhart, known for his familiar Oldsmobile, the only car he ever raced. Ken Regenthal, known for Pro Mod, Top Sportsman, and now his driving and sponsorship of the Classic Gear Jammers. Finally, Huston and Hubert Platt, Georgia natives who earned success and much prize money competing in the match-race circuit during the 1960s in the Carolinas.

Of note: this year, the now highly anticipated “Meet & Greet” drew so many former and present inductees that the number of tables had to be doubled from 6 to 12 to handle the overflow. A highly successful event and one that chairman Jim Turner and his band of elves hope you will make plans to attend in 2019.