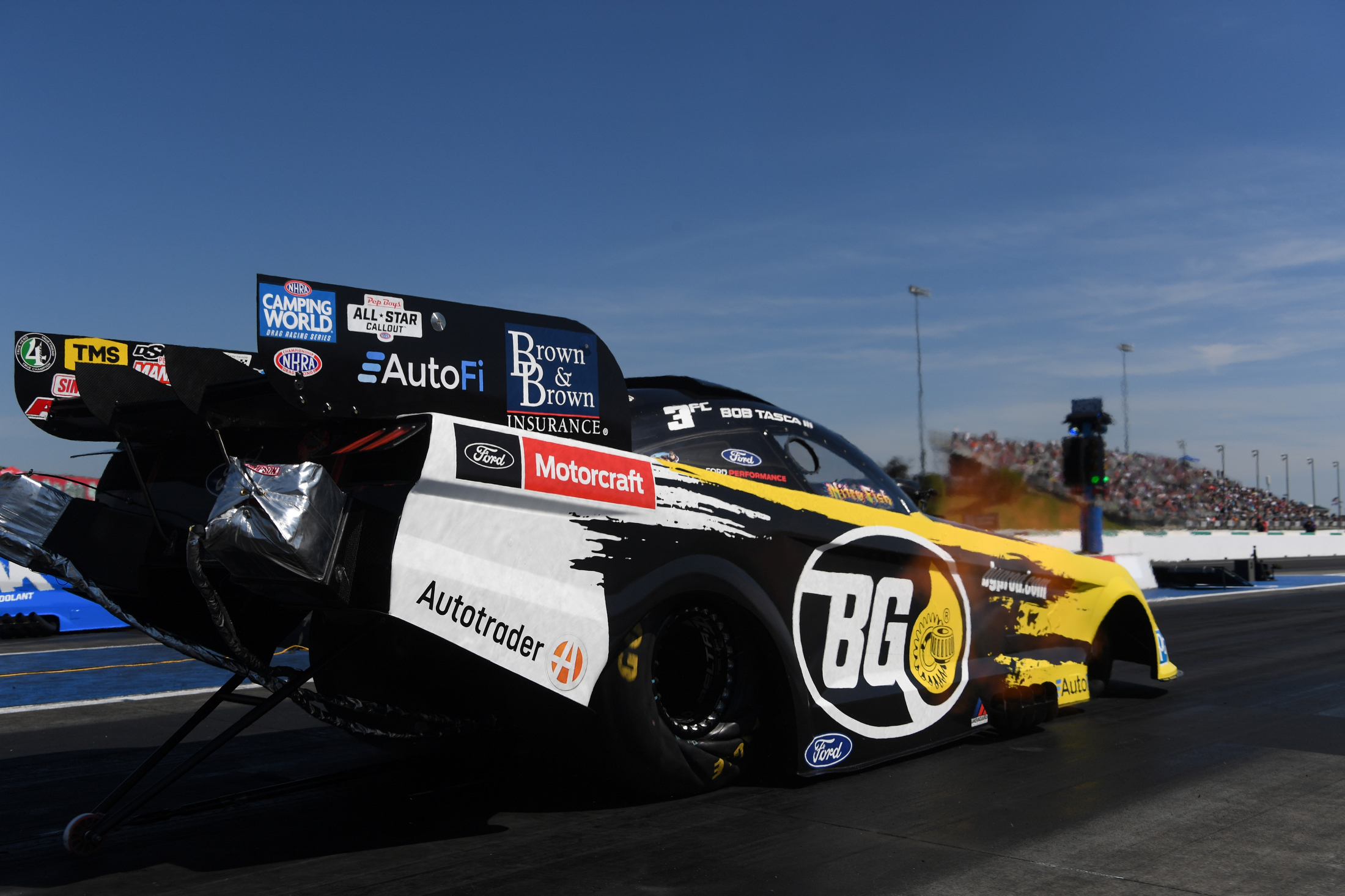 Bob Tasca III powered to the No. 1 qualifying spot for the second straight race on Saturday at Heartland Motorsports Park, securing the top position in Funny Car at the 33rd annual Menards NHRA Nationals presented by PetArmor.

Tasca’s run of 3.930-seconds at 323.81 mph in his 11,000-horsepower BG Products Ford Mustang held up from Friday, giving the veteran his ninth career No. 1 qualifier in the process. He’ll look for his second win in three races on Sunday, as well as his first career victory in Topeka, entering eliminations with plenty of momentum. In addition to Friday’s run, Tasca made the best run of Saturday’s two sessions to close out qualifying, going a stout 3.940 at 322.96 to end the day on another huge positive.

“That track is so good out there and this air is so hard to make power, but this BG Mustang showed them we’re out here making some real horsepower,” Tasca said. “Hats off to the guys, but I’ll tell you one thing, we got a yellow (No. 1 qualifier) hat in Seattle, and we didn’t get to trade it in for a blue (winner’s) hat. Tomorrow, we want to trade this thing in for a blue hat.”

Points leader Robert Hight, who is looking for his seventh win this season, qualified second thanks to his 3.931 at 323.81 from Friday, while defending event winner John Force’s 3.932 at 312.71 secured the third spot for the 16-time world champion. 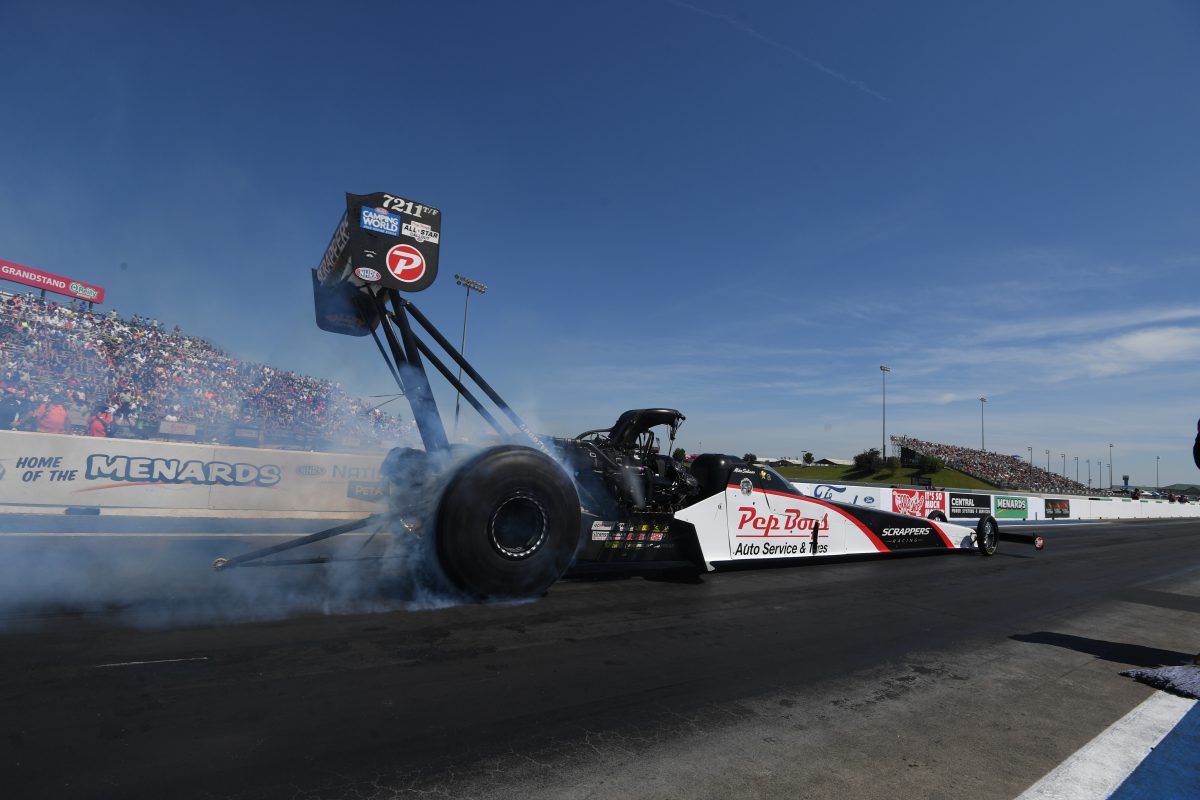 On the strength of his standout run of 3.754 at 323.19 from Friday, Salinas clinched his third No. 1 qualifier of the season in his 11,000-horsepower Pep Boys/Scrappers Racing dragster. It’s also the 11th career top spot for Salinas, who will open eliminations against Terry Totten. He made a solid run to close out qualifying on Saturday, giving the veteran confidence as Salinas, who is second in points, heads into raceday looking for his fifth win of the season and his first victory in Topeka.

“This year will be the best year in Top Fuel racing that I’ve ever seen,” Salinas said. “The competition is almost like a bracket car. It’s so close and you can’t make any mistakes. You have to be on your ‘A’ game every run and all the people we’re racing against, you can’t take any of them lightly because everybody is doing such a great job. Look at how close the fields are. It’s just amazing and I’m happy to be a part of this thing, and I’m happy to beat up on them, too.”

Two-time winner this year Justin Ashley qualified second with a 3.765 at 320.43 and Josh Hart took the third spot after his pass of 3.766 at 310.41 from Friday. Points leader Brittany Force qualified sixth. 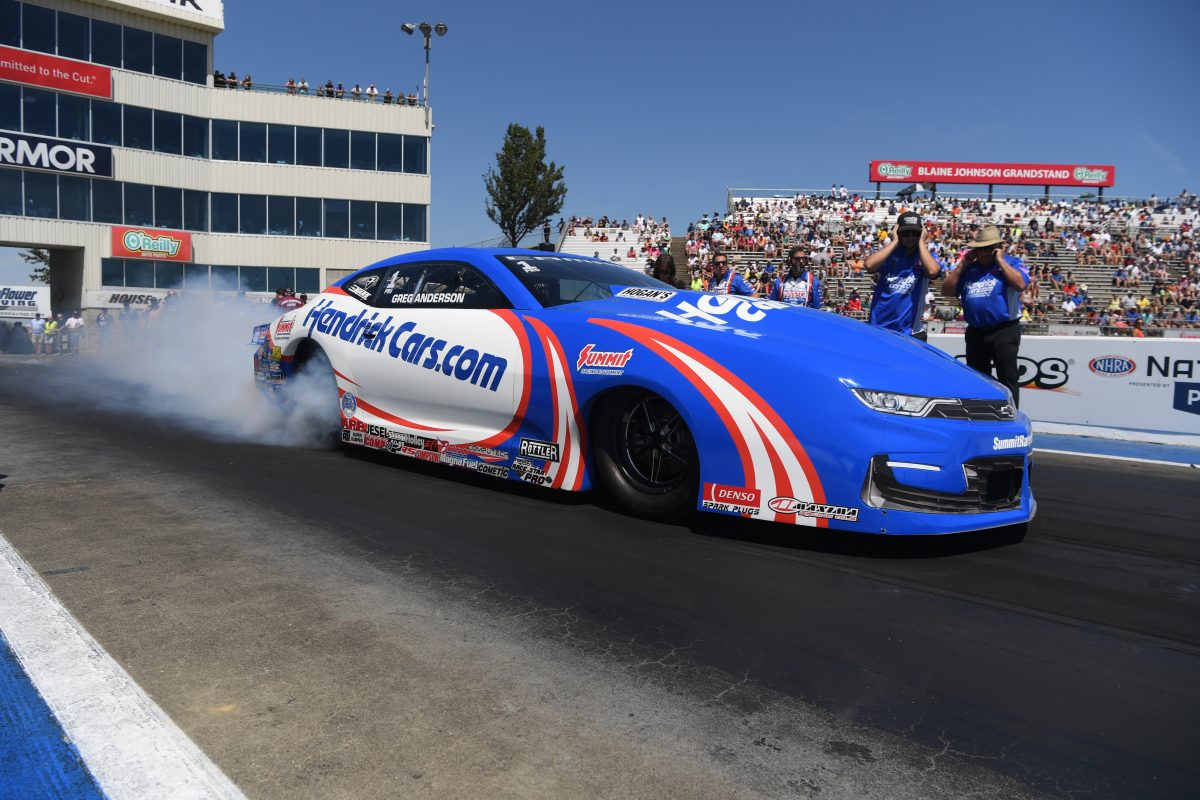 Anderson picked up his second straight No. 1 qualifier with his run of 6.623 at 205.44 from Friday in his HendrickCars.com Chevrolet Camaro. It gives the defending world champ his 120th career No. 1 spot, putting Anderson on a great path to claim his 100th career victory on Sunday. He made a pair of quality runs in the heat on Saturday at Topeka’s House of Speed, adding to his confidence level heading into eliminations, where Anderson will also try to grab his fifth career victory in Topeka, which would tie Warren Johnson for the most in Pro Stock history at the track.

“We’ve been working hard to catch up, trying to find horsepower,” Anderson said. “We’ve been able to improve the last couple weeks and we’re a legitimate player again, and we’ve got a chance to win again. We can absolutely contend for wins again and that’s great and all you can ask for when you show up to race. It’s been a bit of a long season, but it’s turning around and just in time for the playoffs. We’ve still got a chance to finish big.”

Seattle winner Troy Coughlin Jr. qualified second with his 6.632 at 208.04 from Friday, also making the quickest runs in each of the two qualifying sessions on Saturday. Points leader Erica Enders, who has six wins this year, took third thanks to her 6.632 at 207.62. 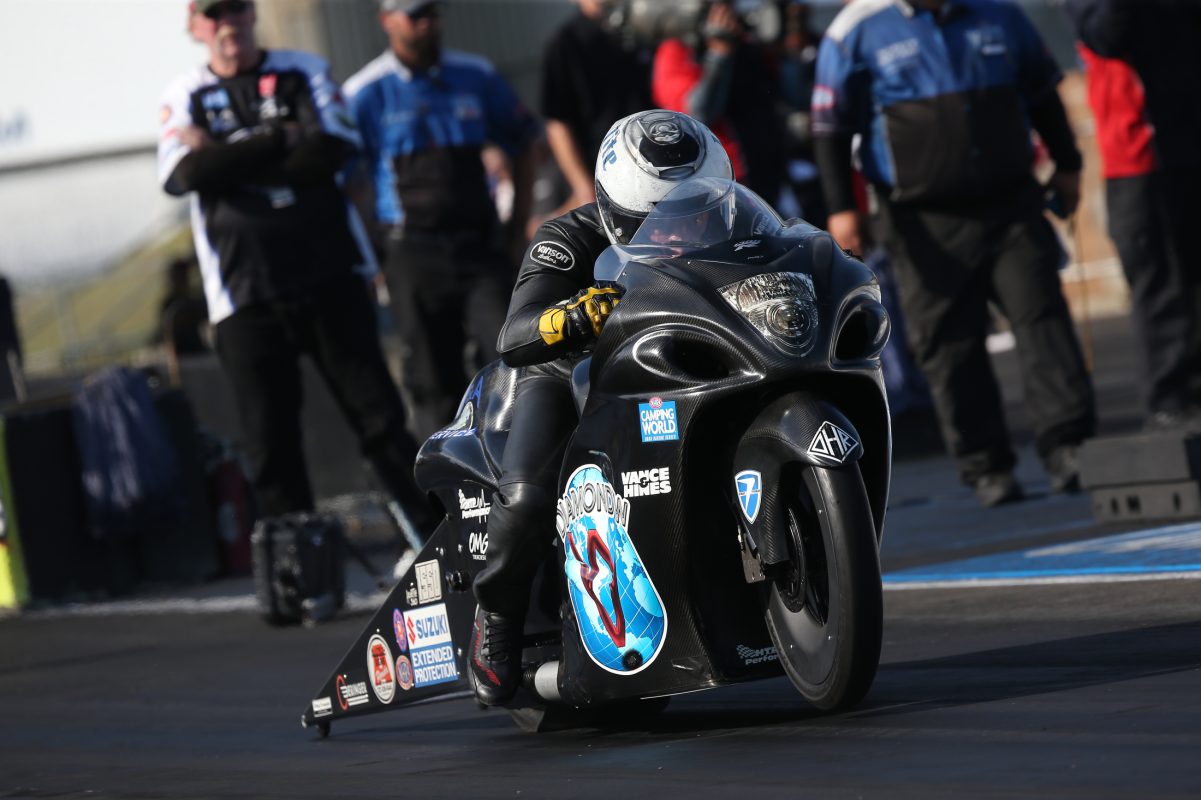 Gladstone earned his first career No. 1 qualifier in Pro Stock Motorcycle, as his outstanding run of 6.831 at 195.08 on his J&A Service Suzuki Hayabusa easily held up through two rounds of qualifying on Saturday. But Gladstone also impressed in those two sessions on Saturday, dipping into the 6.80s each time and making the quickest run in each qualifying session. Coming off his first career victory in the class, three impressive runs in qualifying gives him plenty of momentum heading into eliminations. He’ll also start raceday as the points leader, slipping past Angelle Sampey with his standout performance over the past two days.

“I hope this wave never crashes,” Gladstone said. “I’m enjoying this ride while it lasts and I’m so happy. I’ve been waiting my whole life for moments like this and I can’t say enough about my team and how much fun we’re having. They’re so great and I’m so thankful for all they do and allowing us to come out here.”

In the FuelTech NHRA Pro Mod Drag Racing Series presented by D-Wagon, Khalid AlBalooshi qualified No. 1 with a run of 5.840, but the former world champ fell in the first round to J.R. Gray, who went 5.892 at 245.85 to win the opening round of eliminations. Points leader Kris Thorne, who already has three victories this year, also won in the first round with the best run of the opening stanza, going 5.854 at 247.79. Eliminations for the Pro Mod race, which is powered by M&M Transmission in Topeka, will continue Sunday.

Eliminations for the Menards NHRA Nationals presented by PetArmor begin at 10:30 a.m. CT on Sunday at Heartland Motorsports Park.