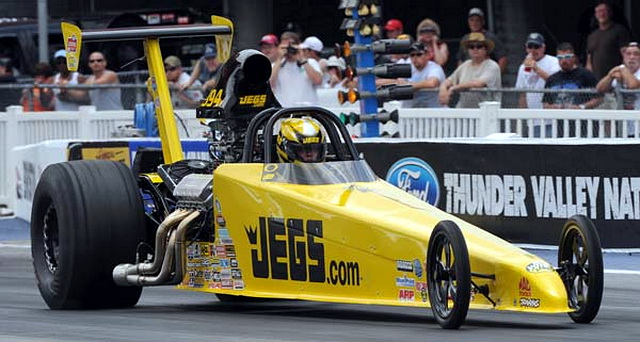 The lure of a big paycheck will once again draw many of the country’s top E.T. bracket racers to picturesque Mountain Park Dragway in Clay City, KY, for this weekend’s seventh annual Ultimate 64 Shootout presented by JEGS and Troy Coughlin Jr. wouldn’t dream of missing the action.

Coughlin plans to enter the eighth-mile event with his familiar yellow and black JEGS.com dragster and he has his sights set squarely on the $50,000 top prize. 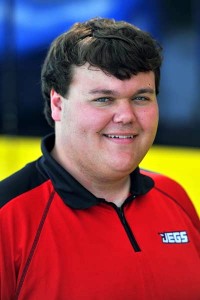 “That’s what we’re all going for,” said Coughlin, who has already scored a $20,000 E.T. bracket racing victory this season. “I have never been to Mountain Park Dragway before but I hear it’s a very interesting place.

“I like this race because it’s only 64 cars which means that it takes only six rounds to win instead of the usual eight or nine at most big races. Of course, it’s not as easy as it sounds. This race is a shark tank. The 63 other racers are all tough and I’m really going to need to pay attention. You just can’t make a mistake and hope to win many rounds.”

The event will begin on Friday with a 64-car event that pays a generous $12,000 to the champion before proceeding to Saturday’s $50,000-to-win main event. On Sunday, there will also be a 32-car shootout for a $5,000 top prize. There will also be three separate $10,000-to-win events over the weekend allowing for the possibility of a very lucrative payday.

“I plan on racing in all of the events so there is an opportunity to make a lot of runs,” Coughlin said. “I’m also going to have my buddy, Kenny Underwood with me, and our new crew chief, Jay Schroeder. I think we’re going to make a pretty good team.”

Working hard to improve the mental aspect of his racing program, the 21-year old, third-generation racer has recently begun to take an interest in sports psychology, and is in the process of reading the highly touted book, Mind Gym, by Gary Mack and David Casstevens. Although the book does not deal specifically with motorsports, Coughlin has found it to be extremely helpful.

“In this book they talk about the seven Cs which are competitive, control, consistency, composure, confidence, courage and commitment. All of them apply to driving a race car and the mental aspect of bracket racing,” Coughlin said.

“I love the challenge of trying to make myself a better racer. It’s hard sometimes, but I’ve been able to see steady progress and that makes it all worthwhile. This race will be a perfect opportunity to use some of the things I’ve learned.”