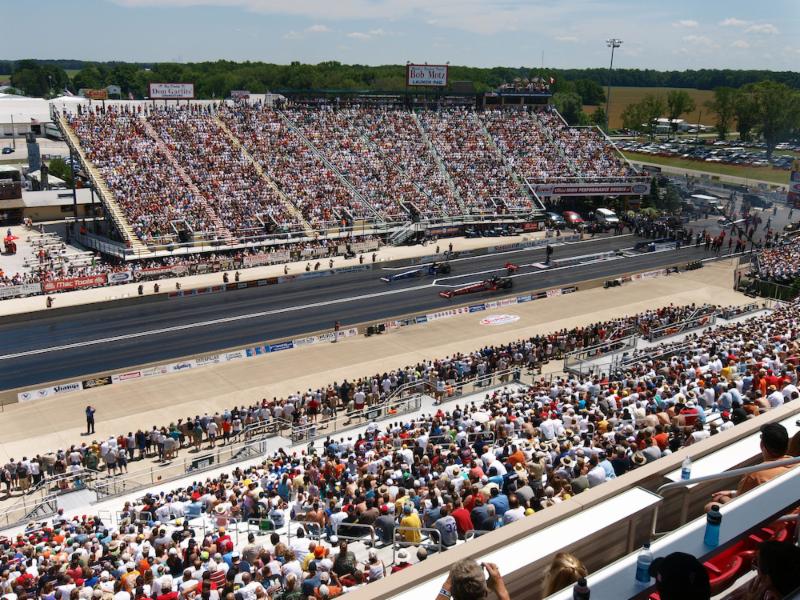 As the president of a motorsports venue that annually welcomes more than 500,000 fans for sportsman and professional drag racing, Bill Bader, Jr. was proud to announce the installation of a state-of-the-art lighting system in 2016 to illuminate both sides of the track surface at Summit Motorsports Park in Norwalk, Ohio.

Designed by Musco, it cost $400,000 and features 15 steel poles on the Budweiser side of the park from the head of staging to the sandtrap, where an additional pole is located on the Summit side of the park.

But recently, a ruling involving the Ohio Department of Transportation and the Federal Aviation Administration orders the removal of three light poles on the park’s property that are in proximity to the small Huron County Airport, including one which has been in place for nearly 20 years, despite Bader, Jr.’s willingness to install safety lights and reflective tape on each of them.

“The closest light pole is 280 feet, nearly the length of a football field, away from the southern edge of the airport runway,” said Bader, Jr. “The Huron County Airport is a visual approach airport. As such, no pilot is permitted to drop his or her aircraft below 600 feet unless the runway is in plain sight. Our light poles are 60 feet tall, which means that an airplane is 540 feet above our poles. For an airplane to hit one of our light poles, a pilot would need to violate approach rules by dropping 540 feet below the required minimum of 600 feet and be off course by missing the actual runway by nearly 300 feet.”

According to Bader, Jr., if implemented, the ruling would threaten the survival of internationally-known Summit Motorsports Park, as the lighting system is required for several of its annual events, including the Summit Racing Equipment NHRA Nationals, which traditionally welcomes nearly 75,000 fans to the area. That, in turn, would threaten the $100 million in economic impact the park has been determined to have on the community, as nearly all of its visitors shop and dine at area businesses, stay at area hotels and visit area attractions. It also could mean the loss of jobs for 30 full-time employees and 428 seasonal employees at the park.

As word of the ruling has spread, supporters of Summit Motorsports Park have been calling, emailing and writing to Ohio Gov. John Kasich, state Rep. Dick Stein, R-Nowalk, state Sen. Gayle Manning, R-North Ridgeville, Ohio Department of Transportation Director Jerry Wray and other officials to urge them to present to Ohio Department of Transportation and the Federal Aviation Administration alternatives to the ruling to remove three light poles on the park’s property.

“Our family has been committed to the motorsports industry for nearly 45 years,” said Bader, Jr. “Everything we’ve worked to build is on the line and I’ll be damned if I’m not going to fight for it.”