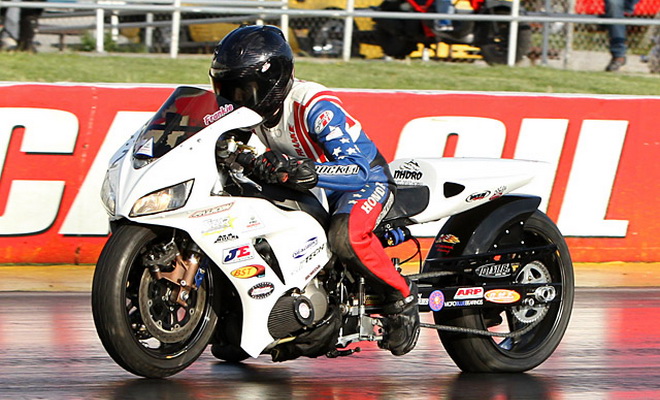 The Brickyard wasn’t the only Indianapolis speed facility to echo with the smooth sounds of turbocharged powerplants this past weekend, as the Midwest’s largest motorcycle drag racing series—the NHDRO—opened it’s season at Lucas Oil Raceway on the west side with the May Bike Fest.

In fact, weighing in at 1300 cc, a McIntosh Machine & Fabrication Pro Street turbocharged Suzuki Hayabusa puts out only 25 horespower less than its much larger, twin-turbo, V6 cousins over at the Speedway. And a Pro Street bike puts that horsepower to the ground through one small, street-legal tire—not two massive slicks.

Frankie Stotz and his Honda CBR1000RR don’t even need 1300cc’s to get the job done. Second-generation racer Stotz was the underdog in the final against Bud Yoder, who laid down a 6.970 at 208.68 mph while taking out number 1 qualifier Jeremy Teasley in the semi on his new ‘Busa. Stotz took the tree, but after near-equal 60 foots the Honda wheelied. Yoder thought he had the race in the bag until the ‘Busa skated out of the groove. As he pedaled it back towards the racing line, he saw the white Honda streak past for the 7.24 to 7.45 win. Phil Paoleno won Pro Street B.

Turbos were the power-adder of choice in the Schnitz Racing Pro Comp eighth mile class this weekend as well. But the turbo-methanol Kawasaki Funnybike of champion Mark Paquette struggled from the moment it rolled out of the trailer. Paquette made it to the semis, where he was put back on said trailer by Chris Cutsinger.

Although Cutsinger’s turbo ‘Busa continues to develop positively, it was positively no match in the final for the finely broken-in gas/turbo/nitrous Kawasaki of rider Keith Lynn and owner/tuner Roger Gordon. The term “bracket bike” gets thrown around a bit too often, but certainly applied to the candy apple red Kaw this weekend. Lynn qualified number 1 with a 4.11, ran 4.11 in round 1 of eliminations, slipped to a 4.13 in the semis, and rebounded to an .11 in the final for the win over Cutsinger’s 4.47.

Ohio’s Bradley Shellhaas sailed through the Route 21 Top Gas 8.20 index field from the number 1 qualifying position to take the win over Greg Mallett in the final. Shellhaas’ .015 light was the prime determining factor as both bikes ran within .001 of each other.

With Jeremy out in Pro Street, the Teasley family honor rested on the shoulders of his younger brother Cameron in Catalyst Racing Composites Crazy 8s. And despite giving up the tree by a wide .016 to .093 margin to fellow finalist Joe Robbins, Cameron was able to collect the win when Robbins broke out. Number one qualifier (and class champion) Ron Arnold uncharacteristically lost in round 2.

Tsukigi Racing Streetfighter is the only class that waited to the 2014 opener to decide the 2013 champion, and that honor went to Ben Knight on Saturday, with Nathan Hollingsworth winning the delayed race. Knight lost in round 1 on Sunday to yet another Teasley—oldest brother Brandon—who then lost to Keith Bobo in round 2. Bobo lost round 3 to finalist Shawn Books, who lost a double-breakout final to Ryan Schnitz. Number 1 qualifier Bernard Varner lasted until round 3.

The May Bike Fest included a visit by the always popular, shriekingly loud, 2-stroke Super Eliminator bikes—including a Water Buffalo Suzuki all the way from Australia! But Thad Neeld only had to come from Ohio to take the win when Gary Conners redlit in the final.

G&G Metal Spinners Pro ET wins went to John “Spooky” Markham over Jim “Put it on the Underhill tab” Underhill on Sunday, while Underhill won Saturday’s race over Tim Ganey in the final.

In addition to his Streetfighter championship, Knight also won Sunday’s Kevin Dennis Insurance Street ET in a double breakout final over Chris Doty, after runner-upping to Spencer Claycomb on Saturday.

Port-Tech Grudge saw hot action early as Jeremy Teasley beat Ryan Schnitz for 6 stacks in the light of day. Doug Gall and Teasley both rode the Joe Marasco built NHDRO grudge bikes “Thunder” and “Lightning” to wins. NHDRO promoter Brian Welch (after wife Niki left for the hotel, of course) even managed slip out of the promoter shirt and into leathers for two grudge races on “Lightning” deep into the unseasonably chilly night.

(Story and photo by Tim Hailey)