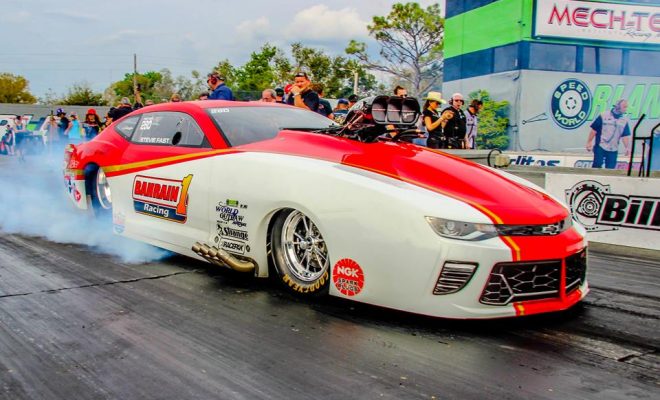 One of his latest is in regards to the upcoming DRAG ILLUSTRATED World Doorslammer Nationals, which takes place March 6-8 Orlando Speed World Dragway. The race will hand out $50,000 to the winners in both Pro Mod and Pro Stock, which is more than enough to pique the interest of the reigning NHRA Pro Mod world champion.

As for central Florida’s reaction to the inaugural event, that’s where Jackson’s prediction comes into play.

“They’re going to have to shut the highway off. You’re not going to be able to turn onto (state route) 50. If you cannot get to the track, it’s because you got there too late,” Jackson said. “I am absolutely head over heels about this event.”

Coming off the best season of his career and arguably one of the greatest seasons in Pro Mod or doorslammer history, Jackson will look to start his 2020 season in prime fashion in Orlando.

Splitting time between Pro Mod and Radial vs. the World, big-money race dot Jackson’s early portion of the year. The World Doorslammer Nationals rank high on the priority list, in part because of what the track means to him.

He estimates he first went to the track in the late 2000s, watching the stars of the doorslammer world compete at the World Street Nationals. Blown away by the atmosphere and the performances, it was a pivotal point in Jackson’s quest to reach that point in his own career.

“When I was a kid, the World Street Nationals were it. I dreamed about racing at that track,” Jackson said. “I remember rolling into Orlando and thinking I had made it. All the legends, that’s where they made their mark.

“I don’t know the last time there was a big-money, big-tire race on the East Coast. You don’t get to race in a facility as good as Orlando very often, so you know this is going to be a first-class event.”

Jackson had high praise for track owners Ozzy and Maria Moya, as well as track prep specialist Wade Rich, who will have the track at a supreme level during the first weekend in March.

That’s music to Jackson’s ears, as he’ll be ready to burn down the scoreboards in his supercharged RJ Race Cars Bahrain 1 Racing Camaro.

The championship-winning car was just fresh off the trailer this time last year, but it came out like a bat out of hell. Jackson was incredibly dominant to open 2019, going to the finals at the RPM warm-up race in Orlando, and following it with the quickest run in NHRA Pro Mod history (5.643-seconds) and another runner-up in Gainesville.

That keyed his championship season – the most one-sided title run in NHRA Pro Mod history – and Jackson is eager to try and repeat that.

There’s nothing Jackson and his team, led by standout tuner Billy Stocklin, like more than a good challenge, and the major one this year is trying to top 2019. A strong start in Orlando is the ideal scenario, and Jackson has no plans to hold anything back.

“Orlando is going to be the first time on an NHRA-type surface with NHRA-type rules for a lot of guys. You’re going to find out real quick on Friday where you stack up,” said Jackson, who won four races and went to seven NHRA finals a year ago. “I think you’ll see 30-40 cars there with a payday like this.”

It’s a payday that equals the entire NHRA championship payout in just one race, which is incentive enough to put your name in the hat.

Throw in a massive doorslammer fanbase for the area, and Jackson was hooked the minute the race was announced.

“Races like this, that’s the type of money we should be racing for,” Jackson said. “It’s going to be exciting. Being part of this class, it’s pretty special.”

And it’s a class that will have everyone’s attention in Orlando. They will share a marquee spotlight with Pro Stock and Jackson can already anticipate an electric atmosphere.

Add a victory and a $50,000 payday to kick off the season, and the popular fan-favorite is counting down the days.

“Winning is fun, but winning in front of a standing-room only crowd is a different ballgame,” Jackson said. “Central Florida is a hotbed for doorslammer drag racing, and Ozzy and Maria can promote a race. It’s going to be fun to watch them fill the place.”