Steve Torrence raced to his 11th win of the 2021 season, the 51st of his Top Fuel career Sunday, driving his Capco Contractors dragster to victory in the 56th annual Auto Club Finals and, in the process, securing an historic fourth consecutive NHRA series championship.

The 38-year-old Texan beat close friend Antron Brown in a final round match at Auto Club Raceway that proved somewhat anticlimactic after Brittany Force, the only driver who entered the race with any chance of overtaking him for the Camping World tour championship, failed to advance out of the first round.

By adding a fourth straight title to his resume, Torrence joined an exclusive group of seven pro drivers who have hoisted the championship trophy in four successive seasons.

He becomes just the second Top Fuel driver to satisfy the criterium, joining Tony Schumacher, who won six titles from 2004 through 2009. The other members of the group are Pro Stock drivers Bob Glidden and Lee Shepherd and Funny Car drivers Don Prudhomme, Kenny Bernstein and John Force,

Even though he won more than half the races contested during an abbreviated 20-race season and was the point leader after all but two events, Torrence couldn’t breathe easy until he reached the finish line ahead of an upset-minded Brandon Welch in the first round. 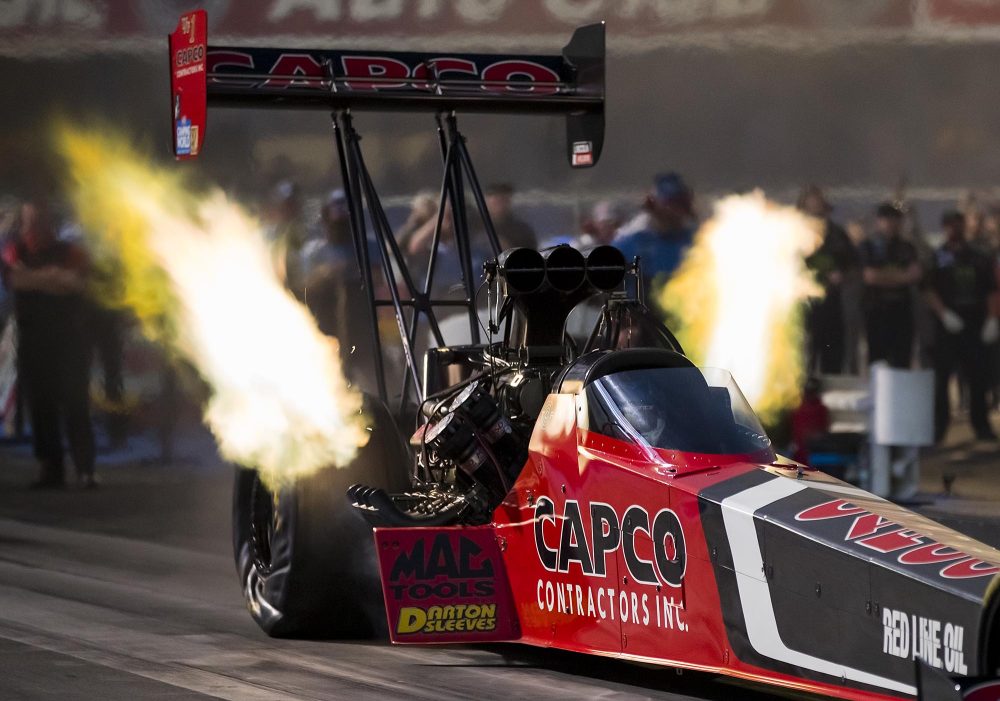 That gave him a lead that Force could not have overcome even if she had beaten dad Billy Torrence, driver of the second Capco dragster, in their first round match, which she did not.

“These Capco boys are amazing,” Torrence said of a crew led by Richard Hogan and Bobby Lagana Jr. “It wasn’t always pretty today, but we just kept grinding and somehow we managed to find a way to win. Thanks to all the Capco employees who stand up, stand tall and stand with us every day.

“To be out here with my mom, my dad, my wife Natalie and my little girl, I am truly blessed to be able to do what I do,” he said. “This is a great sport, a family sport and I’m just proud to be a part of it.”

Racing from his favorite starting position, No. 2, Torrence followed his victory over Welch by beating Doug Kalitta in round two and Cameron Ferre in the semifinals before beating Brown in the finale with a time of 3.759 seconds that delivered his 60th round win of the season.

After being ousted in the semifinals in the first two Countdown races, Torrence reached the finals in the last five and won three times. No one else had more than a single playoff win.