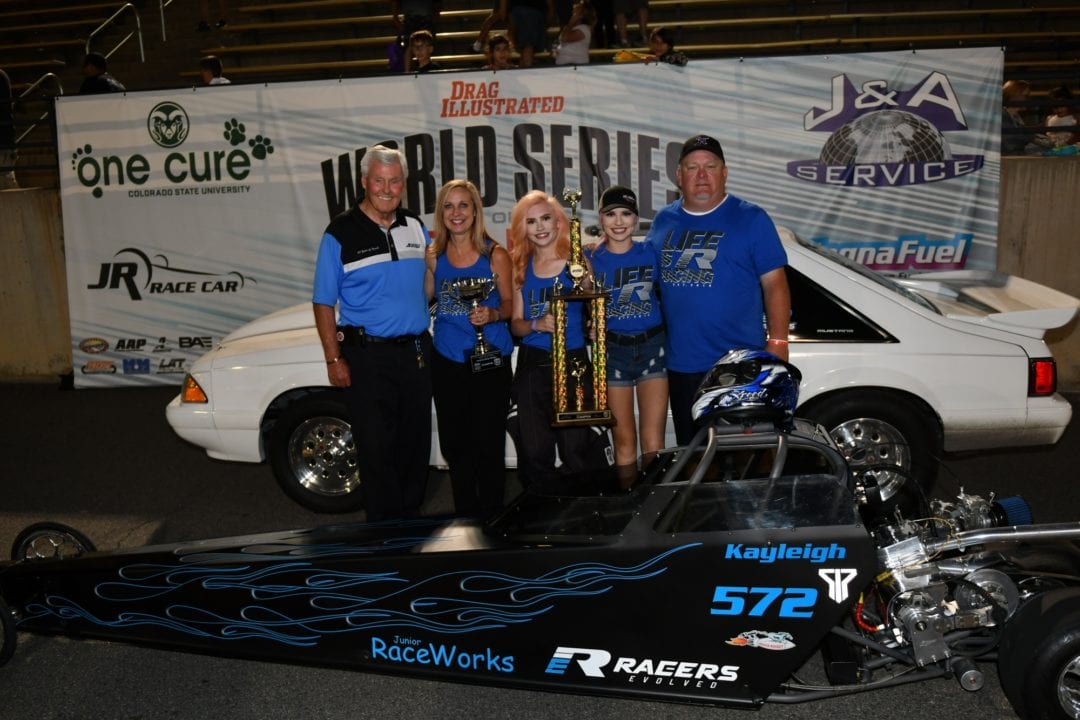 The DRAG ILLUSTRATED World Series of Pro Mod presented by J&A Service, Elite Motorsports, Big O Tires and benefitting One Cure is so much more than “the biggest, richest Pro Mod race in the history of the known universe.” The event also features sportsman racing with the area’s best racers converging on “Thunder Mountain” at Bandimere Speedway. Steve Hill and his family were among the dozens of Coloradan racers filling the pits and the staging lanes along with the stars of Pro Modified racing.

As Hill explains in this letter, the World Series of Pro Mod was a big weekend for the Hill family.

Sometimes, in the hustle and bustle of our society, we forget to reflect on the good things that happen to us.  No matter how big or small, we are looking for the next “high”, the next feel-good moment. Our lives move so fast that we often neglect to slow down and enjoy the moment. We move on too quickly in hopes of duplicating those great moments. Well, I am going to reflect, enjoy (again) and relive maybe my own personal greatest moment: the 2018 Drag Illustrated World Series of Pro Mod at Bandimere Speedway.

The Drag Illustrated World Series of Pro Mod is a three-day event put together by Drag Illustrated founder Wes Buck and Bandimere Speedway. The fastest Pro Mod race cars in the world are invited to Bandimere for a winner-take-all, $100,000 showdown. Also included in the weekend are MagnaFuel Quick Star, MagnaFuel Pro Star, JR Race Car 7.90 index and Sunoco King Street. The atmosphere is electric and the event is three days of absolute excitement.

In 2018, my family entered two cars for the weekend. My wife, Lisa Hill, entered in King Street in her 1993 Mustang and my daughter, Kayleigh Hill, was entered in the JR Race Car 7.90 Index race. We entered the track on Thursday and selected our pit spots. The weather forecast was perfect and I believe we all knew at that time we were in for a great weekend. We would not be disappointed. 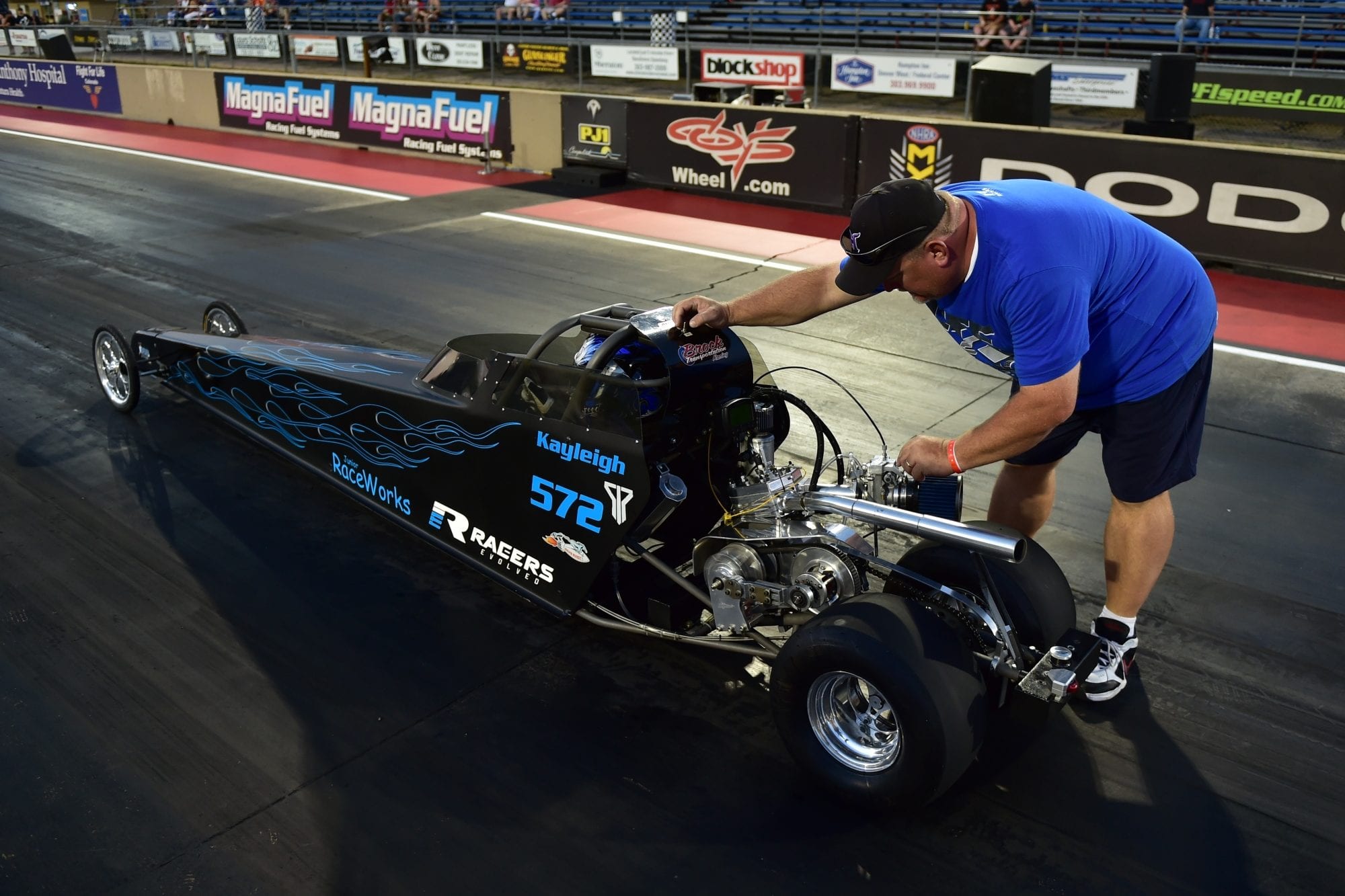 Friday was not only a test day, where we got to test our two cars and watch 5-second Pro Mods go down the track, but it was also Lisa and I’s 22nd anniversary. What a PERFECT way to celebrate. So, with my other daughter, Abbey, as head crew chief, we got some great practice in and qualified solidly in the two fields. We actually got the opportunity to sit down in the pits at the end of the day and have a small celebration for our anniversary, never anticipating what Saturday would bring.

We wake up Saturday morning to an amazing sunrise over the racetrack. It was at this point, something was different. Something just felt right. A feeling you cannot explain to anyone else. Even though I was not in a race car this weekend, I knew my two racers were up to the challenge.

Now, the perfect surprise. My brother and his wife show up to the track, which is fantastic in itself, but out of the car pop my mother and father. This is the very first time that they have been to Bandimere to watch any of us race. I had a smile on my face from ear to ear. At this point, my entire family is at the track!

We started racing Saturday afternoon with one more qualifier and then it was on to racing. Pro Mods were out first with the amazing Al Tucci on the P/A. These cars are just awesome. One 5-second pass after another. It’s sometimes hard to believe what you are watching.  After the Pro Mods were our two classes. First up, Kayleigh in her Jr. Dragster. We get the win racing against a dear friend, sad and happy at the same time. Next, Lisa wins first round and we move on.

Kayleigh and Lisa win round after round and keep advancing. Kayleigh’s Jr. is deadly and so is the driver. Sometimes I look into her helmet and her ice-blue eyes are SO focused. This was one of those days. Lisa also goes .000 reaction time in second round, followed up by a .002 in round three. Holy cow, is this really happening? Abbey and I are running around frantically reading our weather station, fueling cars, adjusting tire pressures, towing Kayleigh’s Jr. back to our pits. It was a warm summer evening and I “might” have been sweating a bit. Kayleigh and Lisa both make it to the finals. NOW, I am a nervous wreck.

First up, the Sunoco King Street final, where Lisa is paired up with a good friend in a fast 1969 Camaro. I stay back with Kayleigh in her Jr. Both cars leave and from where I was standing, I could not tell who was out front. I hear Lisa “whomp” twice and her win light comes on. I scream, “YEEEEEEEESSSSS.” Everyone looks at me like I am some crazed maniac. If the shoe fits…. 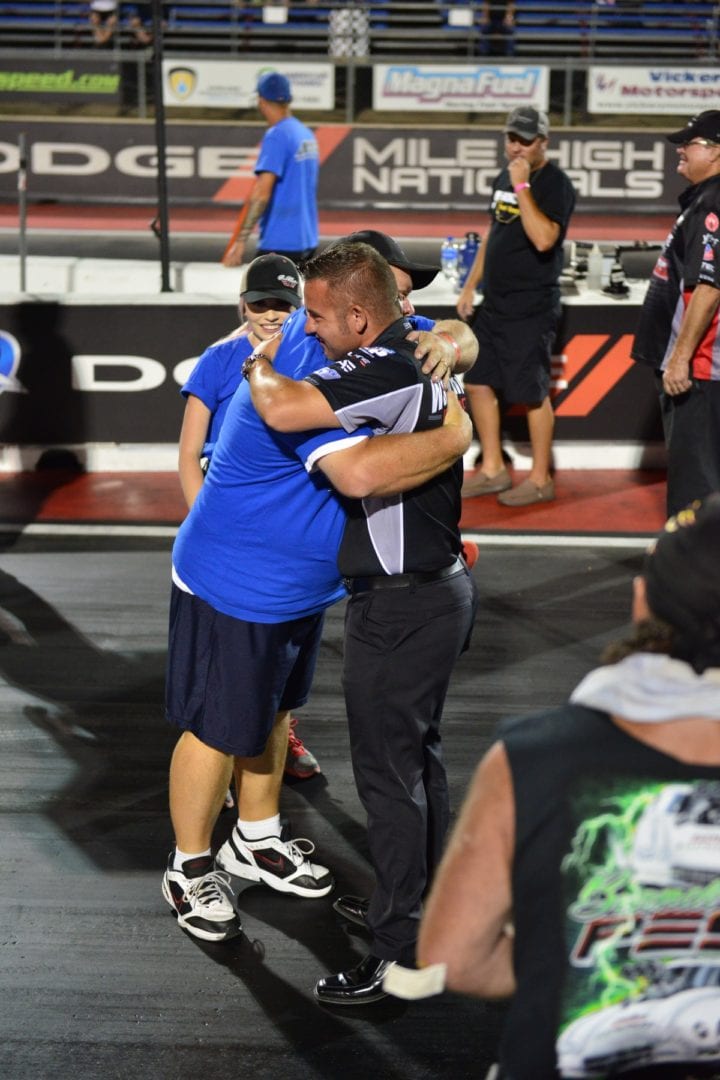 Next up, we roll Kayleigh under the tower and onto the track. She is racing another good friend and I know we are in for a great battle. Both cars leave the starting line and this race, I can tell we have the starting line advantage. I can still remember Ronnie Kohrt announce, “We will have TWO Hill race cars in the Winner’s Circle.” Abbey and I were going nuts. I get a congratulatory hug from Wes Buck and high-fives from everyone around. Meanwhile, Lisa has come back down the return road and is sitting in Winner’s Circle waiting for photos. As a family, we jump on our golf cart and go get Kayleigh to tow her back. First time I have ever had people screaming from the stands with congratulations. That is a pretty great feeling! We return to the Winner’s Circle, where Johnny Bandimere Jr. hands my two champions their trophies. Not a better hand shake in the world than one from Johnny. 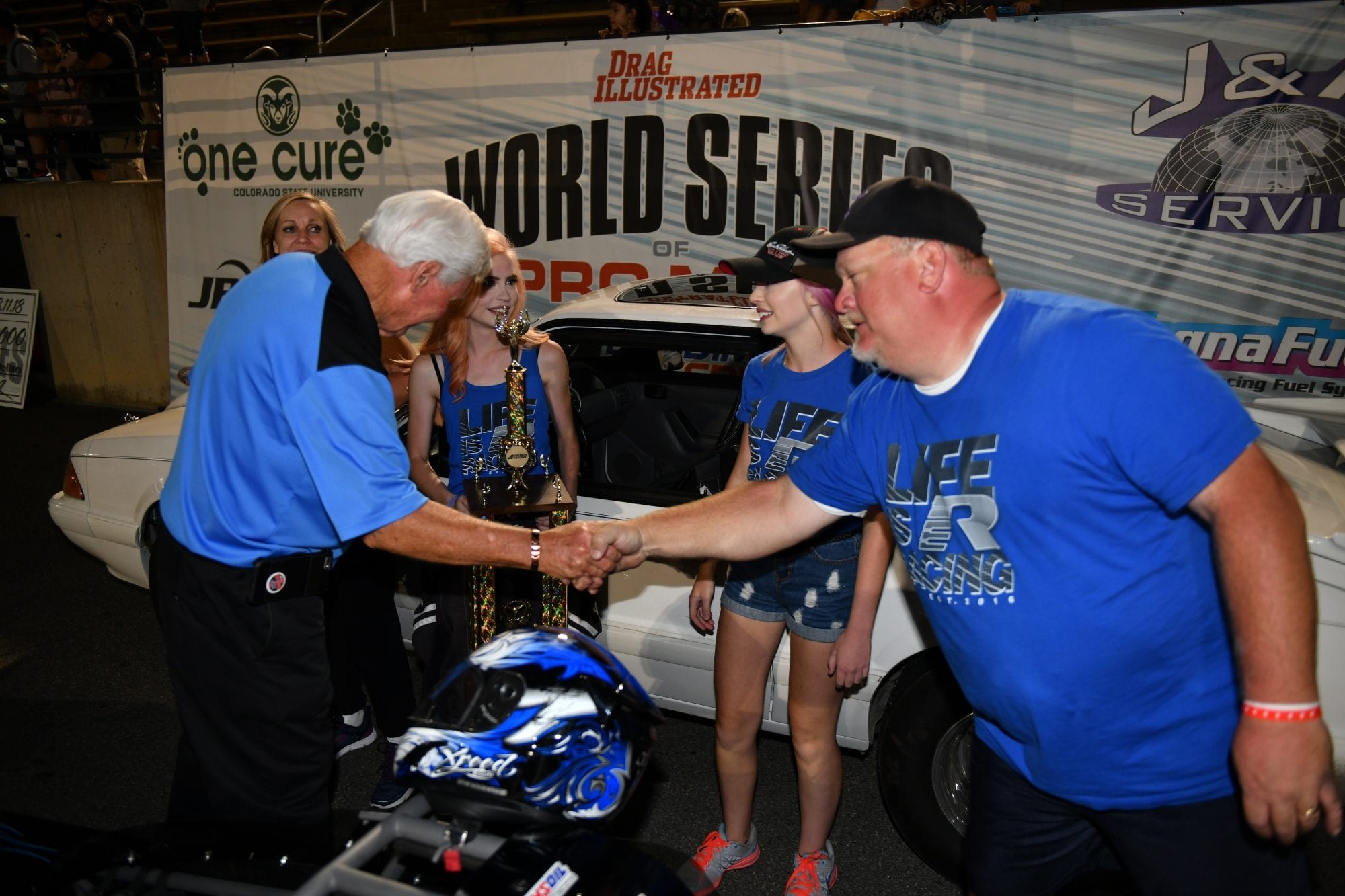 We finally make our way back to our pit area where everyone has gathered to pour water over the head’s of Kayleigh and Lisa, a tradition that is actually welcomed. Through all of this, I can hear my mom talking so excitedly about what she just witnessed. I get a huge hug from my mom, dad, brother and sister-in-law. Honestly, I was holding back tears when my brother and best friend handed me TWO ice-cold beers. I had earned those! We took more photos and stayed up pretty late with what seemed like 100 people in our pits. Yep, pretty much the best day of my life.

What makes this weekend even more spectacular is that in December, my mom was diagnosed with cancer and passed in March. She will never see us race again, but this memory will stay with me forever. Thanks, Mom, for being part of the best day ever!