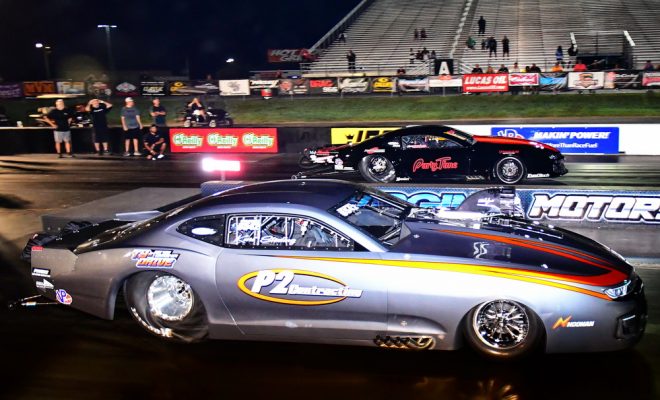 All finals from the PDRA Summer Shootout!

Kurt Steding and tuner Todd Tutterow didn’t waste any time getting Steding’s brand-new, Bickel-built P2 Contracting ’20 Camaro up to speed. In its first race in Pro Boost competition, the roots-blown entry carried Steding to his first-ever PDRA victory in his second final round. He left the starting line first and stayed in front through the finish line, posting a 3.719 at 201.49 next to Jason Harris’ 3.733 at 190.81.

“The car’s awesome, but it’s the team,” Steding said. “Todd Tutterow, his team and my team mixed together, we do the same thing every time. We get along great and we’re on the money. We mess up a couple things sometimes, but we pick it right back up. That’s what I love about this team. It wasn’t just me, it was this team.”

Harris earned his spot in his second consecutive final round by moving past Stan Shelton in the first round, then drove the ProCharger-boosted “Party Time” ’18 Camaro to round wins in two of the closest races of the event. He left first in both, using a 3.702 to defeat Randy Weatherford’s 3.704 and a 3.681 to beat Kevin Rivenbark’s 3.689. 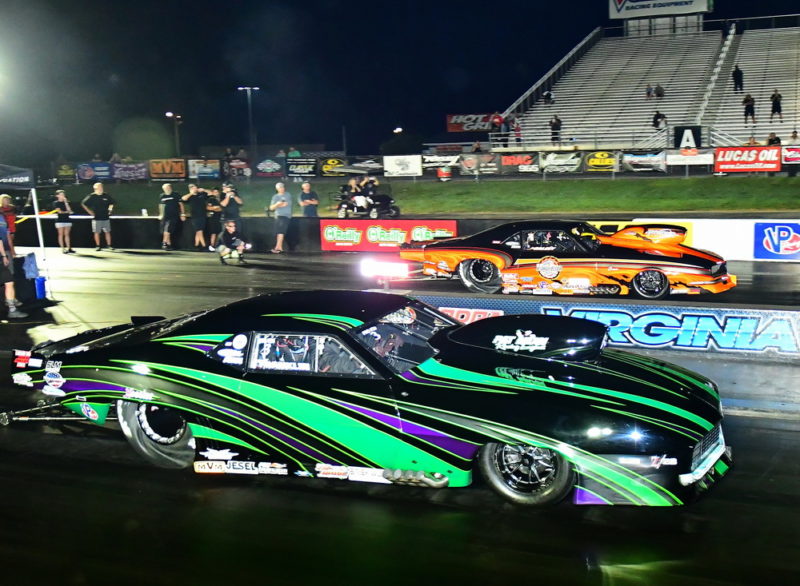 Two-time Pro Nitrous world champion Tommy Franklin won the first two races of the season, but a first-round exit at the last race, the Mid-Atlantic Showdown at Virginia, had him looking for a comeback. He found it on Saturday, as he finished the day with a 3.661-second, 204.08 mph victory over Jim Halsey and his 3.73 at 204.82 in the final round.

“We’ve just been picking at it all day and tried to race smart and get through there,” Franklin said. “That’s hard to do sometimes since we like to go fast. We didn’t really go for lane choice last round, but again, just trying to race smart. I wasn’t worried about lane choice because both lanes are stellar. My crew, they rock. Chris keeps it maintenanced. Todd, Chase, Blake, Amber, Ashley, my wife, Judy, we just keep at it. It’s good stuff. I’m as happy as can be. Thank the Lord for everything that we get to do out here. I’m pumped. It’s a shortened season, so we have to get every round that we can. That team right there [Halsey] is tough, so we’re just going to keep at it.” 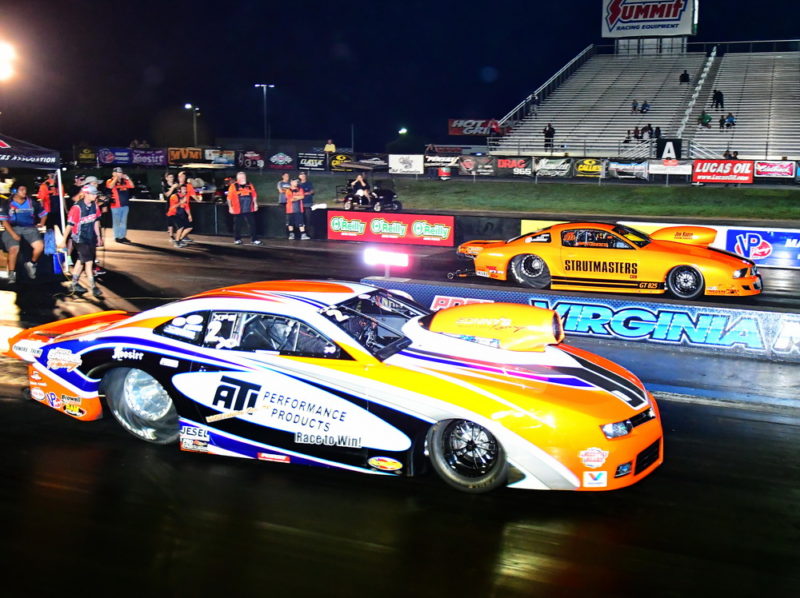 Back-to-back championships in Pro Outlaw 632 helped prepare Johnny Pluchino for his first full season in Extreme Pro Stock, where he’s won two of the three first races of the season in the Kaase-powered Strutmasters ’13 Mustang. He added a third win to that total when he grabbed a holeshot advantage and held off Chris Powers’ 4.103 at 174.59 with a 4.119 at 175.48 in the Summer Shootout final round.

“I’m shaking right now,” said Pluchino, who qualified No. 1. “I thought we’d have some success. I was hoping to be in contention for a championship going through the end. I know we’re far from over. This is still a tight, tight race. But this amount of success right now…I don’t know how to describe it. There’s not really a word to describe it. This has been a dream of mine for a really long time. My dad gave me this opportunity. Chip Lofton [of Strutmasters] gave me this opportunity and believed in us. It takes people like that. John and Brud were here wrenching on this thing. These guys put their heart and soul into this thing. There’s one thing about this team that separates us from the rest right now, and that’s heart.”

A No. 2 qualifying effort put Chris Powers in his Sonny’s-powered ATI Performance Products ’14 Camaro on the opposite side of the ladder from Pluchino. In the opening round, opponent John Montecalvo left before the tree activated and Powers ran a 4.127. He won on a holeshot over Elijah Morton in a 4.119-to-4.11 second-round match. He earned lane choice for the final with his 4.103 at 175.16 on a semifinal bye run. 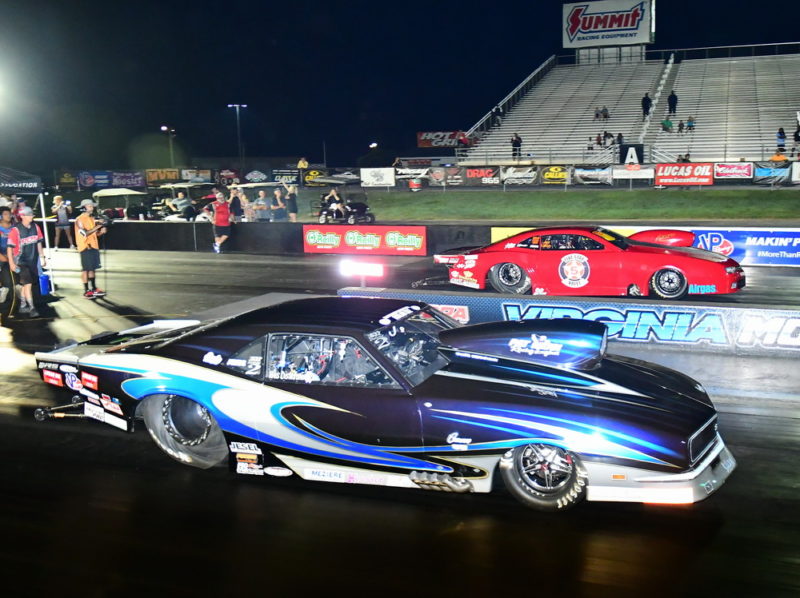 Pro Outlaw 632 newcomer Jimmy Pelcarsky declared he would win Saturday’s race after earning his first-ever low qualifier award on Friday night. He backed up that talk, winning the event and setting a new national record in the process. The Ohio driver ran a 4.153 at 171.45 in the final round, backing up the 4.127 at 172.67 he laid down in the semifinals to set the class E.T. record. Pelcarsky in his 480ci small-block-powered Five-Star Valet ’15 Camaro defeated points leader Wes Distefano, who ran a 4.22 at 171.18 in the runner-up effort.

“We worked so hard for this,” Pelcarsky said. “It’s unbelievable. I’m speechless right now. I can’t believe it. We came, we conquered. This means the world. We’ve been drag racing a long time, since the early ‘90s, late ‘80s – NHRA Pro Stock, IHRA Mountain Motor Pro Stock. This is a great feeling after all those years, we finally got some recognition. It’s awesome. I couldn’t be happier. I just want to celebrate.”

Pelcarsky and his Hutter-powered Camaro were locked in the 4.10s all day, beginning with a 4.193 at 170.32 on a first-round bye. He improved on his best run from qualifying by laying down a 4.172 at 171.21 to defeat Chris Holdorf’s 4.23 in the second round. Past world champion Dillon Voss went red next to Pelcarsky when he recorded the 4.127 in the semis, improving the record formerly held by Johnny Pluchino’s 4.163.

Distefano was appearing in his fourth consecutive final of the season in his Musi-powered $hameless Racing ’68 Camaro. He qualified No. 2 and used a 4.234 to beat Sam Freels III, a 4.255 to eliminate JR Ward and a 4.235 on a semifinal bye run. 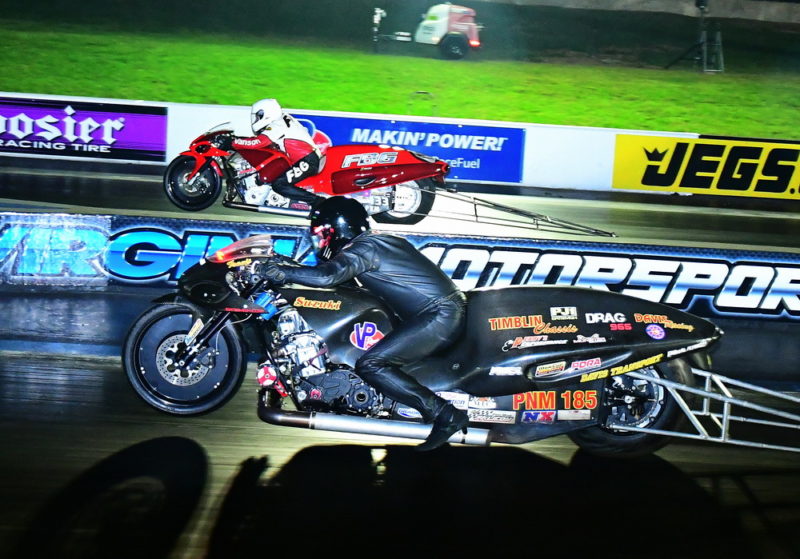 Two-time and defending world champion Travis Davis has owned Pro Nitrous Motorcycle this season with wins at both races the class attended before the Summer Shootout. Drag bike veteran Paul Gast broke the streak, though, earning a wire-to-wire victory over Davis at Virginia. Gast’s Fast By Gast Hayabusa left the line first and was quicker at the finish line, going 4.05 at 172.56 to Davis’ 4.078 at 173.70.

“Travis Davis is ridiculously tough,” said Gast, crediting crew chief John Schwartz for his efforts in the victory. “He’s beaten me a couple times now by .002 so I kind of almost owed him. But I was really on time for that final. I had a great light and a really good run. It’s really humid out. But the bike ran flawlessly. I’m really proud of how it ran, proud of the guys at Fast By Gast and proud of Travis too. He put a good fight out there and it was kind of my turn, I guess.”

Davis qualified No. 3 aboard his Timblin-built Hayabusa and kicked off race day with a holeshot victory over Mohamed Alawad. He left second in his semifinal race against Chris Garner-Jones but he held on with a 4.067 to beat Garner-Jones’ 4.097. 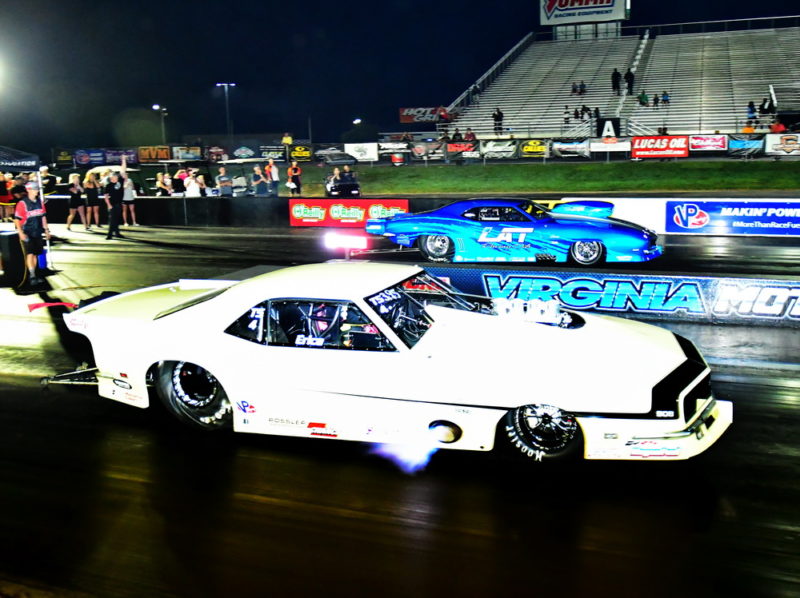 After starting the season with two runner-up finishes in his Musi-powered LAT Racing Oils ’69 Camaro, Virginia’s own Buddy Perkinson was hungry for his first Elite Top Sportsman victory. He earned it, cutting a .007 light and running a 3.879 on a 3.83 dial-in to defeat Erica Coleman’s break-out 3.945 on a 3.95 dial-in in her Fulton-powered ’68 Camaro in the final round.

Two Virginia natives were set to square off in the Top Sportsman 32 final round, but Glenn Teets III wasn’t able to make the run, allowing Mike Butler to coast to victory in his ’53 Corvette. 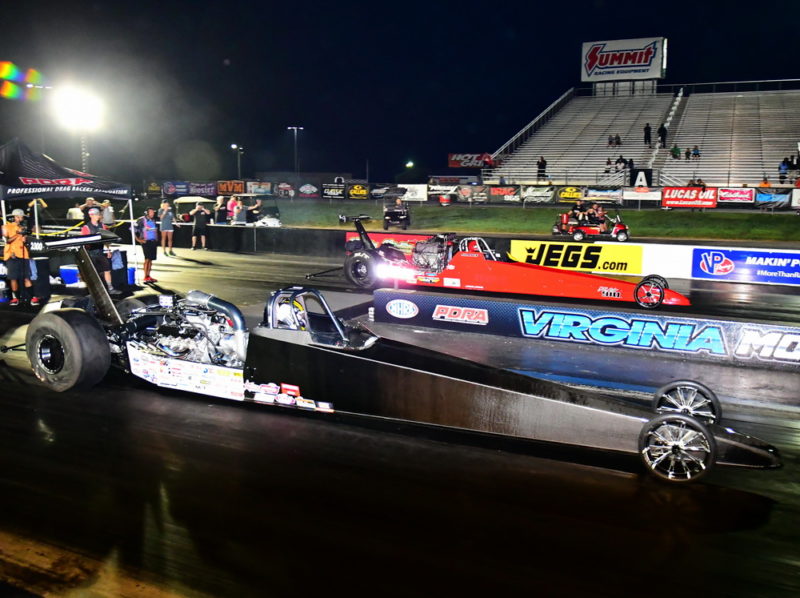 Consistent top performer Chaz Silance accomplished two things by winning the Summer Shootout in Elite Top Dragster. In the second round, he defeated Steve Furr, who leads Silance in points after winning the first three races. Silance capitalized on that by going on to win the event, going 3.832 on his 3.83 dial-in next to Carson Brown, who broke out with a 3.905 on a 3.92 dial.

The PDRA will have just over a month off before its next race, PDRA DragWars presented by Modern Racing, Oct. 8-10 at GALOT Motorsports Park near Benson, N.C.