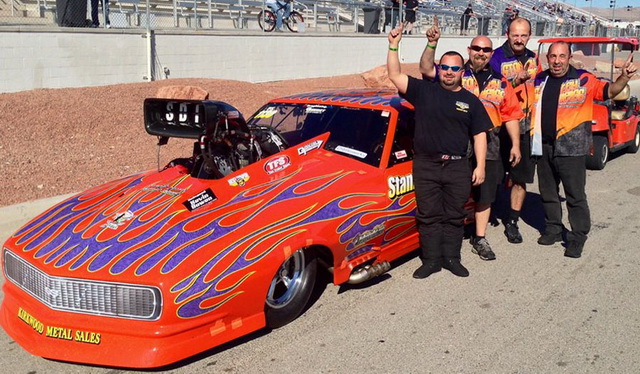 Those were the instructions that were relayed to me when I walked into the restaurant by the race track in Las Vegas on Wednesday morning for breakfast with the Sullivan Racing crew. Well shucks and heck and gosh and holy cow, what a way to start out what would end up being THE best weekend of racing we have ever experienced!

So I asked this not to be named West Coast crew member to relay back to the not to be named crew chief that my answer was: “Don’t sing it, just bring it!”. And that ladies and gentlemen, boys and girls was just how our fantastic 1/4 mile racing weekend began! And it set the stage for how these Left Coasters race. Just like Us-Ins they enjoy the camaraderie and the thrill of competition as much as we do. We were welcomed with open arms and it was indeed a pleasure to race amongst these teams! 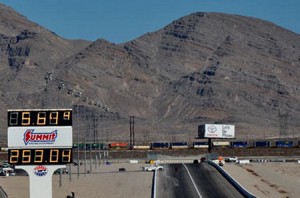 So after I was suitably berated and was put in my place by the “Big Dogs” we set about getting ready to make our mark, as small or as big as it may be on the PSCA scene. John, Scottie and Jimmy arrived with our great alcohol sponsors Krista and Eric Champ of Ridgeley Distributors around noon and we set out getting the car ready for a couple of time runs on Wednesday. We had changed the engine, transmission and rear end in the “Appalachia on Steroids” Camaro before loading it into the trailer for its trek across the US of A. So that meant setting the timing and checking all the little things that can get left undone in a front-to-rear changeover.

It all went pretty well till we realized that oil was POURING out the front of the motor after the warmup! We determined that some dumba$$ had let a spacer get turned a kilter and after I was abused because I was the culprit we set about pulling the blower off, cleaning everything and putting it all back together. We decided to forego the Wednesday testing and concentrated on making sure all was well with the car.

Thursday was to have two scheduled test sessions and off we went to the lanes for the first one. When it was our turn at the track John left go of the button and after 50 feet it was all over! Just way too aggressive we were. That taught us that our ADRL tune-up was not the answer, for sure!

So we calmed it down and tweaked Shannon Davis’ new prototype super-duper traction management device and went back to the lanes for the evening session. We were back to attempt yet again our FIRST EVER 1/4 mile pass in this six-year-old car. As I said in the write-up about coming out west, the Camaro had never been under power past the 1/8th mile in all these years! BUT when John left go of the button Da Orange Ho took a set and left as if it was shot from the proverbial cannon and never faltered! Straight and true as a string it was, off and marching on a pretty good mission. 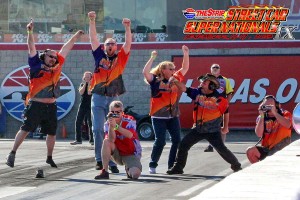 John had been left with the option of running it out the back if it felt good and if he was comfortable with what was happening. If not he could click it off whenever he felt, which he did about 950 feet in because he saw something blowing up on the windshield. And we were left with a showing on the boards of a 5.79 at ONLY 204 mile per hour! We didnt get the $1,000 for low ET, but what we did get was the attention of everybody there! Especially considering the car had ran 203 miles per hour to the 1/8th mile and we were number THREE amongst the baddest of the bad behind Mike Maggio and Eric Dillard’s El General world-record equaling 5.706.

The 5.60’s were now within reach of every player on the grounds. Hmmmmmmmm, how to top these juggernauts???

The Friday of Mel Roth’s Street Car Super Nationals was the opening round of qualifying for the actual race and now that the bragging rights and financial matters had been settled it was that time. We wanted to try and qualify in the top half of the field so we duplicated Thursday night’s tuneup with a few little miniscule manipulations and headed to the lanes. The “hitters’ were already at the head of staging wanting that “First to the .60s” bragging right and we patiently awaited our turn in our attempt to make our way into the top half of field.

Being the next to the last pair left us watch what had transpired before us, some of it good, some of it not so good. BUT when John cut the button loose and plugged the Camaro in second gear it was, as my good friend Steve Petty often says, “On like Donkey Kong!”

The Appalachia on Steroids hot rod lit up the scoreboards with an outstanding new world record run of 5.644 at over 253 miles per hour! And THEN as Bob Frey would say “The crowd went wild,” as did we!!! What was left to do was back up that run in the second session so there could be ZERO doubt that WE, the Little Team That Could as Patrick Budd had dubbed us those oh so many years ago, had indeed shocked the drag racing world. And back it up we did in the second qualifying run although we slowed down by .008 to a 5.648 at another 253 mile per hour run! And then for good measure in Saturday’s 3rd round we ran ANOTHER 5.60, this a 5.668 at again over 253!! We now also had the right to lay claim to the World’s Quickest Bracket Car!!! 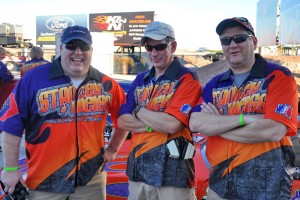 As Sunday dawned bright and beautiful it was time to race for real! All of the past days two days accomplishments now had to be put aside in order for us to attempt to reach the final round of the largest financially attractive race we had ever been involved in: 20,000 BIG ones!

The first round saw John use up all the of the left lane in a 1,363-foot speed contest, which he won over the rejuvenated turbo Camaro of Rich Zehring with a 5.71. But the NRE-headed Hemi was not a happy player during that run and as we frantically searched for our issue we ran out of time to get the issue rectified for the second round. Knowing that there definitely did not seem to be much difference between the lanes we elected to possibly give up lane choice in the semis in an attempt to gain the time needed to fix what ailed the ignition system. We just took the green and backed out of the beams and took the car back to the pits.

With the help of Shannon Davis of Davis Technologies we traced the problem to a broken degree ring. (we thought…) When we went to the lanes for the semis we felt we had the issues all sorted but were soon to realize how far from the truth that was. The car did not want to start but Scottie was sharp enough to reach down and plug the magneto into the controller! After a short burnout so as not to mess with Tommy Johanns, the construction barrel orange Camaro was off and gone at the flash of green and gave us a 5.79 winning time slip. But the car still would not run any mile per hour. We figured out that we had some kind of an issue with our ignition timing retarding so we elected to run the final against the Jegs Corvette on the magneto so as to at least be “in the game”. You gotta be in it to win it!

John got out on Troy, but it was not near enough! The engine started mixing up cylinders about 300 feet out and John elected to click it off at about 5.2 seconds knowing of the booming mph the turbo cars ran. He felt it was better to go home with nothing broken–which was the correct thought process!

Our sincere congratulations go out to the Jegs/Proline team on their well-deserved win. We left Vegas with our heads held high! We had been in the final, we had set and then backed up a new WORLD record! We had proven to the whole world that it doesn’t always take mega money (although that does help!!!) to succeed!

We must pass on special thanks to those that helped get us to the Street Car Super Nationals… Steel Dynamics Inc, Pittsboro, In. Dan Myers of San Diego, California for brow beating and abusing me into making the trek across the country. And then helping out with our diesel fuel expenses. Roger Burgess and Kevin Mutters of R2B2 Motors in Duluth, Ga for giving us a fantastic deal on our truck and trailer that allowed us to make the 2500 mile trek across the country easily.

And without all the sponsors, none of this could or would be possible!