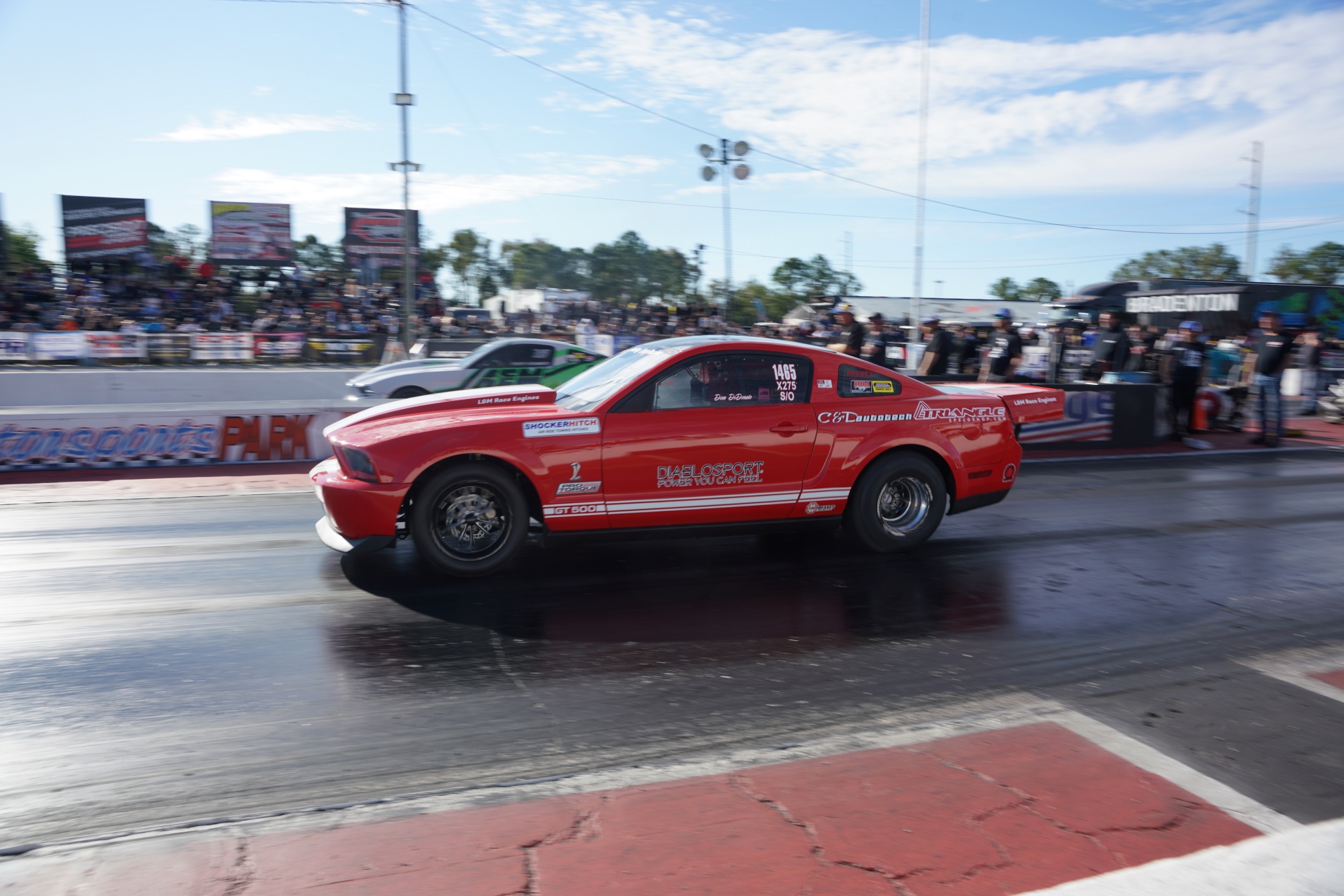 Kicking off the Holley NMRA Ford Nationals season in fine style, the 26th Annual Nitto Tire NMRA Spring Break Shootout roared into Bradenton Motorsports Park, drawing a crowd of fans and a horde of racers. All in attendance enjoyed cool weather, fast race cars and everything an NMRA event has to offer, including a huge car show and a manufacturer’s midway brimming with performance parts. Racers established a foothold in the season’s championship points chase and an elite group headed for the Aerospace Components Winner’s Circle to celebrate the spoils of victory.

Familiar foes paired up in the VP Racing Madditives Street Outlaw final as Dominic DiDonato (pictured above) squared off against reigning champion Vinny Palazzolo. After qualifying second, Palazollo cruised to the finals in his 2009 Mustang thanks to two broke-bye runs and another bye run. Meanwhile, DiDonato slugged his way through the rounds to reach the clash. When the tree came down, Palazzolo smoked the rear tires and DiDonato cruised to the crown with a 5.09 at 132 mph.

With the top 11 cars qualifying in the 4-second range, Edelbrock Renegade looked to be a tightly contested affair, and it was. However, when Jason Spina’s 1990 Mustang met up with Joel Greathouse’s 1993 Mustang in the final round, a 4-second pass would not take the win. Instead, both racers ran off-pace, but Spina did just enough in his 427ci Fox to win (5.76 vs. 5.97).

It’s not always the quickest qualifier that triumphs, but in JDM Engineering Limited Street, top qualifier Jason Davis made it to the final in his 2015 Mustang. There, he clashed with number-six qualifier Bill Putnam’s 1994 Mustang. Davis left first, but Putnam was able to reel him in, as he faltered, and take the win with an 8.71 at 159.23

G-Force Racing Transmissions CoyoteStock generated a lot of buzz at the season opener thanks to the efforts of one Frank Paultanis. With favorable conditions and a combination refined in the offseason, Paultanis etched his name in the history books by running the first 9-second pass in class history. He topped qualifying with a blistering 9.92 at 136 rip and powered his way to the finals. There, he squared off against number-two qualifier Kevin McMullen’s 1994 Mustang Cobra. Though McMullen left first, Paultanis had the steam to take the win (10.09 vs. 10.16).

It was a storybook weekend for Richmond Gear Factory Stock racer Mike Bowen. He topped the charts with his 1971 Maverick in qualifying thanks to 10.08 at 132.91 run. In eliminations, he took out Gary Windsor en route to a final-round clash with Shane Stymiest. When the tree dropped, Stymiest lit the red bulb and handed the win to Bowen, who still muscled to a 10.19 at 130.66 with sealed Ford Performance Coyote 5.0 power under the hood to earn a trip to the Aerospace Components Winner’s Circle.

A healthy field of 25 racers entered Exedy Racing Clutch Modular Muscle competition at Bradenton Motorsports Park. In the end, it was two class regulars that persevered to meet in the fifth and final round. It was an easy win for the number-two qualifier, Jason Henson, as Shane Williams left too soon and lit the red bulb.

In ARP Open Comp action, two classics squared off for the prize, the 1966 Falcon driven by William Jones and the 1966 Mustang piloted by Woody Pack. Pack got the jump, but Jones ran closest to the number for the win.

As the class name would suggest, a Ford truck clashed with an SVT Lightning to decide the winner of Detroit Locker Truck & Lightning. Ironically the truck struck first at the tree, as Bob Dill’s 2001 F-150 got the big jump and ran the number to take out Johnny Lightning en route to the Aerospace Components Winner’s Circle.

A huge field of modern Mustangs filled the ranks of ROUSH Performance Super Stang at the season opener, but in the end, it came down to an S197 against an S550. The more experience chassis notched the win as Larry Firestone’s 2008 Mustang burnout machine chopped down the tree and defeated Kevin McKenna’s 2014 Mustang.

After qualifying fifth in Fastest Street Car Ford Muscle with his 1970 Mustang Mach 1, David Mormann used quick reaction times and consistent passes to make it to the final round. There, he used the same consistency to run quicker on the tree and closer to his dial-in to defeat Mike Moister in his 2014 Mustang GT.

A massive field of 117 Blue Oval rides battled it out in a quest for street car supremacy in QA1 True Street at Bradenton Motorsports Park. After a 30-mile cruise and three back-to-back passes, the honor of baddest of the bad went to Mike Jovanis’ fearsome Fox, which ran the only 7-second average in the class at 7.83. Donato Sierchiorunner-upped with an 8.08 average. Other winners included Edgar Negron (9-second), Adrian Gomez (10-second), Andrew Kelly (11-second), Joseph Carter (12-second), Yoandy Gonzalez (13-second), Chrystal Hunt (14-second), and Bryan Grammond (15-second).

To earn a slot in the storied JLT Performance Spring Break Shootout, racers must compete and run well in QA1 True Street. The 16 competitors with the quickest three-pass averages are selected to race heads-up ona sportsman ladder on Sunday. It was a repeat performance of the battle for New Jersey from Saturday’s Bradenton Motorsports Park Street Car Shootout as Donato Sierchio’s twin-turbo Fox prevailed over Mike Jovanis’ single-turbo Fox thanks to a 7.46 at 175 rip in the finals.

The eight quickest machines from QA1 True Street competition on Saturday receive special shootout plaques and earned the right to square off in the TREMEC Stick Shift Shootout on Sunday. In the end, Rafael Gonzalez rowed the gears in his 2007 Shelby GT500 to victory over James Burch and his 2019 Mustang. As the victor, Gonzalez drove away with a McLeod Racing RXT Twin-Disc clutch with flywheel, while Burch earned a $500 McLeod Racing product certificate.

With a pit of venomous factory machines competing to be king snake, it was Steve Trombley of Temperance, Michigan, who took the Watson Racing Cobra Jet Showdown crown at Bradenton Motorsports Park. After qualifying in the fourth spot, Trombley had his 2013 Cobra Jet running consistently close to its 8.82 dial-in. In the final round, he faced off against David Swanson’s 2019 Cobra Jet and took a trip to the Aerospace Components Winner’s Circle on the merits of his reaction time.

Ford Performance’s halo machines take their sibling rivalry to the Mickey Thompson Cobra/Terminator vs. GT500 Shootout where Dwayne Hickman went door-to-door with competitors in his turbocharged 2010 GT500 to earn bragging rights for the Shelby squad. He qualified in the top spot with a 7.44 at 155 mph. In eliminations, he clicked off a string of 8-second passes culminating in a victory over fellow Shelby driver Jason Wagoner, who lit the red bulb in the final.

Turbochargers can push a car to incredible performances and look no further than the Hellion Turbo Battle for proof. Class regular Justin Jordan ripped off a qualifying pass that was just shy in the 6-second/200-mph zone at 7.03 at 198.09 mph. Obviously the man to beat, he cruised through the competition in his 2014 Mustangwith a string of passes in the 7.30 range. In the finals, Bruce Watling could only watch as Jordan rocketed to a 7.37 at 191.57 to take the win.

The Innovative Racecraft and Li Tuning and Racing Florida N/T Shootout went off without a hitch on Saturday night, and after the eliminations finished, David Wayne Green and his nitrous-assisted, classic Mustang won over Raul Torres and his China WhiTTe twin-turbo Mustang.

Along with the after hours N/T Shootout, the NMRA Spring Break Shootout also hosted the Bradenton Motorsports Park Street Car Shootout.  In the final round of competition, and a New Jersey vs. New Jersey battle for the Garden State, it was Donato Sierchio and his twin-turbo, Fox Mustang who was victorious over QA1 True Street winner Mike Jovanis and his single-turbo Fox Mustang.

Gage Burch of Palmetto, Florida, is a bracket-racing fiend and decimated the Bracket Open class on Saturday. Burch became the reigning pro and sportsman track champion at this track, and last year won the $525,000 SFG race. He piloted his 1990 Mustang powered by a 364ci small-block Ford. On Sunday in Bracket Open, Burch nailed his dial-in for five rounds to take home the win. In the finals, he chopped down the tree and clicked off a 6.23 on a 6.20 dial-in for the win over Russell Satterfield.

Congratulations to all of our event winners who opened the NMRA season with a trip to the Aerospace Components Winner’s Circle. We appreciate the support of all the racers and fans who came to the season opener or followed the action online courtesy of the SpeedVideo.com livestream. We’ll be back to racing in just a few short weeks when we head to the NMRA/NMCA All-Star Nationals at Atlanta Dragway in Commerce, Georgia.