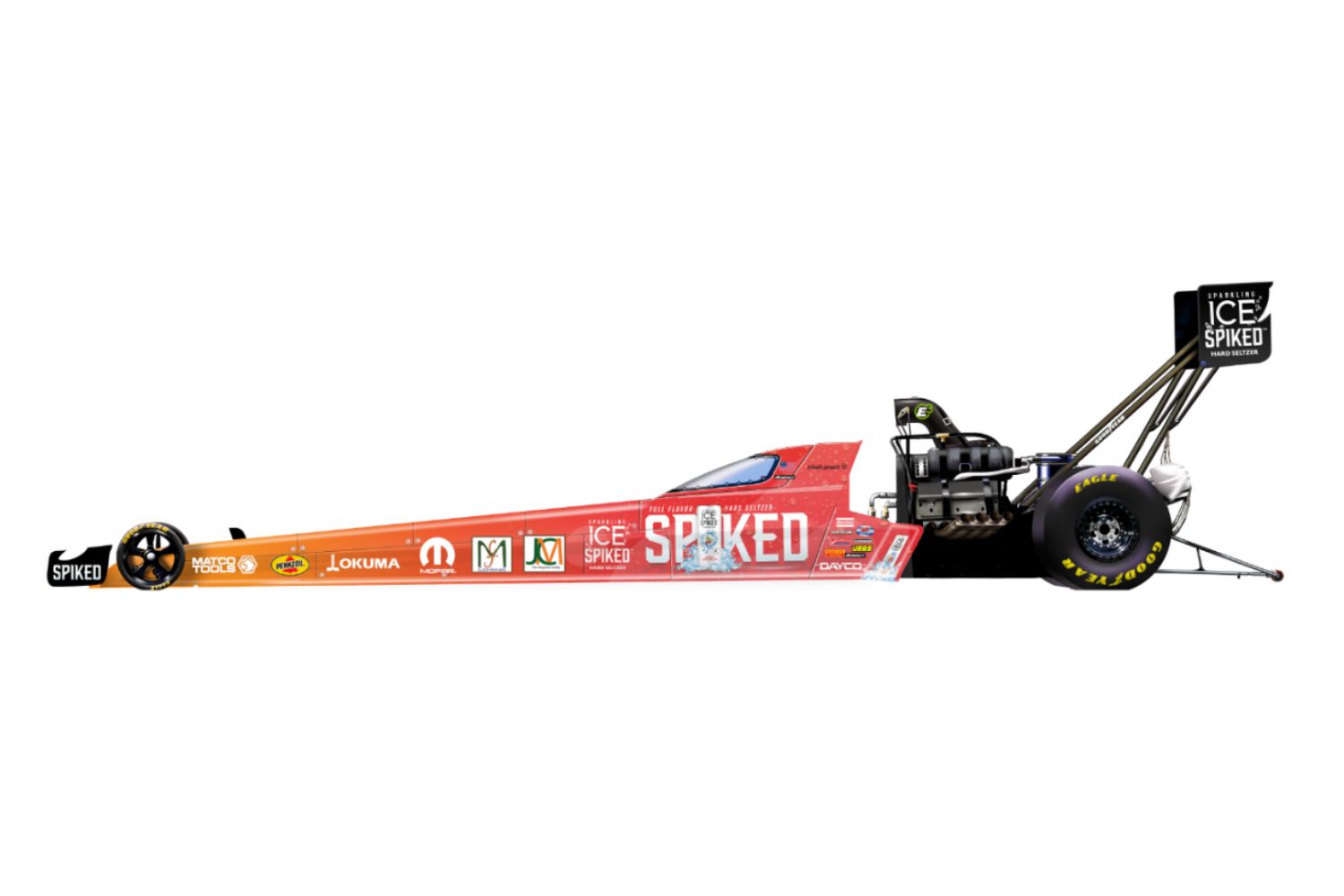 Leah Pruett and Don Schumacher Racing are pleased to announce the Sparkling Ice® brand has expanded its ongoing relationship with Pruett and drag racing’s winningest organization to include the primary sponsorship of Pruett’s Top Fuel dragster at two events during the 2021 NHRA Camping World Drag Racing Series season.

Sparkling Ice Spiked® hard seltzer branding will prominently flank the sides of Pruett’s 11,000-horsepower machine at the rescheduled NHRA Winternationals (Pomona 1), the final leg of the three-race Western Swing, and the NHRA Thunder Valley Nationals in Bristol, Tenn., the fifth of seven Countdown to the Championship events.

Sparkling Ice Spiked is a full-flavored hard seltzer made with 4% alcohol, zero sugar, 1g carbs, and is gluten-free and only 80 calories. The brand launched in November 2020 and part of the launch has included a marketing campaign which featured Pruett as a brand ambassador. Pruett, who has enjoyed the Sparkling Ice brand’s support since 2015, was selected to be the first Sparkling Ice Spiked representative, and the 2021 Top Fuel championship-contender couldn’t be more thrilled.

“I’ve been enjoying Sparkling Ice flavors and newly released products for six years, but the Spiked products have created a new level of interaction for me with friends and fans,” said Pruett. “The work hard, play hard motto is one we live by, so after a long day at the track, grabbing a Spiked with my crew guys brings us closer together when we talk about the highlights day.”

Not only is Pruett, a native of Redlands in Southern California, eager to have two shots at delivering a Wally trophy for her longtime supporter, but she is delighted that Sparkling Ice Spiked has chosen her hometown track and prestigious Bristol Dragway, which will host a Countdown event for the first time, as the two venues to showcase its new hard seltzer.

“There’s no place like home, and there’s no taste like Sparkling Ice Spiked. The Pomona 1 race is always a favorite because I get to see and spend time with people that I’ve known for so many years,” said Pruett of flying the Sparkling Ice Spiked banner this weekend at Auto Club Raceway in Pomona, Calif.

“Friends, family, and former racing buddies from over the years, from my high school crew to college professors, Pomona 1 is an actual mile marker for me, and because Sparkling Ice has been such a milestone partner in my life, I love introducing the newest and next beverages on my dragster at my home track.

“Unconventional might be a great way to describe our Bristol event in the fall, as it’s occurring at a time of year we have never raced there, and on top of that, it’s now a highly-important Countdown race,” added the Top 10 ranked driver who is aiming to be in the thick of the championship hunt when the Sparkling Ice Spiked car returns at Bristol Dragway. “It will have been over two years that we’ve seen those fans, and we would love nothing more than to cheers with them in the winner’s circle and continue our fight in the 2021 championship.”

In addition to logo placement on Pruett’s 334.15-mph rail, Sparkling Ice Spiked branding can also be seen on Pruett’s firesuit, the team’s crew shirts, and on the team race and support haulers. DSR’s 21-and-older VIP hospitality guests will be treated to a sampling of Sparkling Ice Spiked’s products at the Pomona 1 and Bristol events, while Sparkling Ice’s non-alcoholic beverages are available to DSR guests of all ages at all 2021 Camping World Series events.