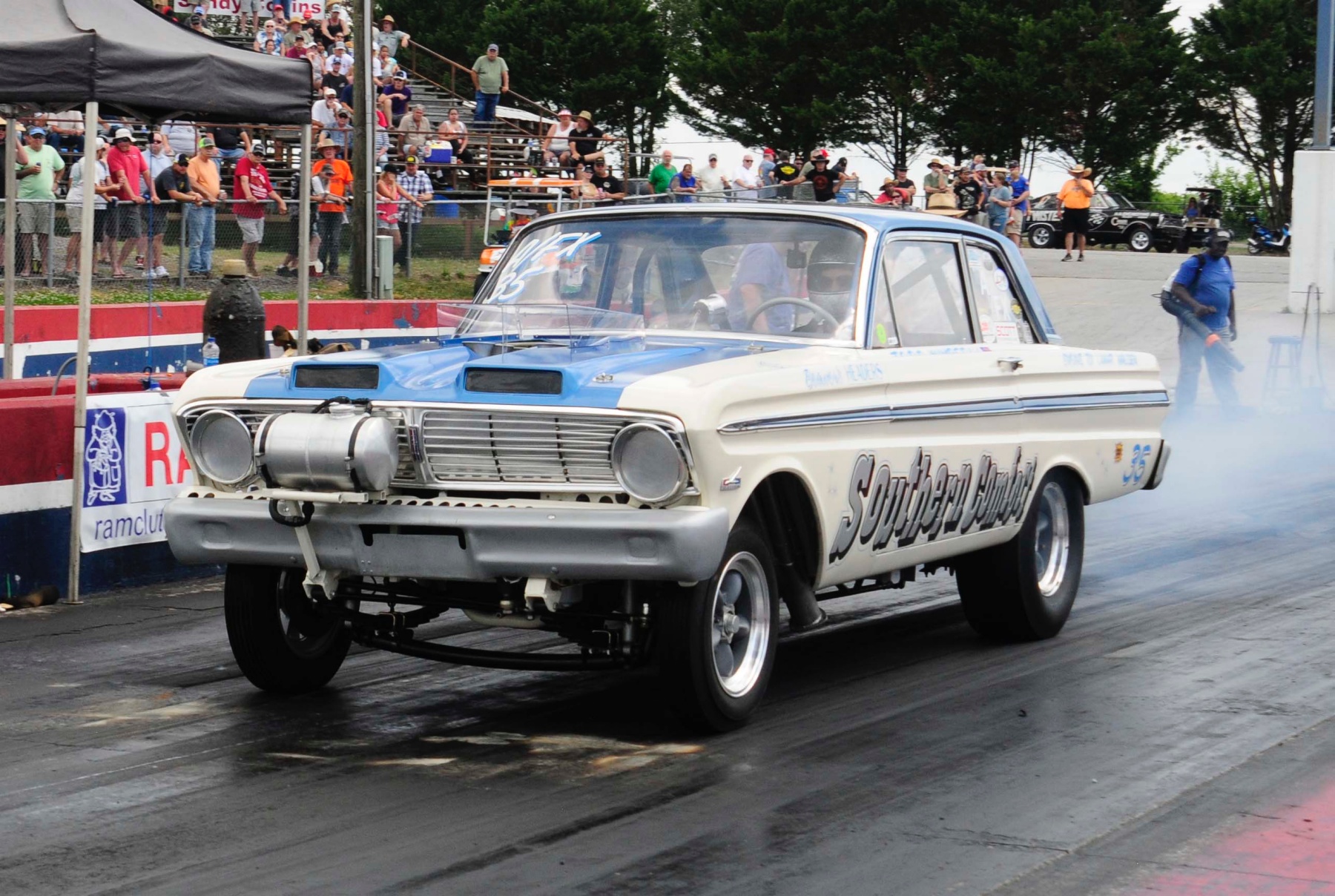 When SEGA founder Quain Stott began his description of what was about to happen during their recent event at historic Farmington Dragway, you couldn’t help but think you had been transported all the way back to 1967. As the Pro Mod pioneer talked, dressed in period-correct white pants and shirt, it was evident that much thought and preparation had been put into the race that included three gas classes, one Super Stock class, and the F/X cars that would be run under 1967 rules.

With the main rule being that each car must include a clutch pedal and that the driver would change gears, a real treat was in store for the very nice crowd on this hot humid day in June.  Quain explained that the cars would run under a weight-per-cubic-inch rule and that a group of approximately 80 cars in total would provide them with a true history of our sport, and that the day would be completed at an early hour of the evening.

So it was no surprise that there was a tech rep from GForce transmissions, formerly TEX Racing, to provide help with their 4-speed transmissions – no exceptions. Also, there was a very evident engine preference of mostly small-block Chevrolets, with the occasional big block sprinkled into the mix. 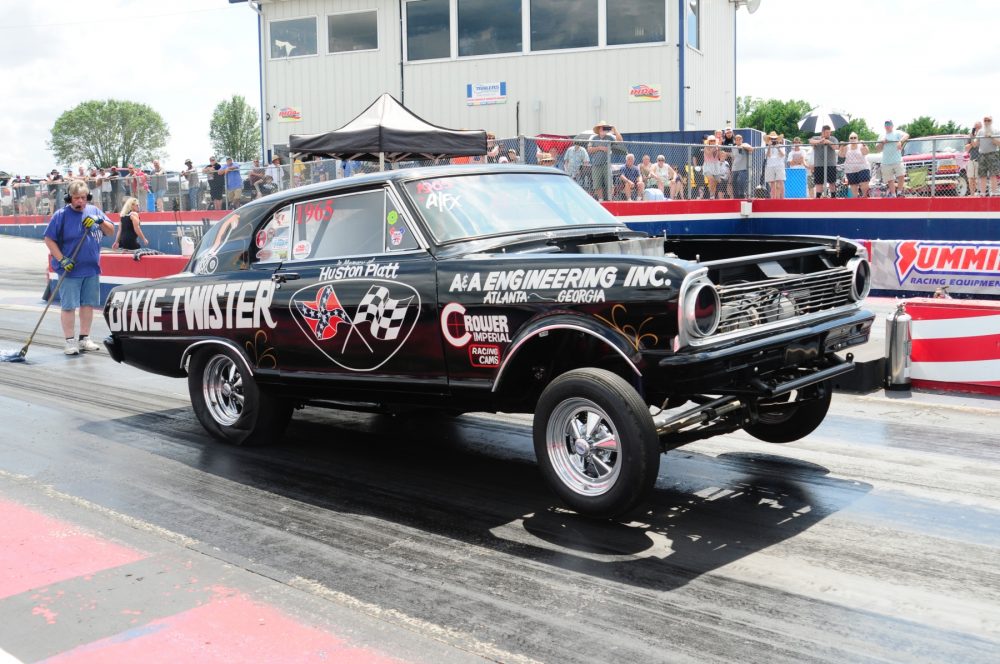 But make no mistake, the two most recognized names that produce these were Gene Fulton and Lamar Walden, Jr. and III, son and grandson of the late Lamar Walden. The father and son duo would compete in A/Gas and B/Gas, respectively, both with engines based on the W block, or 409 for rookies, with Fords and Chryslers sprinkled into the mix.

Super/Stock consisted of 12 cars, all running a spec 9-inch tire, and resulting in the third round giving a bye to Mark Hackett in the “Mercury Poison” Comet. He would face the winner of Ron Allison in the “Poppy’s Toy” Nova versus local favorite Steve McCreary in the “War Wagon” Chevelle. The result was Allison facing Hackett, with the red and white Nova winning.

The C/Gas class had 16 cars resulting in a 4-car semifinal shootout that included Larry Floyd’s “Stud Muffin” Chevy II wagon versus Billy Wilson in the “Trouble Maker.” The other twosome included Tim Hall’s “Scalded Dog” AMC against Quain Stott’s “Flower Power” ’56 Chevy. The final resulted in Floyd driving the Chevy II wagon to a victory over Hall’s AMC. Also, there was a match race, with Stott victorious over last year’s champ, George Miller, in the “Falcon Crazy” ’63 Falcon. 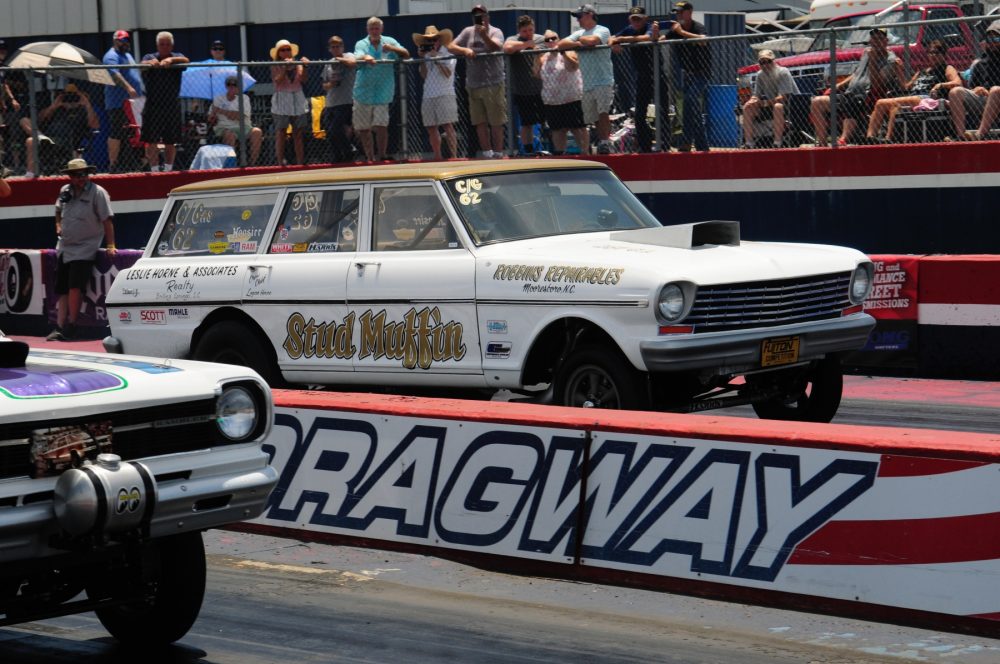 The B/Gas class consisted of 17 cars with three cars in the semifinals, giving the bye to Todd Oden in the “Double Down” ’57 Wagon to face the winner of Ken Rainwater’s “Renegade” ’67 Nova over Jerry Bird’s “Freebird.” The race win went to Todd Oden’s wagon.

Likewise, the A/Gas class had 17 cars, with the final three being Leslie Horne’s “Chick Magnet” getting the bye to face the winner of a match between Kenneth Phillips’ “Silver Streak” Corvette over the ’32 Victoria of Gabriel Burrell called “Southern Flyer.” The result was the beautiful silver Corvette the winner.

Another notable item was that all the cars were hand lettered with the result of many very creative names for great cars with straight axles, 4-speeds and great competition. If this group comes to your area, make a trip to your favorite local track and visit. You won’t be disappointed.