Smith a former three-time IHRA Alky Funny Car champion and the 2010 NHRA Pro Mod champ, admitted that he was “starting to wonder if it was ever going to happen over here,” after starting his Al-Anabi Racing ’69 Camaro from the sixth qualifying slot and taking out Gene Hector, defending class champ Mick Snyder and teammate Alex Hossler with a holeshot in the semis.

“We were fortunate that Von cut a light on Alex because it spun the tires pretty hard,” crew chief Howard Moon said. “I’m very glad that we had lane choice for the final so we could go back to the other side (right lane).” 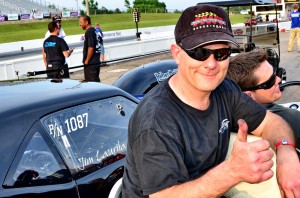 “I obviously have to thank Howard and all my guys for getting me here, but also (team owner) Sheikh Khalid for sticking with us,” Smith added. “He calls me in the mornings, usually wakes me up, and he’s never wavered in his support, always saying we could do it and that’s meant an awful lot to me.”

For Laurita, it was the second Pro Nitrous win of his career after he initially scored in 2010 at Norwalk, OH. In Virginia, he qualified number one with an impressive 3.771 pass at 198.90 mph, then beat Robert Patrick, Randy Weatherford and Al-Anabi’s Steve Jackson to reach Matt Suite in the final.

It was all over at the start as Suite was late off the tree with a .119 reaction time in Steve Vick’s ’68 Camaro, while Laurita and his Switzer Dynamics-backed ’68 Camaro left with an excellent .018 light that led to a 3.822 run at 198.09 mph, his best of eliminations. 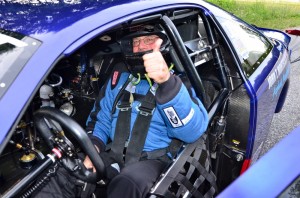 “You know, when we won that race in Norwalk I would never have thought it would take nearly three years before we were back here,” Laurita said. “Hopefully, it won’t take that long to do it again.”

After qualifying seventh, Montecalvo marched through fellow New Yorker John Pluchino, Kevin Bealko and Elijah Morton before beating Lester Cooper in the final round with a 4.157-seconds pass at 174.91 mph in his ’08 Cobalt. In victory lane, Montecalvo dedicated the win to the memory of his friend and competitor, Bert Jackson, who died in 2001 after on-track XPS accident at Rockingham Dragway.

“I know Bert is riding with us on every pass—not only when we win—and I just want to honor his memory whenever we’re out here racing hard like he always did,” Montecalvo said. “We really miss him being here a lot.”

Qualifying didn’t go as well as “Stevie Fast” Jackson might have liked, as he slotted into the 12th starting position for the first-ever, 16-car Pro Drag Radial field, but once eliminations began his Procharger-equipped, Al-Anabi Racing ’93 Mustang got the job done.

Jackson handily defeated Keith Berry in round one, then survived a pedaling contest to regain grip against Steve Woolley in round two. In the semis he overcame a holeshot thanks to a loss of traction by Kenny Hubbard, then outran Mark Micke with a 4.526 pass at 178.26 in the final round.

“Those other guys might win some down the road, but there can only be one first winner in the books and we got it done! “ Jackson excitedly pointed out even before exiting his car at the top end of the track. That he got it done in the car that he basically made a name for himself in before it was sold last year to Al-Anabi Racing team owner Sheikh Khalid Al-Thani of Qatar made the win all that more special to Jackson. 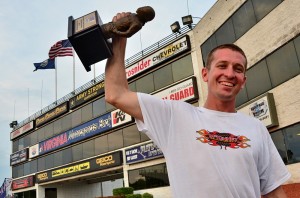 “I feel very blessed. When Sheikh Khalid called me and said he wanted to send the orange Mustang back over here for me to run it in the Pro Drag Radial deal I couldn’t believe it,” Jackson said. “I thought when I left Qatar (early this year) that I wouldn’t even see it again until next season, but dang, when I saw it sitting there on the shipping dock it was like seeing a child being reborn or something, if you can imagine that. I mean, that’s my baby!”

Even top qualifier McKinney said he’s surprised “something stupid” hasn’t yet happened to interrupt his current Pro Extreme Motorcycle (PXM) winning streak. He even pointed out that crew chief and past PXM champ Ashley Owens—whom he raced aboard a second McKinney Motorsports bike in the U.S. Drags final—found a bolt that was loose and likely to fall out and ruin his day, right before McKinney took on David Vantine in the semis.

“Yeah, there’s so much that can go wrong, as well as so much that has to go right in order to win one of these things, that it really is amazing we keep on winning,” said McKinney, who ran 4.050 at 175.66 in the final while Owens faltered at the start with electrical problems. “I just want to ride it out as long as possible because as everyone knows, nothing lasts forever.”

Florida orange grove owner Keen qualified his nitrous-boosted ’63 Corvette second, just one-thousandth of a second behind Travis Harvey for the eight-car Pro Mod field. He first made it past Todd Howard in eliminations and bettered a tire-smoking Tim Savell in the semis to meet up with Harvey in the final round. 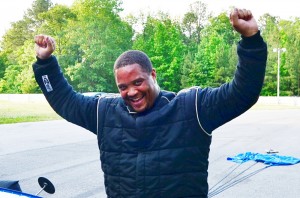 “I never did see him, so I knew that was a good thing,” Keen said following his career-first ADRL win. “It was a good day.”

After qualifying eighth for the 16-car field Brown also recorded his second ADRL win in his ’03 Grand Am by beating Aaron Glaser and his ’69 Camaro in the Top Sportsman final, while Howard lasted from the 11th starting slot to beat Alan O’Brien for the Top Dragster title.

The ADRL returns to action June 29-30, with its Summer Drags IX at U.S. 131 Motorsports Park in Martin, MI.