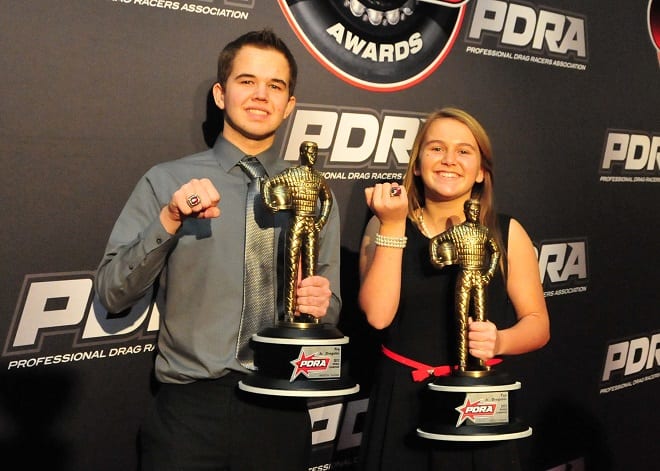 People often say drag racing is in the blood. Perhaps it’s also in the genes. Racing – and winning – would appear to be a part of the Tanner family genetic makeup. Siblings Preston and Alexis ‘Lexi’ Tanner have been bringing home Junior Dragster trophies since they began competing in the ranks. And while no one was surprised to see them in the hunt for the Pro and Top Junior Dragster PDRA Championships this season, no one expected them to pull off the feat they did.

distance between himself and fellow competitor Tia Tutterow to ensure that she would not catch him with just one race to go. Lexi took over the points lead of Huddleston Performance Top Junior Dragster by winning Dragstock XII, but was less than two rounds ahead of Mia Schultz, not enough breathing room to celebrate a Championship yet.

Heading into the PDRA Finals, Preston told his parents to focus on Lexi. With his championship in the bag, he wanted his little sister to have the best possible chance at winning her championship as well. The strategy seemed to be working as Lexi started going rounds. “Everything just fell into place,” Preston remembered. “We came into the weekend really focusing on my sister since I had already sewn up my championship and hers was still on the line. But then I started going rounds, too.”

Incredibly, both Preston and Lexi won their classes at the PDRA Finals, solidly staking claims to the Pro and Top Junior Dragster World Championships. “For both of us to win the event and the World Championships was unbelievable,” Lexi expressed. “It was like the coolest thing ever.”

“It was a life changing experience,” agreed Preston.

As if further celebration was needed, Lexi turned 13 during the Finals. A better birthday present could not have been purchased for any amount of money. Being crowned World Champion at just 13 and 15 years of age, the future is bright for the Tanner siblings, who know the reward of hard work and dedication. Besides devoting time and energy to racing, they must also keep up their grades in school in order to be allowed to race. They’ll need those good grades to pursue their careers as well. Preston plans on becoming an orthodontist, Lexi an attorney. As if school work and racing weren’t enough, Preston and Lexi both compete in cross country and swimming with their schools. “We’re a lot better at racing,” Lexi admits with a smile.

Although the Tanners aren’t immune to sibling rivalry, they set that aside for racing.

“The goal is to always race as teammates, as a family,” Preston told. “When we’re on the way to the race track we don’t really talk to each other, but once we get to the race track, we bond so that we can have a positive outcome. When one of us goes up the line, you just hope they beat the other person because it’s almost like you’re up there. This experience definitely brought us closer together.”

“I want to thank my mom, my dad and my brother for being supportive, driving me to the races, and working on my car,” said Lexi. “Also Nick Woods Racing and Hoosier Tires for providing great equipment, the PDRA Series for letting juniors run at the events, and the Traction Twins for giving us such a great track.”

The duo has enjoyed the accolades they’ve received from being among the first, and perhaps the only, siblings to ever win Junior Dragster World Championships in the same year, but have already set their sights on the 2016 season. Both will be debuting new Halfscale dragsters and Lexi hints that her dragster will have a new wrap, this time with a “twist” on the familiar ‘Lightening Lexi’ scheme. Preston turned 16 this January and will have three seasons remaining in PJD before he switches gears to Top Dragster.

Look for Preston to defend his Championship and Lexi to begin her run in Pro Junior Dragster starting with the PDRA Series Opener at Tulsa Raceway Park, March 11-12