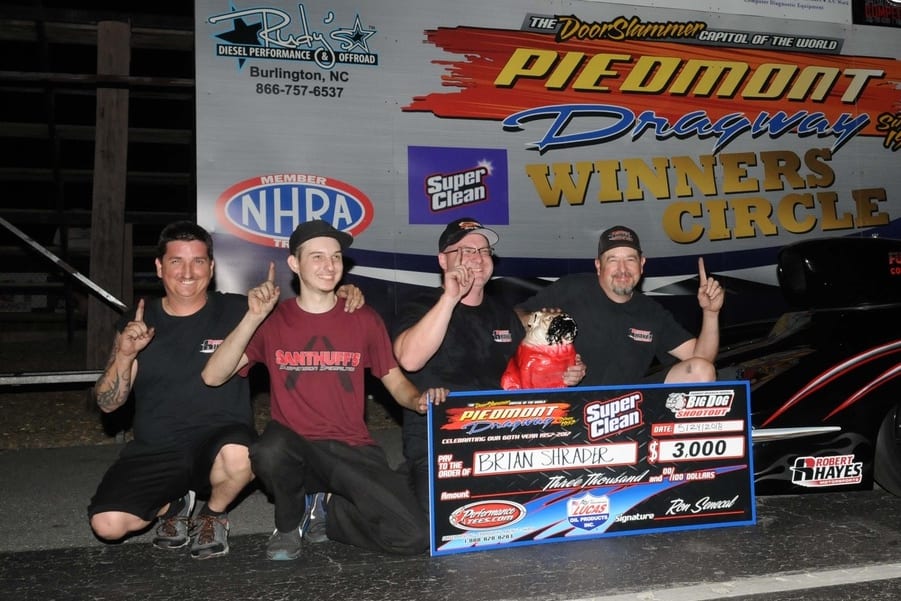 It has been said many times in racing that there is a reason we don’t race on paper. That was never more true than in historic Piedmont Dragway’s “Big Dog Shootout”. After the May event and last year’s season finale race, you could say that points champ Tim Lawrence and rival Brian Shrader were going to make this season a snoozer. But no, nothing here is run on paper. The May event had Shrader as the low qualifier with Bubba Turner in second at a 4.016, only later to run a 3.997 in competition to become the third member of the Big Dog 3-second club.

Now a short historical moment. When the 3-second club was first established several seasons ago, the powerplant in the car that was the first to the 3’s was done by Gene Fulton. Today’s powerplant was also prepared for Brian Shrader by Fulton, only 100 cubic inches less. Try that question out on all your drag racing friends.

The rest of the qualifiers were Jason Harris at 4.039, Brett Nesbitt at 4.056. Fifth was Travis Harvey’s freshly completed, Jack Gaddy-owned, Jeff Miller-tuned “Dream Team” Camaro at 4.120, then Cam Clark at 4.256, Shannon Wilson’s Merc at 4.586 and Tim Lawrence at 8.250 after running off the end of the track when his ‘chutes did not deploy.

The unfortunate moment of round one was that Tim Lawrence could not run due to excessive front-end damage and dirt clods in too many unnecessary places. Bubba Turner, however, gave notice with a 4.014-second blast at 183 mph. 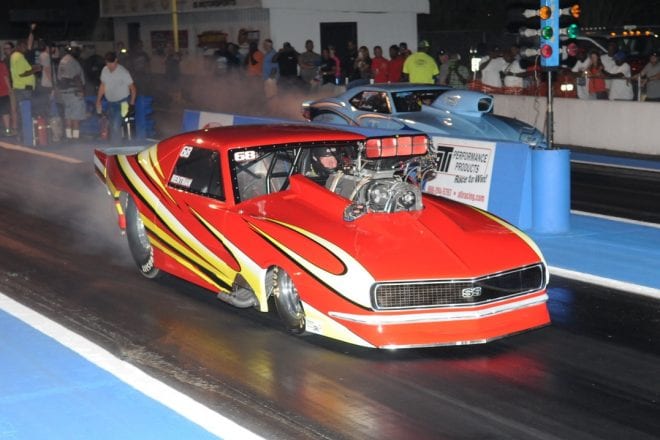 Round two had Turner running a 3.997 and set the top speed with a 183.33 blast. With Shrader running a 3.977 to defeat Brett Nesbitt, the stage was set for an all-3-second final. Only a 10 cent wire upended Turner’s plans and Shrader singled to a 4.007 to take the coveted Big Dog at “The DoorSlammer Capital of the World”.

The Big Dog Shootout is growing each month with new cars coming each month. It should be a great show on June 21. See you there.