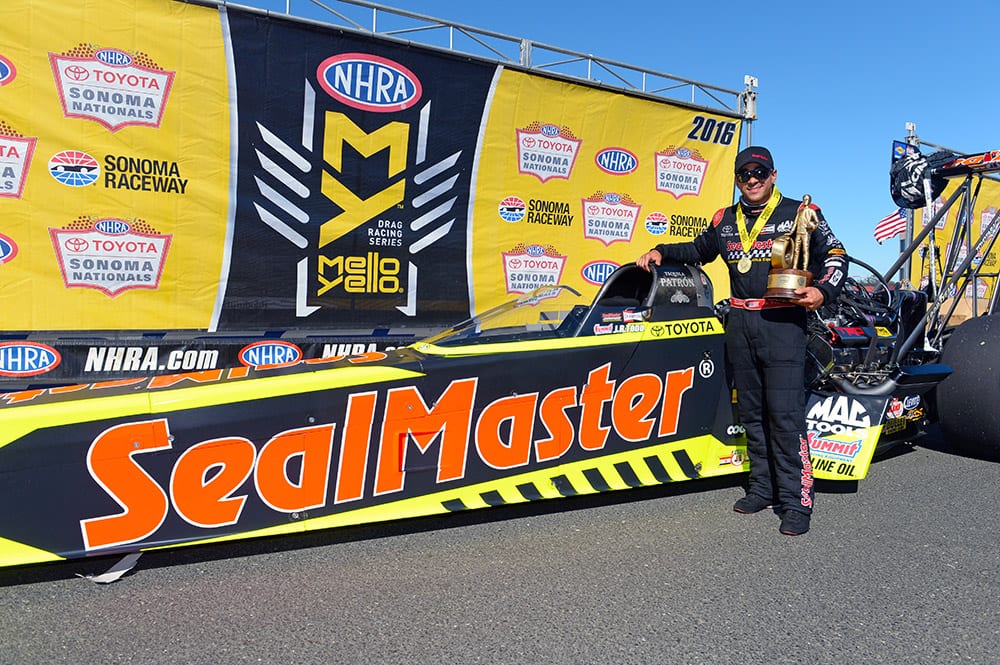 SealMaster, the one-stop source for pavement maintenance products and equipment, and Kalitta Motorsports are pleased to announce a contract extension for the 2017 season. SealMaster will continue as the primary sponsor on J.R. Todd’s Top Fuel dragster for the entire 2017 24-race NHRA Mello Yello Drag Racing Season schedule. SealMaster will also be an associate backer on the Top Fuel dragsters driven by Doug Kalitta and Troy Coughlin, Jr. and the Toyota Camry Funny Cars of Alexis DeJoria and Del Worsham.

“It is always exciting to announce a sponsorship renewal, especially with SealMaster. They are truly some of the greatest people to work with,” said Todd. “It has been an awesome season representing all of the incredible SealMaster franchisees and I am thrilled to be able to do the same for the entire 2017 season as well. I have been welcomed into the SealMaster family and they always come out in huge groups to support us on track as well. We did a lot of good this season, but I am ready to see what 2017 will offer in this SealMaster Toyota Top Fuel dragster.”

SealMaster franchisees manufacture pavement sealer and distribute a full line of pavement maintenance products and equipment throughout the United States, including Puerto Rico. Franchisees serve contractors, public and private road maintenance departments, property managers and others charged with pavement maintenance and preservation. They first signed with Kalitta Motorsports in the 2014 season as an associate sponsor on the Top Fuel dragsters driven by Kalitta and Todd. Last season, they expanded that relationship to the primary level for two races with Todd before becoming his title sponsor for the entire 2016 season.

“It’s been a great three seasons with Kalitta Motorsports and we’re looking forward to another in 2017,” says SealMaster Franchise Director Rick Simon. “Our brand is aligned with a talented driver on a highly regarded team, which brings significant visibility to SealMaster. The team is wonderful to work with and very conscientious about delivering value to us as a partner.”

Todd has taken the fan-favorite SealMaster scheme to his career-best season, with a new high in round wins and matching his rookie year total of four final round appearances. He gave SealMaster their first win as a primary sponsor with a victory at the Toyota Sonoma Nationals in July. Todd clinched his third consecutive Countdown for the Championship appearance with a semi-final effort in Seattle and has ranked among the top eight drivers in the Top Fuel standings after every race this season.

“SealMaster has truly embraced this program and it has been great to see,” said Jim Oberhofer, Vice President of Operations, Kalitta Motorsports. “Each week we welcome franchisees and their guests to the track and to see the joy on their face is awesome. SealMaster has become a big part of the Team Kalitta family and we look forward to this relationship continuing for many years to come.”