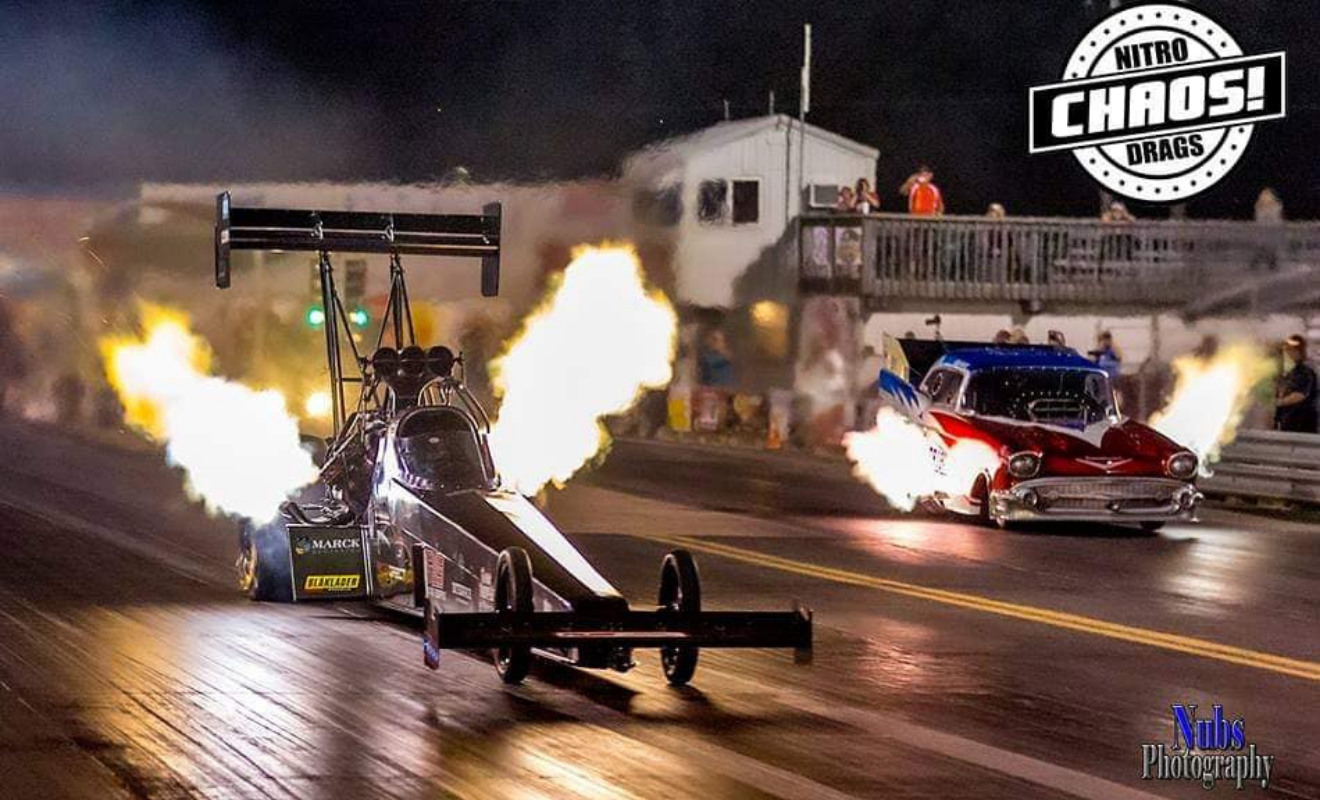 NHRA Top Fuel pilot Scott Palmer is known nation-wide for his dedication to entertaining fans and enjoying himself while competing at the highest levels of drag racing, and his legend only grew this weekend at Eddyville Raceway Park [ERP].

The Southwest Missouri-native clicked off a seemingly effortless 3.21-second, 265 mph lap down ERP’s concrete-and-asphalt eighth-mile in his Top Fuel Dragster to take the No. 1 qualifying spot for the inaugural Nitro Chaos and obliterating the track record by over a tenth-of-a-second and 30 mph.

Interestingly, the top performer and eventual event winner was on the fence about participating in the run-what-ya-brung, nitro-mandatory shootout just a few weeks before the race.

Palmer admitted, “I definitely wanted to be involved because we love to support events like this, but I also didn’t want to be the guy that showed up with a NHRA-level car and looked like he was beating up on these guys. But one after another I kept getting texts and calls from racers planning to attend saying that they wanted us to come. It was awesome. They wanted to make sure they put on as good of a show as possible for the promoters and the track, so races like this keep growing and, hopefully, we end up with more of them.

“So, we made the decision to come, and I told everyone that we’ve talked to that you’re not going to hear me or anyone on our team talking about showing up and crushing everyone or anything like that,” Palmer continued. “That’s not what we’re about, but we are happy to come out here and compete, and put on a show for these fans.”

“Headed into the weekend, we had a lot of people asking us if we thought we’d be able to get down,” Palmer explained. “I was pretty confident we could, but I hadn’t been to Eddyville in probably 20-years, so I wasn’t totally sure. When we got here and saw the surface, I told the guys, ‘Oh, we’re going down alright. We’re gonna be fast, too.’”

He wasn’t wrong, but Palmer was prepared to do whatever it took to make it to the finish line under power.

“We knew there was a lot left in it after that first hit,” he said following the track record-setting, No. 1 qualifying pass. “I had the brake the whole way down through there; I was committed to getting down. A lot of crew chiefs don’t like that because it’s hard to tune that way, but I’ve got so many laps down these little eighth-mile tracks that I know what it takes. As far as I’m concerned, you drag that brake as much as you have to. That’s how you get booked in, that’s how you get promoters ringing your phone. It went 3.21, and that was after an eighth-mile burnout. I think we could go 3.0-something if we really wanted to.”

While Palmer admits he had a performance advantage headed into the weekend, he also made mention of the fact that slowing these cars down is no easy task.

“It’s harder than people think to turn these cars down,” he continued. “You can just as easily knock the tire off the thing by slowing it down as you can when you get too aggressive. It might get out there and shake the tire loose being too slow, not being aggressive enough.”

Turns out not being aggressive enough would hardly be the issue Palmer and crew faced in Eddyville. After the team’s pit mat caught fire during the warmup for the first round of qualifying, which they ultimately missed due to a computer issue, Palmer and company’s battle continued into the elimination rounds. Thankfully, they had a bye in the semifinals when an oil pressure sensor unintentionally shut the car off just 100-feet into the run. 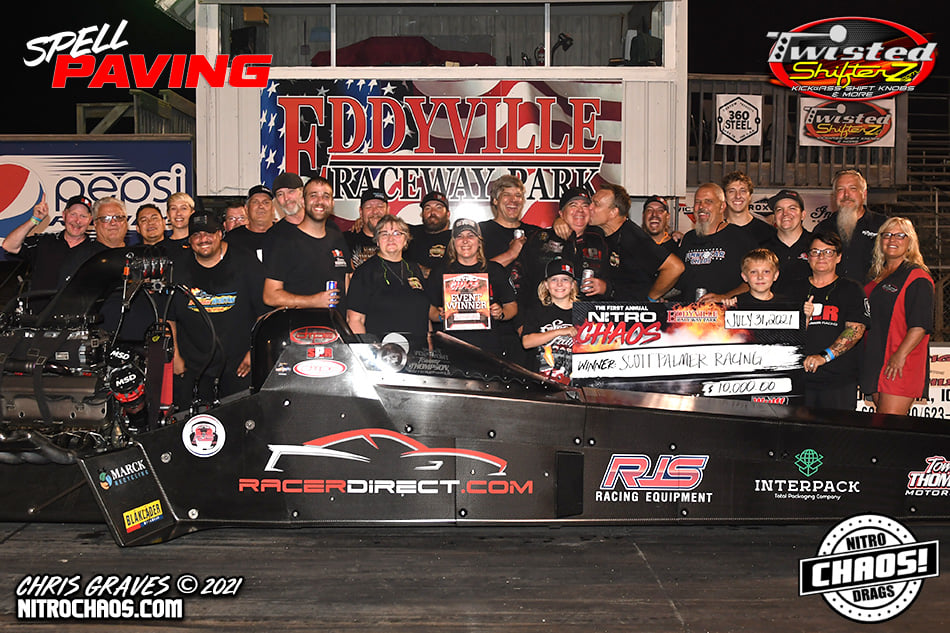 In the final round, Palmer left on “Radar” Lechtenberg in the “Nitro Madness” AA/Fuel Altered and never looked back, posting up an early shut-off 3.27-second, 223 mph blast to easily best his opponent’s 3.90/193 mph effort.

“I believe a big part of our sport’s future is in events like Chris Graves’ Nitro Chaos,” said Palmer, reflecting on the win and the race. “Really am surprised, almost a little disappointed that there weren’t more teams here to support this deal and be a part of it, but we’re happy to have gotten a chance to race and here’s hoping we can do a lot more of this in the future.”