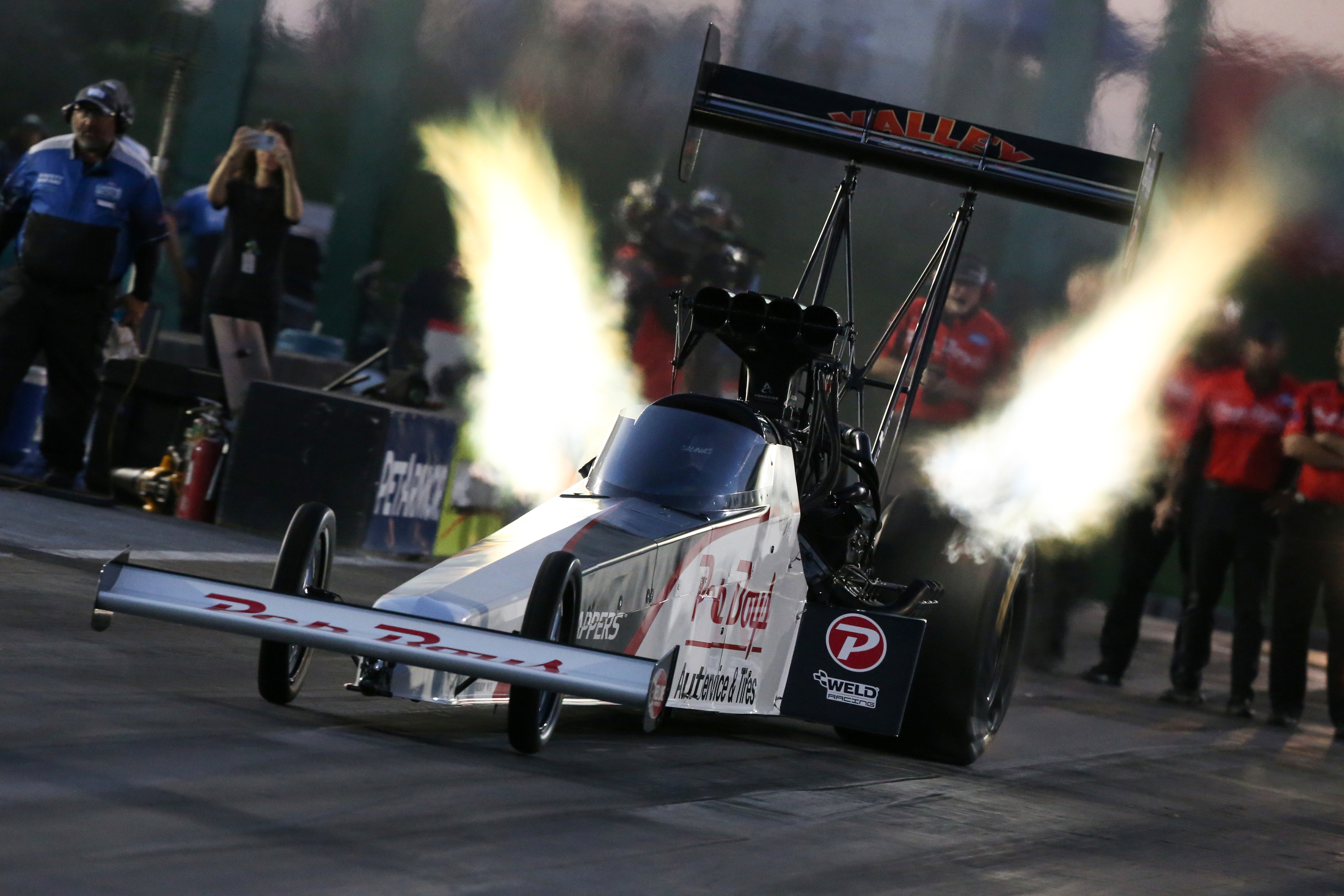 Top Fuel standout Mike Salinas closed out Friday at Heartland Motorsports Park with the top run of the night, racing to the provisional No. 1 spot at the 33rd annual Menards NHRA Nationals presented by PetArmor.

Racing next to points leader Brittany Force on the final run of the evening, it was Salinas who had the top performance of the opening round of qualifying, delivering a strong pass of 3.754-seconds at 323.19 mph in his 11,000-horsepower Pep Boys dragster. If it holds, it would give Salinas, who has four wins this season, his third No. 1 qualifier in 2022 and 11th in his career. Salinas led the points for a two-race stretch earlier this summer before Force jumped back in the lead, and the veteran is trying to close the gap again this weekend in Topeka.

“The way we’re doing this, we’re taking it one round at a time and not getting too far ahead of ourselves,” Salinas said. “There’s a lot of racing ahead of us and a lot of great teams. You can just see the cars getting closer and closer. Tomorrow is going to be awesome. Our cars love the heat and we’re getting ready for Sunday. It’s going to be a dogfight and it’s anybody’s race out there. All the Top Fuel cars are so close here.” 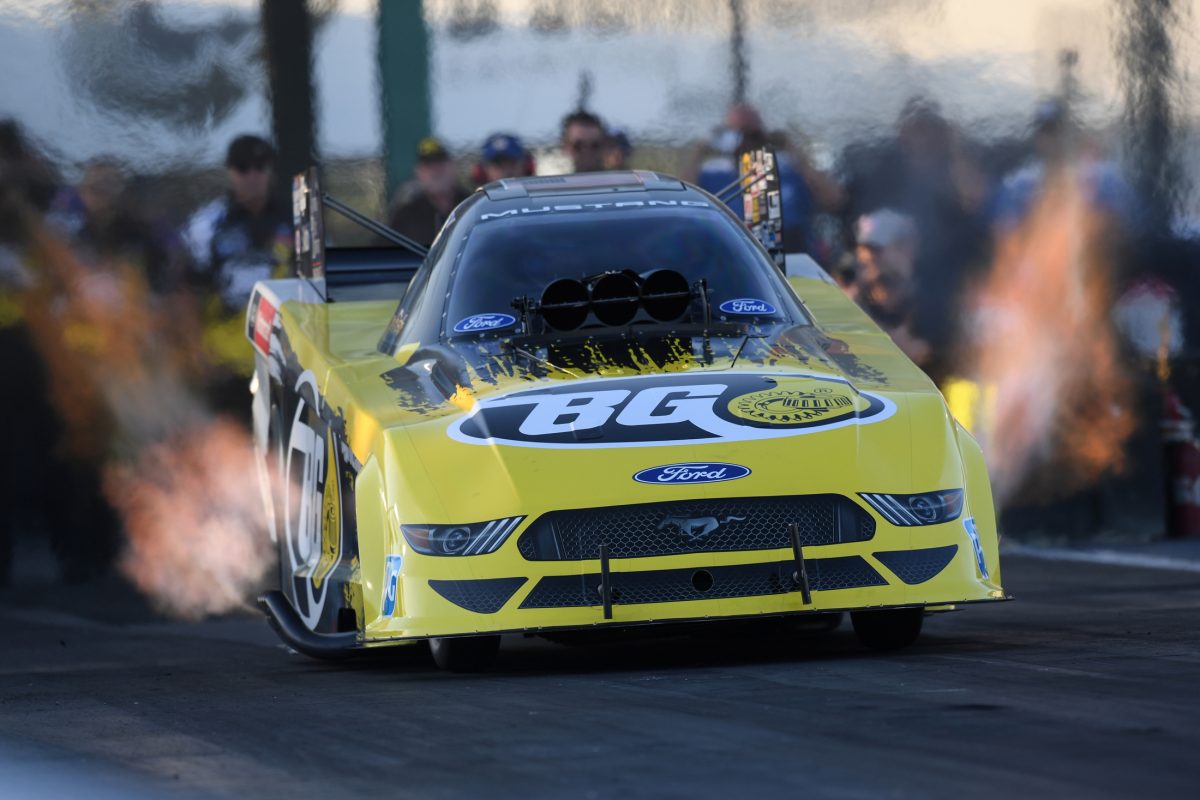 In a thrilling round of Funny Car on Friday, Tasca edged out the John Force Racing tandem of Robert Hight and John Force with an impressive run of 3.930 at 323.81 in his 11,000-horsepower BG Products Ford Mustang to take the provisional No. 1 spot. After advancing to back-to-back final rounds on the Western Swing, winning in Sonoma, Tasca qualified No. 1 in Seattle and will now look for his second straight top spot and the ninth in his career. Tasca’s strengthened his championship resume in recent weeks and started his weekend in Topeka strong as he looks for his first career win at Heartland Motorsports Park.

“It’s nice to start off from the No. 1 position,” Tasca said. “This is big because it’s going to get hot out. Look how competitive the class is. It just shows you how tough it is out here.” 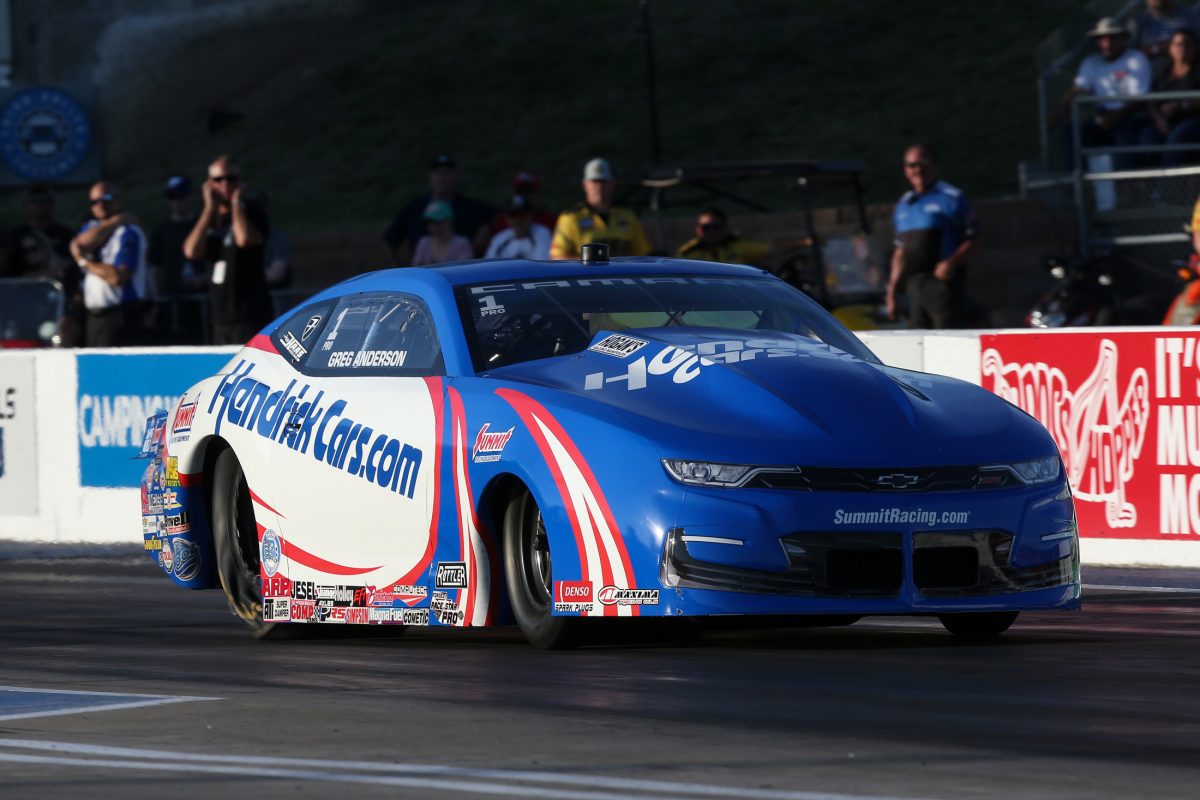 Anderson put himself in position to qualify No. 1 for the second straight race, going right to the top of the Pro Stock field at Topeka’s House of Speed on Friday with a run of 6.623 at 205.44 in his HendrickCars.com Chevrolet Camaro. It would also be the defending world champ’s 120th career top spot, but the veteran is chasing a bigger goal right now and that is his 100th victory. He has run significantly better as of late, qualifying No. 1 in Seattle and advancing to the final round in Sonoma, and the five-time world champ hopes to finish the job this weekend and pick up his first victory of the year.

“I need (a win) bad. It’s been a long year so far and we’ve not performed like we’ve needed to,” Anderson said. “But these last 3 three races, we’ve gained each race and we’re coming along just in time for the playoffs. We’re coming and we’re definitely a threat to win again. That 100th win is still around the corner and I’m confident we’re going to get it. We’re just going to keep doing what we’ve been doing and we’re knocking on the door.”

Troy Coughlin Jr., who picked up his first career Pro Stock win at the most recent race in Seattle, sits second with his 6.632 at 208.04, while teammate and points leader Erica Enders is right behind with an identical 6.632 at a slightly slower 207.62. 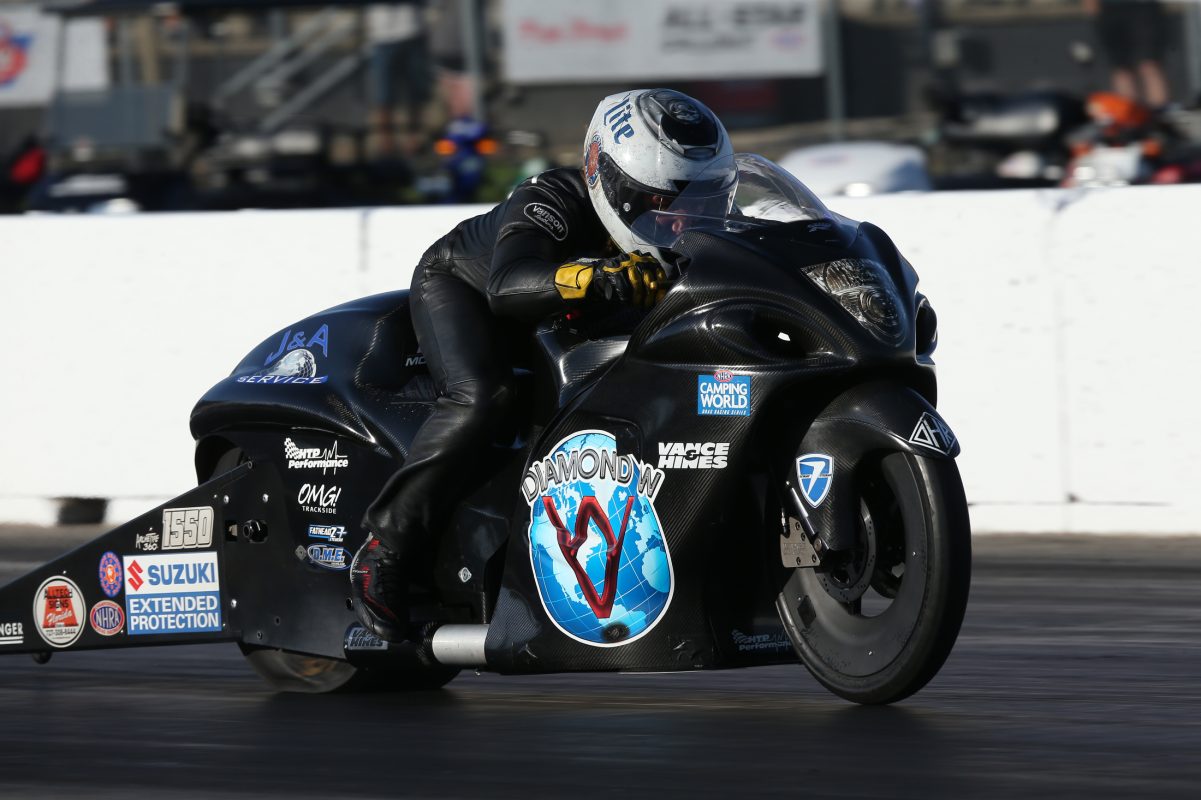 A race after picking up his first career Pro Stock Motorcycle win, Gladstone is now on track to pick up his first career No. 1 qualifier in the class thanks to a stellar run of 6.831 at 195.08 on his J&A Service Suzuki Hayabusa. That run gave Gladstone a significant advantage over the rest of the field, including points leader Angelle Sampey, who went 6.882 at 195.14 in the pairing with Gladstone. Beyond that, no other rider reached the 6.80s, as Gladstone put on an impressive show on Friday. It is his first appearance at Heartland Motorsports Park in Pro Stock Motorcycle – and the first for the class since 1997 – and Gladstone showed no let-up following his Sonoma win.

“The run felt really good, and this is a new track for most people in the class,” Gladstone said. “I didn’t really know what to expect, but it was good down low to put a (good) number down. We made a call as a team and it worked out, and that feels pretty good. (The win) proved to me that I could do it, but now it gives you some nerves being up high in the points. This whole facility is so cool and it’s awesome. It’s a unique place and I really like it so far.”

Qualifying continues at 2:00 p.m. CT on Saturday at the Menards NHRA Nationals presented by PetArmor at Heartland Motorsports Park.