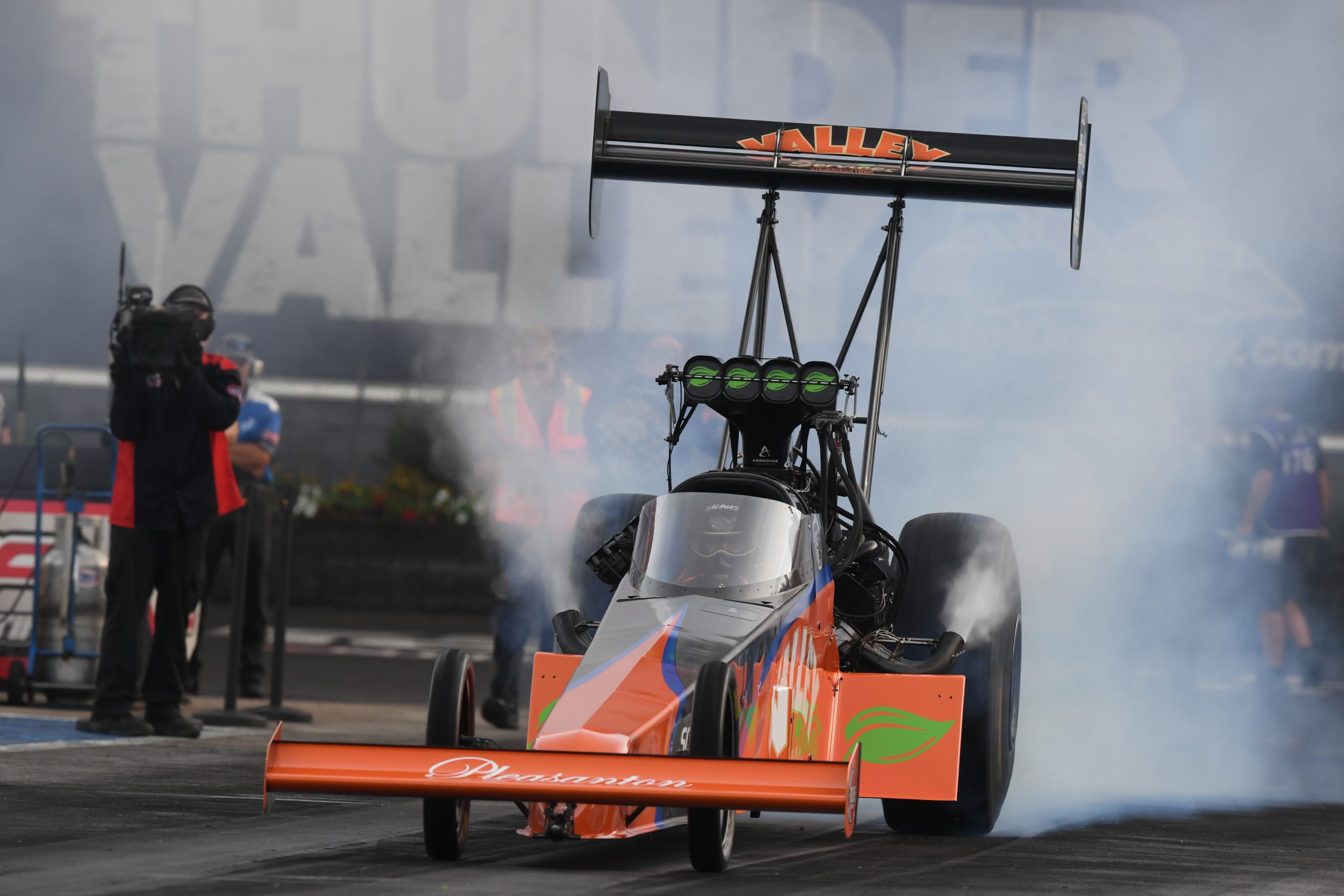 Mike Salinas rolled to the No. 1 qualifier in Top Fuel on Saturday at the NHRA Thunder Valley Nationals, moving a step closer to his third straight win in front of a huge crowd at Bristol Dragway.

Salinas powered to the top spot in his 11,000-horsepower Valley Services/Scrappers Racing dragster during the final qualifying session, going 3.767-seconds at 327.59 mph to earn his second No. 1 position this year and 10th in his career. Looking for his fourth win this year, Salinas has won the last two races at Bristol and also advanced to the last three final rounds at the track. He has felt right at home in Thunder Valley in recent years and will open eliminations on Sunday against Cameron Ferre.

“I’ve won on Father’s Day here before (in 2019) and it would be very special to do it again,” Salinas said. “This place has a special place in my heart. I don’t know why it likes me so much, but it’s just beautiful here. (But) I think tomorrow you’ll be surprised with how fast these cars go. I think they’re going to be in the low 3.70s. The good thing is, we’ve shown we can win from any spot. There’s no egos on this team and that has been really cool to see this year.”

Hight stayed on top in Funny Car thanks to his 3.971 at 310.98 from Friday in his 11,000-horsepower Auto Club Chevrolet Camaro SS, handing him his 73rd career No. 1 spot. It’s also his second No. 1 qualifier in 2022, as he continues to battle with Matt Hagan for the points lead. Both drivers have three victories and Hight will try for a fourth this year on Sunday. He admitted the team still has work to do on raceday to get the car running well in Bristol, but performing in front of a packed house on Saturday left him plenty motivated heading into eliminations.

“I definitely did not think that run (from Friday) was going to be the top,” Hight said. “We went up there the last run trying to run better, but it put a cylinder out early. Being in the position we’re in is really good because going into raceday, I still don’t think we have a great handle on this thing based on our last run. I have a good feeling if we’re able to make four three-second runs tomorrow, we’re going to be holding the trophy at the end of the day, and that’s the goal. This was an awesome crowd today. Seeing a packed house, it’s just awesome.”

Coming off a runner-up in Epping and racing at Bristol Dragway for the first time in his Pro Stock career, Stanfield jumped to the No. 1 spot on Saturday in his Janac Brothers Chevrolet Camaro with an impressive pass of 6.638 at 206.57. It gives the young standout his third No. 1 qualifier this season and fourth in his career. He’s been No. 1 three times in the past five races, but Stanfield, who opens eliminations against Wally Stroupe, is after his first win since February. Stanfield, who is second points, will look to become just the third active driver in the class to win at Thunder Valley along with defending world champ Greg Anderson and Erica Enders.

“The crew chiefs have been doing their job and they’ve been doing a great job,” Stanfield said. “All the guys on the car have been giving me the best car they can give me and it’s up to me to do my job tomorrow. It’s definitely very cool to qualify No. 1 here at such a great track. We haven’t had the best luck from the No. 1 spot yet in my career so we’re going to see if we can turn that around tomorrow.”

Rookie Camrie Caruso qualified second thanks to her run of 6.644 at 204.23, also making the quickest run in the final session, while points leader Enders, who is going for her fourth straight win, is third with a 6.658 at 205.63. 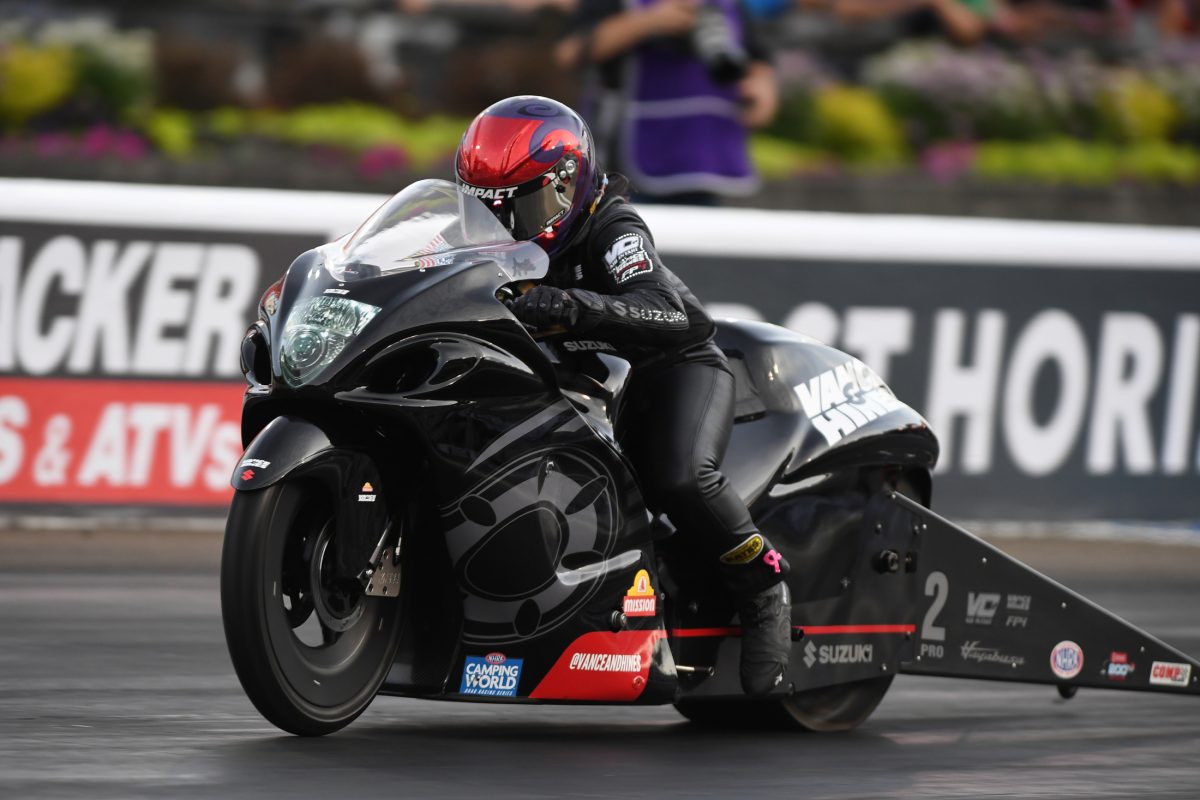 Looking for her second straight win at Bristol – and her first victory this season – Sampey has been nearly untouchable this weekend in Thunder Valley, qualifying No. 1 on her Vance & Hines/Mission Foods Suzuki with a pass of 6.874 at 196.04. Sampey improved on her time from Friday that initially had her in the top spot, also giving the three-time world her 55th No. 1 qualifier, and she’ll open raceday against LE Tonglet. Bristol has been very good to Sampey thus far and getting a first victory of 2022 on Sunday would ensure that would continue.

“I’ve been changing up my routine a little bit and I want to keep practicing that,” Sampey said. “(Crew chief) Andrew (Hines) and I have been working on that, Eddie (Krawiec) helps out as well. Andrew has been doing a great job. This Vance & Hines Suzuki is on a roll. The bike’s a beauty. I’m a little disappointed in my reaction time that round, I don’t know what I did wrong, but we’ve got tomorrow. I never thought I’d be No. 1 qualifier. I never thought I’d win the race last year so who knows what the heck will happen. I’m just hoping I’ll end up on the good side of things.”

Eliminations for the NHRA Thunder Valley Nationals at Bristol Dragway begin at 12 p.m. on Sunday.