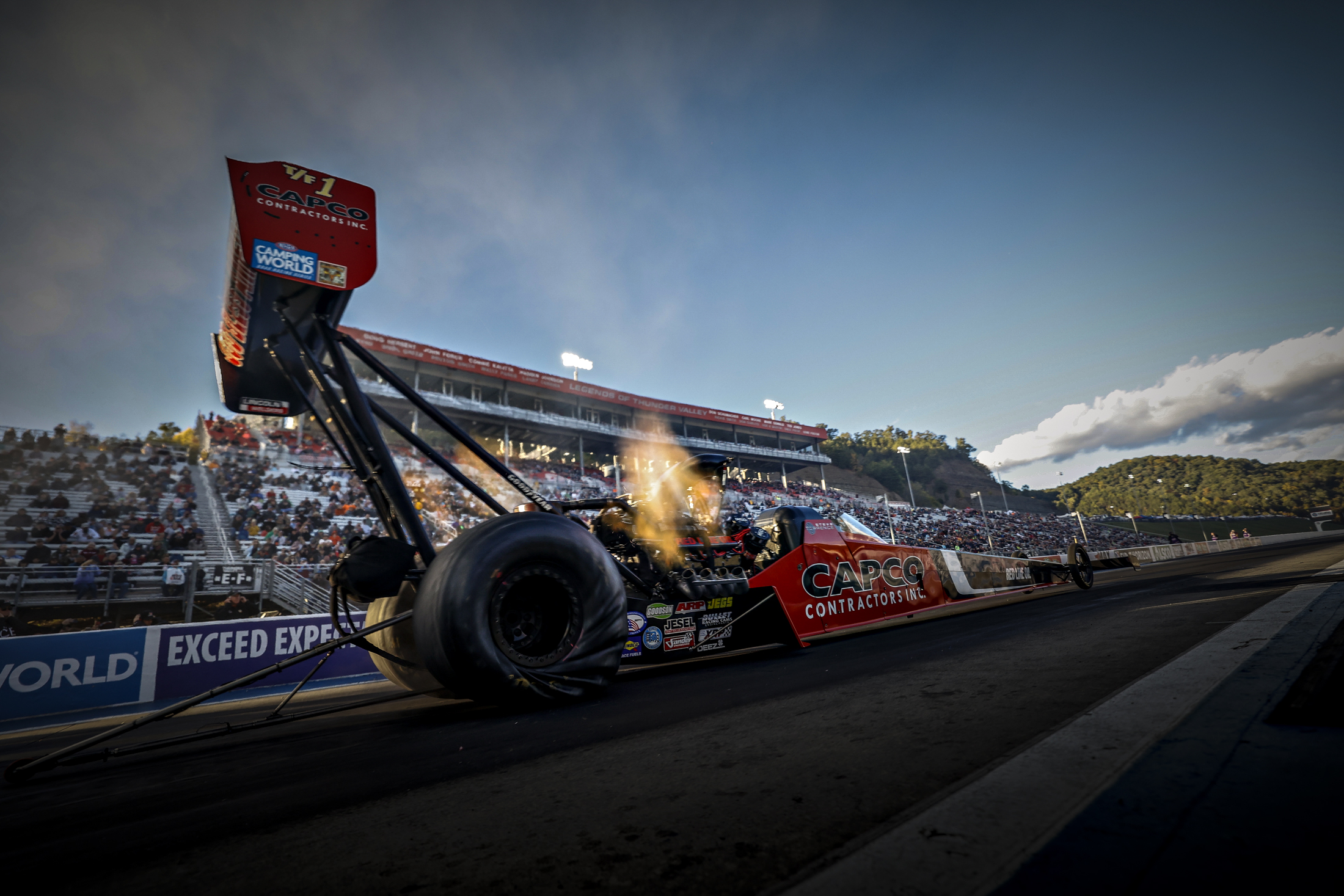 Top Fuel points leader and three-time defending world champ Steve Torrence powered to the track record on Saturday at Bristol Dragway, making the quickest run in Bristol history to qualify No. 1 at the NHRA Thunder Valley Nationals.
Alexis DeJoria (Funny Car) and Scotty Pollacheck (Pro Stock Motorcycle) also qualified No. 1 at the 18th of 20 races during the 2021 NHRA Camping World Drag Racing Series season and the fifth race in the Countdown to the Championship playoffs. In all, five of the six possible track records were broken during qualifying on Saturday at Bristol, which is hosting its first NHRA playoff races in track history.
Torrence closed out qualifying with a stellar run of 3.667-seconds at 331.28 mph in his 11,000-horsepower Capco Contractors dragster, giving him his fourth No. 1 qualifier this season and 31st in his career. It was the third time the track record was set in Thunder Valley already this weekend in Top Fuel, with Brittany Force doing it on Friday and Mike Salinas following with a 3.668 at 329.83 in the opening round of qualifying on Saturday. Torrence, though, topped everyone and will open eliminations against Cameron Ferre as he attempts to win a fourth straight world title. Torrence is also seeking his 50th career Top Fuel victory.
“That run was really big for us,” Torrence said. “We’ve been picking at that over the last few races. It’s something you just don’t get overnight and you really have to work at going mid-3.60s. The track here is great and it’s exceptional. On that run, the car was super quick early and it really pulled hard out the back. That was a confidence builder for tomorrow, so you’ve got to go out and be able to throw down. We’re in the thick of this championship and we’re going to have to give it our best shot every time.”
Salinas finished in the second spot, while Force improved to a 3.672 at 333.58, setting the track speed record as well on Saturday. 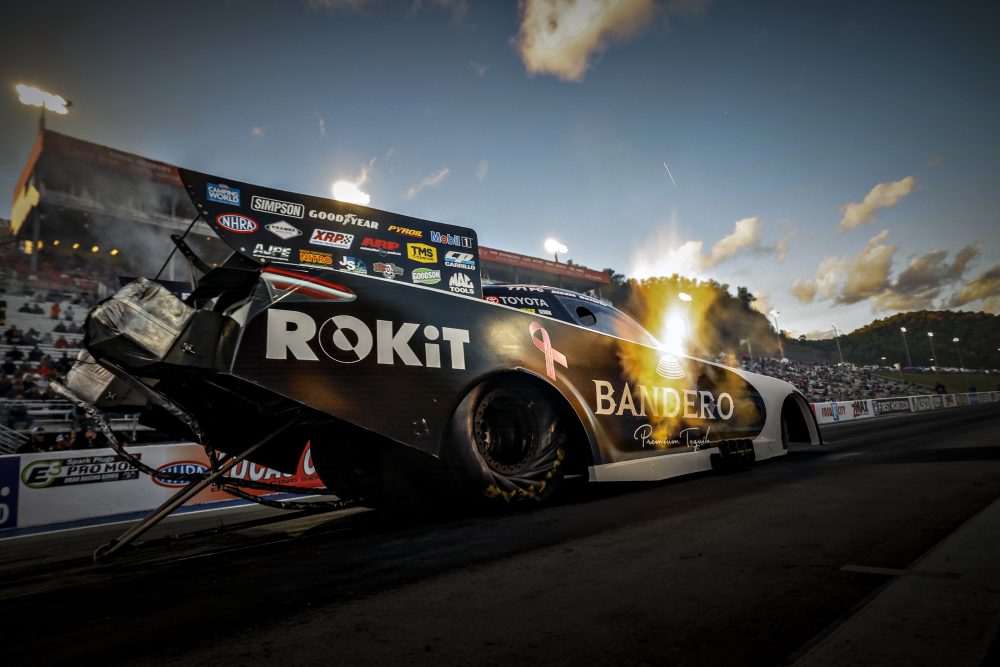 In Funny Car, DeJoria celebrated a big moment as she claimed her first No. 1 qualifier since 2016, going 3.907 at 326.79 in her 11,000-horsepower Bandero Premium Tequila ROKiT Toyota Camry. It was a big step forward for DeJoria, earning her fifth career No. 1 spot in the process. The standout run to close out qualifying also puts DeJoria in a good spot to try and claim her first win of the season, as the team looks to finish the 2021 campaign on a good note. She’ll open eliminations against Paul Lee on Sunday at a track that has always been special for her.
“This track has a lot of good memories for me,” DeJoria said. “It was the place of my first final round I went to with Del (Worsham) back in 2012, and to come back here with our team and get a No. 1 qualifier at this track is huge. This alone is so gratifying and means so much, and it kind of feels like a win. It’s just a huge weight lifted off our shoulders. We’ve got three races left and we haven’t won a race yet, so it’s crunch time and we’ve got to do it now.”
Ron Capps qualified second, going 3.945 at 325.61 and points leader Matt Hagan will start raceday from the third spot, going 3.958 and breaking the track speed record with a run of 330.31.

Pollacheck grabbed the No. 1 spot from his teammate in Pro Stock Motorcycle, Matt Smith, during the final pass of the day, earning his third No. 1 qualifier this season and fourth in his career on his Denso/Strutmaster/MSR Buell with a run of 6.859 at 197.80. He’s after his second win of the season and heads into raceday on a good note following his strong pass to close out qualifying.
“It’s so awesome to be here at Bristol and to be No. 1,” Pollacheck said. “To come here, someplace I’ve always seen on TV and I’ve always to come to because it looks so awesome, and end up with the No. 1 spot on the final qualifying run was pretty special. It was a good team effort and it was a good pass. It was a little surprising, but Matt told me afterward that if I rode it (well), it would go an .85.”
Smith, the defending world champ and current points leader, improved on his run from Friday, qualifying second with a 6.865 at 197.54 and Karen Stoffer jumped to third after going 6.867 at 189.26.
In the E3 Spark Plugs NHRA Pro Mod Drag Racing Series presented by J&A Service, Rickie Smith drove to the No. 1 position in his nitrous-powered Camaro, going 5.708 at 250.64 under the lights on Saturday to close out qualifying. Points leader Jose Gonzalez is second after his run of 5.733 at 250.32.
Eliminations for the NHRA Thunder Valley Nationals begin at 11:30 a.m. ET on Sunday at Bristol Dragway.