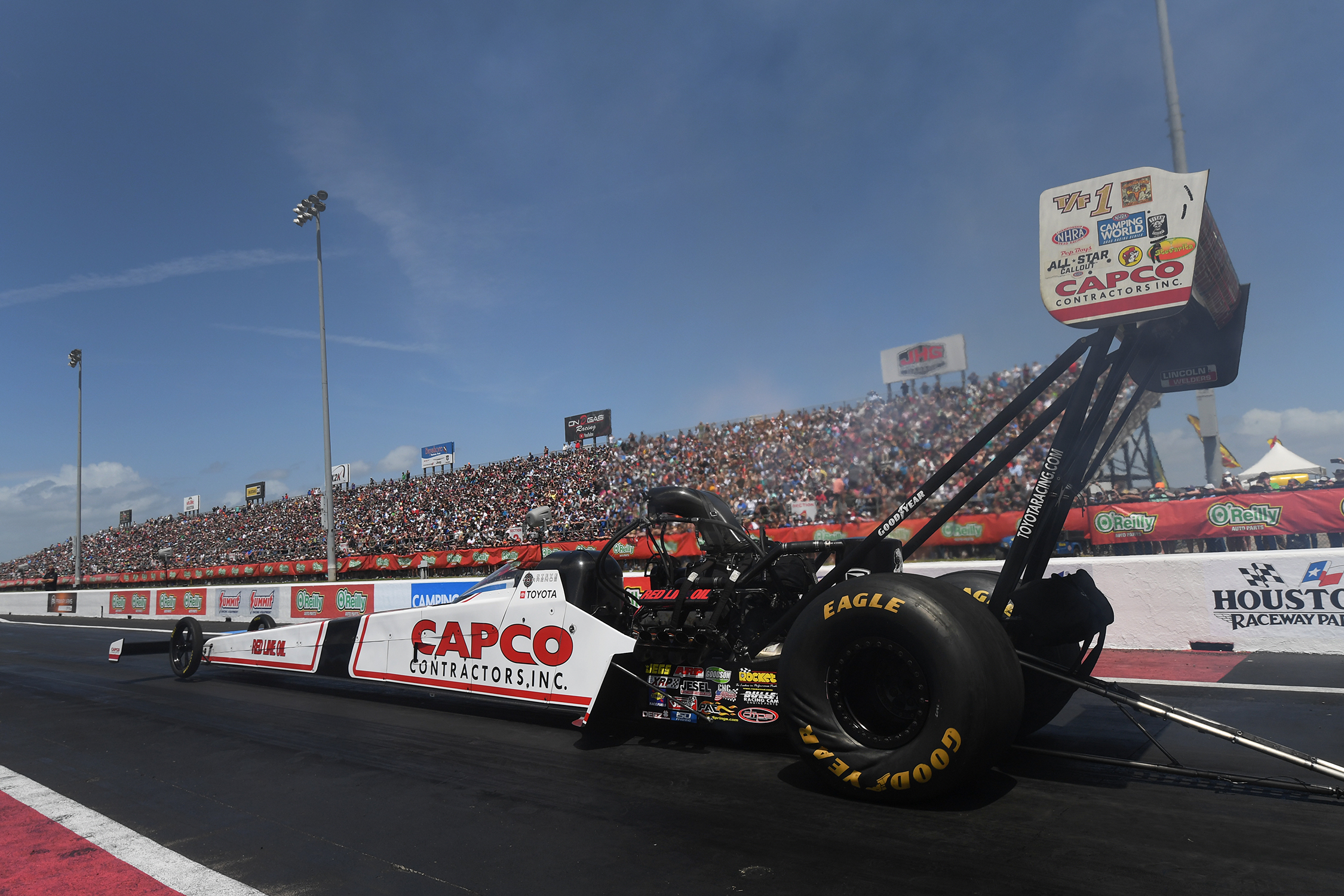 Four-time defending Top Fuel world champion Steve Torrence closed out qualifying in style on Saturday at Houston Raceway Park, vaulting past Brittany Force to claim the No. 1 spot at the final NHRA SpringNationals.

The Texan powered his way to the top with an impressive run of 3.693-seconds at 323.66 mph in his 11,000-horsepower Capco Contractors dragster, handing the points leader his first No. 1 of the season and 32nd in his career. With four different Top Fuel winners through four races, Torrence will try to become the fifth on Sunday to close out NHRA Camping World Drag Racing Series action at Houston Raceway Park. He’ll open eliminations against Buddy Hull, feeling good about his chances after a pair of strong runs in front of a huge crowd on Saturday.

“To go low E.T. of the round on that first run of the day was a huge confidence-booster,” Torrence said. “Only a couple of cars went down the track, so when you can do that, that’s a confidence booster. Going into the final session, (crew chiefs) Bobby (Lagana) and Richard (Hogan) said they were going to try to step it up a little bit. It went out and ran well. I knew we could have a good pass, but I didn’t know if it would be enough to go to the top. To go No. 1, that was great for us. Tomorrow is anyone’s game, but I think we’ve got a pretty good shot at it.”

Friday’s provisional No. 1 qualifier Brittany Force, who ran 3.695 at a track-record 333.58 a night ago, got bumped to the second spot after Torrence’s impressive blast, while Doug Kalitta took the third position thanks to his 3.696 at 328.70. In all, 14 dragsters ran in the 3.60s or 3.70s during qualifying in Houston.

Capps managed his second straight No. 1 qualifier thanks to his 3.864 at 327.66 from Friday in his 11,000-horsepower NAPA Auto Parts Funny Car, putting him in a great position to grab a fifth win in Houston. It’s his third No. 1 qualifier in 2022 and 32nd in his career, but Capps was just as impressed with the solid run his team put together in the heat to open qualifying on Saturday. It was the ideal boost heading into eliminations, where Capps knows he will have to be at his best to win in Houston.

“That first run in the heat was a big deal,” Capps said. “A lot of teams pushed it a little too hard and not many guys went down in that session. Our guys did a great job today and it’s going to be warm tomorrow, so we’ll take it. Every time I’ve won here, you literally feel like you’ve raced 2-3 races in one day. It literally takes everything out of you. It’s just a dogfight and you really feel like you’ve done something special when you win here.”

Caruso clinched her first career No. 1 qualifier in Pro Stock on Saturday, needing just five races in her professional career to do so thanks to her 6.547 at 209.39 in her Sand Haulers of America Chevrolet Camaro from Friday. The rookie has made a strong impression early in her career, and by reaching No. 1 spot in just five races, it ties her with Dallas Glenn among current competitors for the quickest number of races to earn a top qualifier. She’s also the fifth driver in NHRA history to earn their first No. 1 qualifier at Houston Raceway Park. Caruso will open eliminations on Sunday against Fernando Cuadra looking for the first win of her career.

“This means the world to me and my team and everyone who backs me,” Caruso said. “They definitely deserve it and we’re happy to head into raceday No. 1. I would never thought we could have achieved such a cool thing so soon. I just see it as another learning experience because the competition out here is crazy. We’re really heading in the right direction and it’s all because of my team.”

Houston native Erica Enders finished second and made a pair of quality runs in the 6.55s on Saturday. Her 6.553 at 210.87 from Friday gave her the second spot as she will try to win at her home track on Sunday. Points leader Aaron Stanfield finished third in qualifying with a 6.555 at 210.57.

After taking the provisional No. 1 on Friday, Stoffer was even better on her Ray Skillman Auto Group/Big St. Charles/Suzuki Extended Protection bike to close out qualifying on Saturday, going 6.738 at 200.35 to record her sixth career No. 1 qualifier. Stoffer obliterated the record books en route to the Gainesville victory last month and has been just as impressive in Houston. She’ll open eliminations against David Barron while trying to keep her hot streak going and pick up a third Houston victory as well.

“I’m just grateful and happy. It’s a happy bike and it’s so much fun to ride,” Stoffer said. “I’m so blessed and thankful to be able to ride it all the time. Houston has always been a special place to me. It’s where I won my first-ever national event and it’s very cool to wear the No. 1 hat here. I’m grateful every time the bike goes a little faster and it is truly a fun bike to ride. It’s only the second race, so there’s a big road in front of us, but I’m definitely enjoying every moment we have like this.”

Steve Johnson made a pair of standout runs on Saturday, jumping up to second and nearly getting past Stoffer with a run of 6.739 at 199.76. He also made a 200-mph run earlier in the day. Eddie Krawiec took third with a 6.798 at 200.08, while reigning world champ Matt Smith, broke his own track speed record with a blast of 201.37. He is qualified fifth.

Eliminations for the final NHRA SpringNationals at Houston Raceway Park begin at 11:30 a.m. CT on Sunday.