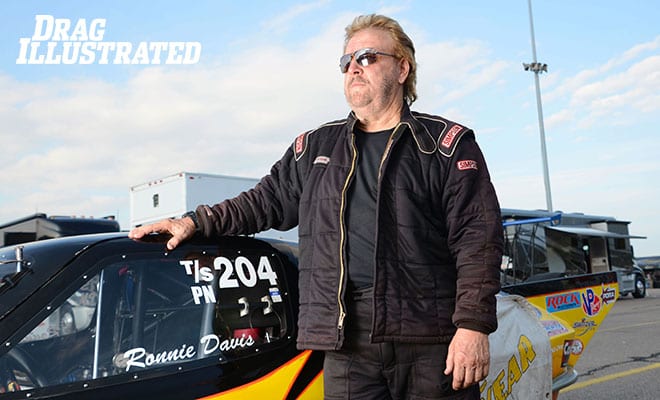 Ronnie “the King” Davis, 66, a five-time IHRA World Champion and the reigning PDRA Champion in the Top Sportsman class, succumbed Sunday to injuries suffered in the Saturday crash of his 1963 Corvette during qualifying for the third annual PDRA Spring Nationals at Rockingham Dragway.

Davis, a resident of Suwanee, Ga., had just completed a final qualifying run in 4.130 seconds at 178.19 miles per hour when his car turned left, then shot violently back across the track in front of the Chevrolet Camaro of rival Mark Malcuit, clearing the right side guardwall where it then barrel-rolled.

Davis was treated by medical personnel at the track before being transported to Moore County Regional Hospital in Pinehurst and later to UNC Medical Center in Chapel Hill.

In addition to a storied racing career that spanned more than a quarter century, Davis was owner of Davis Golf Carts in Suwanee. His business was the official pit vehicle provider to the PDRA and many of his racing rivals were also golf cart customers.

Early in his career, Davis was almost unbeatable at Atlanta Speed Shop Dragway where he dominated a competition called “King of the Hill.” That gave him his “Ronnie the King” nickname long before he ever won a national event or a world championship.

Davis is survived by daughters Michelle Seger and Bridgett Medina of Texas, as well as his longtime companion Micki Dearing of Suwanee.