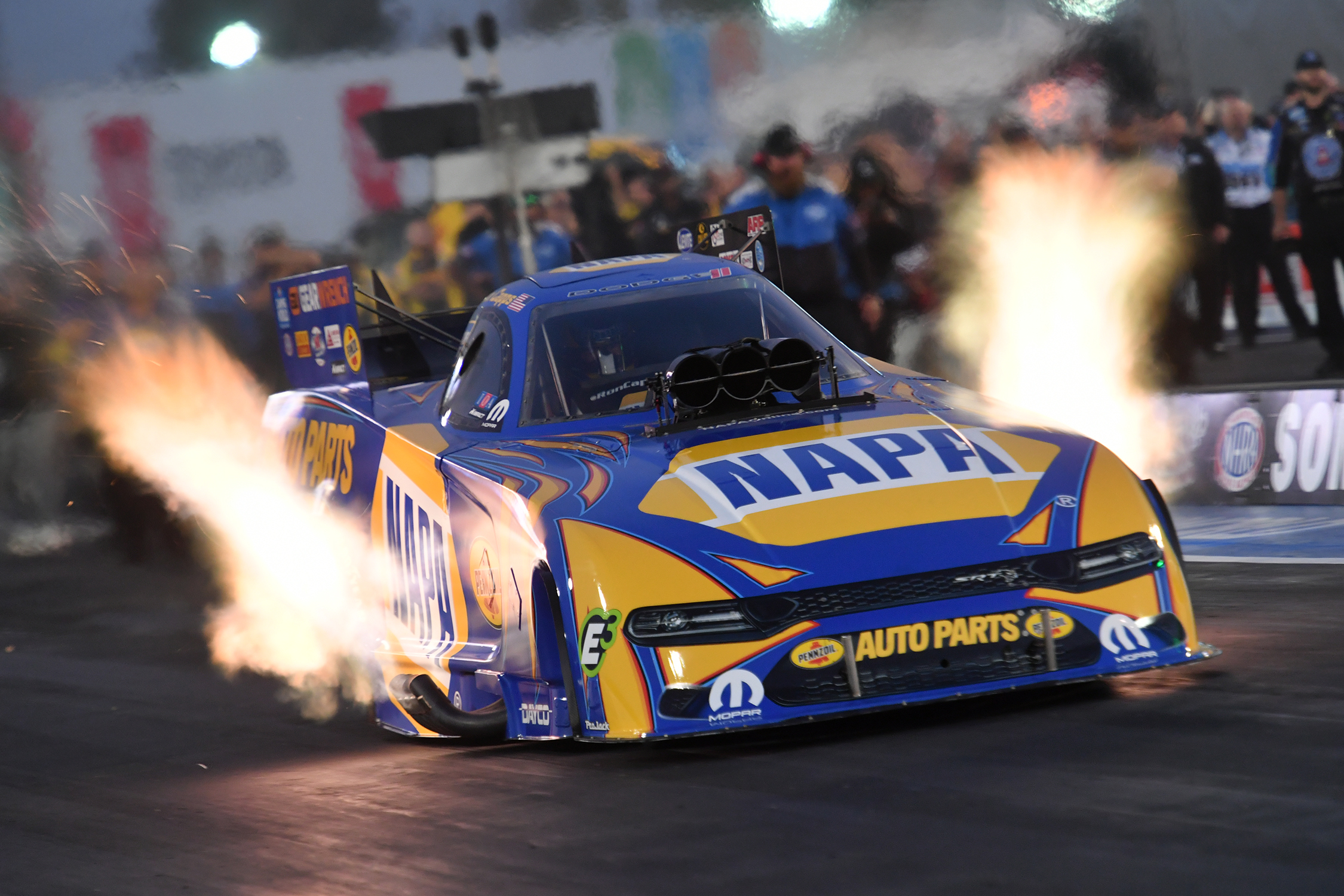 The last time Ron Capps was at Auto Club Raceway at Pomona, he was wrapping up his second career Funny Car world championship in the NHRA Camping World Drag Racing Series. Back at the same track for this weekend’s Lucas Oil NHRA Winternationals presented by ProtectTheHarvest.com to open the 2022 season, Capps has entered an entirely new world.

He’s been the reigning champ before in his 11,000-horsepower NAPA Auto Parts Funny Car, but never as a team owner. The veteran star took that major step for the first time this off-season, adding plenty of additional responsibilities in the process. But the two-time world champ is basking in excitement as he prepares to kick of the 2022 campaign in style.

“To say this is the most excited I’ve ever felt heading into the Winternationals would be an understatement,” Capps said. “Obviously 1997, making my debut as a rookie, driving for Don ‘the Snake’ Prudhomme was pretty exciting and overwhelming, but coming into this season as a team owner and driver, defending our championship, and then you add in everything that’s been going on in this very short off-season, plus having the backing of NAPA AUTO PARTS and GearWrench, and, it just gives me a lot of satisfaction.”

Leah Pruett (Top Fuel), Capps (Funny Car) and Aaron Stanfield (Pro Stock) were winners of the 2021 event, which took place in a summer a year ago but is now back in its traditional February spot to open the year. The event, which is also the 900th Pro Stock race, will be broadcast on Fox Sports 1 (FS1), including eliminations action at 10 p.m. ET. Capps has enjoyed plenty of success at Pomona over the years, including winning the Winternationals last season, which was a victory that spurred his run to the world championship.

Capps was impressively consistent down the stretch, qualifying well and making deep runs into eliminations. With the bulk of the same team returning, including crew chiefs Dean Antonelli and John Medlen, the goal for Capps is to keep on rolling. The team had a solid preseason test session, but nothing will come easy in a loaded Funny Car class that includes 16-time world champ John Force, 2020 world champ Matt Hagan, J.R. Todd, Robert Hight, Alexis DeJoria, Bob Tasca III, Tim Wilkerson and Cruz Pedregon.

“Pre-season testing went great. We had tremendous success with what we wanted to try,” Capps said. “Guido (Dean Antonelli), (John) Medlen and our entire NAPA AutoCare team had a plan. We went to Phoenix, made the runs we wanted to make, and now we’re set for Ron Capps Motorsports to make its first official NHRA appearance and begin our Camping World Series championship defense. It’s going to be a lot of fun this year. I’m very excited to get the season started in Pomona where we won the 2021 championship just a few months ago.”

In Top Fuel, the chase is on for the fifth straight world championship for Steve Torrence, who has been on a dominant run the last four years. He rolled to a title on the strength of 11 wins a year ago, including one in Pomona to close out the season. Torrence surpassed 50 career Top Fuel wins in the process, but the Texan isn’t basking in the success and is only looking forward as he prepares to take on all challengers in 2022 in his 11,000-horsepower Capco Contractors dragster.

It will be a packed field as well, as Torrence will have his work cut out for him trying to secure a fifth straight world title. That’s a long ways off, but Torrence would love a quick start against the likes of Pruett, who won the event a year ago and is now driving for her husband, NASCAR legend Tony Stewart, as part of the new Tony Stewart Racing team. Others to watch include eight-time world champ Tony Schumacher, who is returning to full-time action, veteran Doug Kalitta, Justin Ashley, Antron Brown, Clay Millican, Josh Hart, Mike Salinas, Brittany Force, Austin Prock and Shawn Langdon.

“I’m really looking forward to this season,” Torrence said. “Over the past four years we’ve managed to be very successful, and it’s nothing short of hard work from the ‘Capco boys’ on the race team and the ones back in Texas working on the pipeline everyday. We know that target on our backs grows bigger each and every year. But I’m glad I’ve got this team standing with me to keep pushing.”

While Pro Stock will be celebrating the 900th event in its illustrious history at the race, reigning world champ Greg Anderson is after historic numbers at the race as well. He became the all-time wins leader in the class a year ago en route to his fifth world title and his next win will give him 100 victories in his career. Trying to stop him will be a standout field, including four-time world champ Erica Enders, reigning NHRA Rookie of the Year Dallas Glenn, Kyle Koretsky, Stanfield, Troy Coughlin Jr. and Matt Hartford.

The event also will feature thrilling competition in the NHRA Lucas Oil Drag Racing Series, where future stars of the sport hone their skills. On Friday and Saturday, there will also be a special cackle fest in the Hot Rod Junction that fans won’t want to miss. After nitro qualifying on both days, fans can also enjoy a special wheelstander exhibition from the “Walking Tall” P.T. Cruiser Wheelstander driven by Guinness World Record Holder “NitroMike” Kunz.

Throughout the weekend, NHRA fans can take part in the special walking tour to see the cars and teams hard at work in the pits and can attend Nitro School with Top Fuel veteran Doug Foley to learn more about how the cars operate and reach their thrilling speeds. Auto Club Raceway at Pomona will also host the special pre-race ceremonies that introduce and celebrate each of the drivers racing for the prestigious Wally on Sunday. The final can’t-miss experience of any NHRA event is the winner’s circle celebration on Sunday after racing concludes, where fans are invited to congratulate the event winners celebrating their victories.

As always, fans get an exclusive pit pass to the most powerful and sensory-filled motorsports attraction on the planet at Auto Club Raceway at Pomona. This unique opportunity gives fans a unique chance to see teams in action and service their hot rods between rounds, get autographs from their favorite NHRA drivers and more. Fans can also visit NHRA’s popular Nitro Alley and Manufacturers Midway, where sponsors and race vendors create an exciting atmosphere that includes interactive displays, simulated competitions, merchandise, food and fun for the entire family.