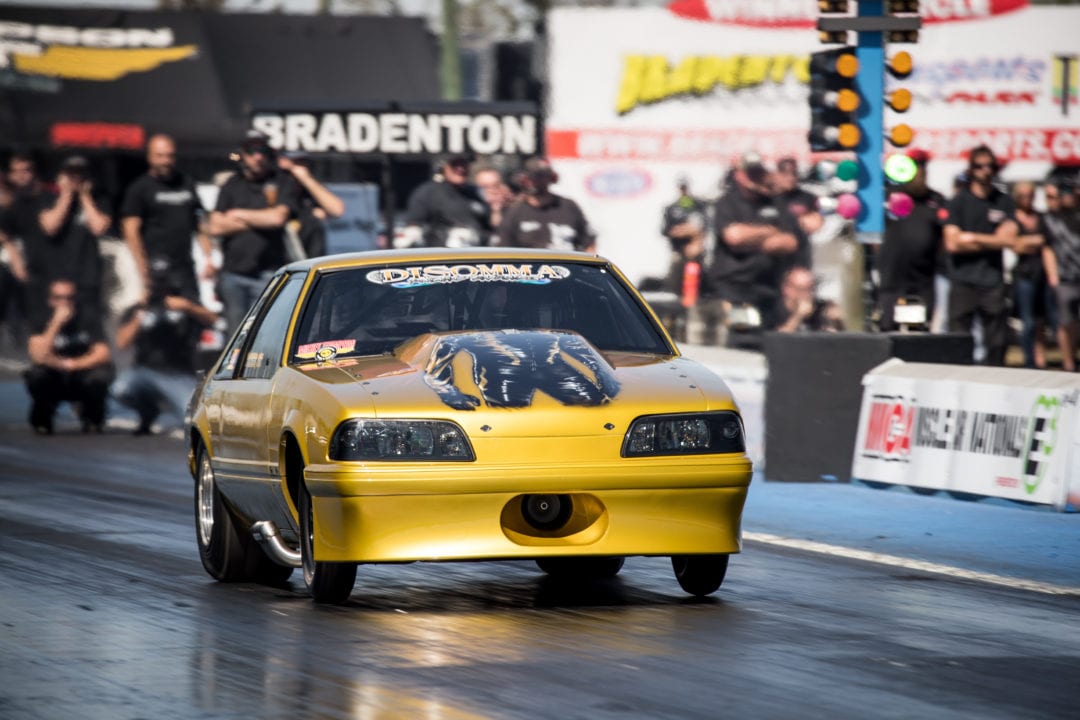 The racing was extraordinary at the 16th Annual NMCA Muscle Car Mayhem, March 8-11, 2018 at Bradenton Motorsports Park in Florida.

In VP Racing Fuels Xtreme Pro Mod, where the quickest cars on the property pounded pavement, Randy Adler ran a personal best of 3.70 in his Bel-Air on his way to the top in qualifying. While he was poised to make it past copious amounts of cutthroat competition, he was forced to lift in the first round of eliminations, and that opened the door for a final round featuring Don Walsh Jr. and Jason Hamstra. Both drivers were close on the tree, but Walsh Jr. wheeled to the Aerospace Components Winner’s Circle with an incredible 3.70 to Hamstra’s 3.74.

In Mickey Thompson Radial Wars, DeWayne Mills motored to a 3.88 in his Camaro to lead qualifying, but in the final, James Lawrence landed a 3.94 and the win in his new Corvette over Marty Stinnett, who turned on the red light with his Mustang before running it out to a 3.85. Vortech Superchargers Street Outlaw saw Daniel Pharris post a 4.36 in his Mustang to set the pace in qualifying. The final round, however, saw Shawn Ayers advancing to the win with a 4.33 in Fletcher Cox’s Gold Dust Mustang (pictured above) over Pharris, who was also 4.33, but not quite as quick at the hit. 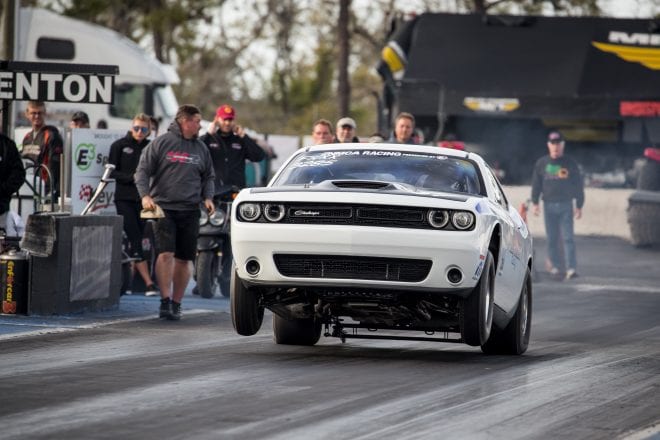 In Holley EFI Factory Super Cars, Geoff Turk took the lead in qualifying with a 7.99 in his Challenger to become the first driver to break the 7-second barrier in the class, and earn a massive monetary bonus through Holley EFI’s 7-Second Club. He also made it to the final round of eliminations, but Joseph Welch took the win with an 8.02 in his Drag Pak, while Turk took his car through the stripe at 8.12.

ARP Nitrous Pro Street saw John Lastinger led-foot to a 4.59 in his Camaro to lead qualifying, and in the final, Jordan Ensslin won with a 4.46 over Mark Hoadland, who was forced to lift in his Camaro.

In Fastest Street Car NA 10.5, Mike DeMayo Jr. drove to a 7.79 in his Mustang to set the pace in qualifying, be the first in the class to achieve 7.70s and to set a class elapsed-time record. While he was one to beat, a fire erupted under his car when he was staging for the second round of eliminations, ending his weekend. A few rounds later, Robbie Blankenship lined his Mustang up alongside Tommy DeLago and his Chevy II. In what race announcer Brian Lohnes described as “a very strange final round,” DeLago’s car leaped off the line before the tree activated, and Blankenship then gave chase and won.

Edelbrock Xtreme Street put the spotlight on Jamie Stanton, who drove to a 4.73 in Scotty Guiler’s Cutlass to lead qualifying, and while he made it to the final round of eliminations and improved on that number with a 4.72, Bart Tobener took the holeshot win with a 4.75 in his Mustang. 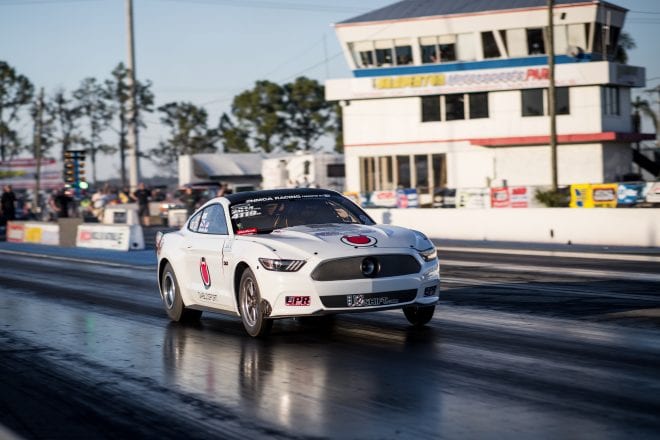 In Chevrolet Performance Stock presented by Scoggin-Dickey Parts Center, reigning class champion Jesse Wilson wheeled to a personal best of 10.02 in his Camaro to lead qualifying, and while he slowed in the final round, he won with a 10.18 over Haley Rounsavall and her 10.21 run.

In MagnaFuel Open Comp, Kurt Anderson recorded a .001 reaction time in Jim McMillan’s Regal to lead qualifying, but the final round featured Ricky Pennington and his Chevelle and Jason Henson and his Mach 1. When the tree dropped, both drivers recorded comparable reaction times, but Pennington won with a 10.60 on a 10.58 dial — backing up last year’s win at this event — while Henson was 12.03 on his 12.01.

In ATI Performance Products Nostalgia Super Stock, Robert Killian ran to a 9.50 on his 9.50 index in his Dart to lead qualifying, but the final round belonged to Corky Bumpus and his ‘Cuda and T.D. Holland and his AMX. Bumpus bettered Holland with a 10.78 on a 10.75 index to Holland’s 10.03 on a 10.00 index.

Adding even more excitement to the event was the debut of the NMCA/Dodge/Mopar HEMI Shootout, which partners the NMCA with Dodge//SRT and Mopar brands for a True-Street-style, drag racing experience at all six NMCA events this year. Notable was the large turnout, and Bill Lee Jr. was the overall winner with a 10.32 average. It was also the first competition win for a Dodge Demon. Buzz Schaberg was the runner-up with an 11.01 average, Dennis Latow was the 11-second winner, Donald Scheid was the 12-second winner, Neva Overstreet was the 13-second winner, and Dave Burnett was the 14-second winner.

Because of rain, two separate bracket races that were to take place on Saturday and Sunday combined for a single race on Sunday, with double points on the line. In Bracket 1 (Super Pro), Jon Siegel won with a 6.22 on a 6.24 dial in his Malibu wagon over Elizabeth Keene who turned on the red in her dragster, and in Bracket 2 (Pro), Taylor Bouldry bettered Mickey Pearce with a 6.45 on a 6.48 dial in a Camaro when Pearce turned on the red light in a Camaro. In Bracket 3 (Sportsman), Gage Burch won with a 13.26 on a 12.94 dial in a Malibu over Kimberly Richard, who was 11.91 on an 11.90 in a Monte Carlo.

There will be twice as much competition and camaraderie at the next event in the six-event NMCA Muscle Car Nationals presented by E3 Spark Plugs series, as NMRA and NMCA drivers will join for the 10th Annual NMRA/NMCA All-Star Nationals, April 5-8 at Atlanta Dragway.