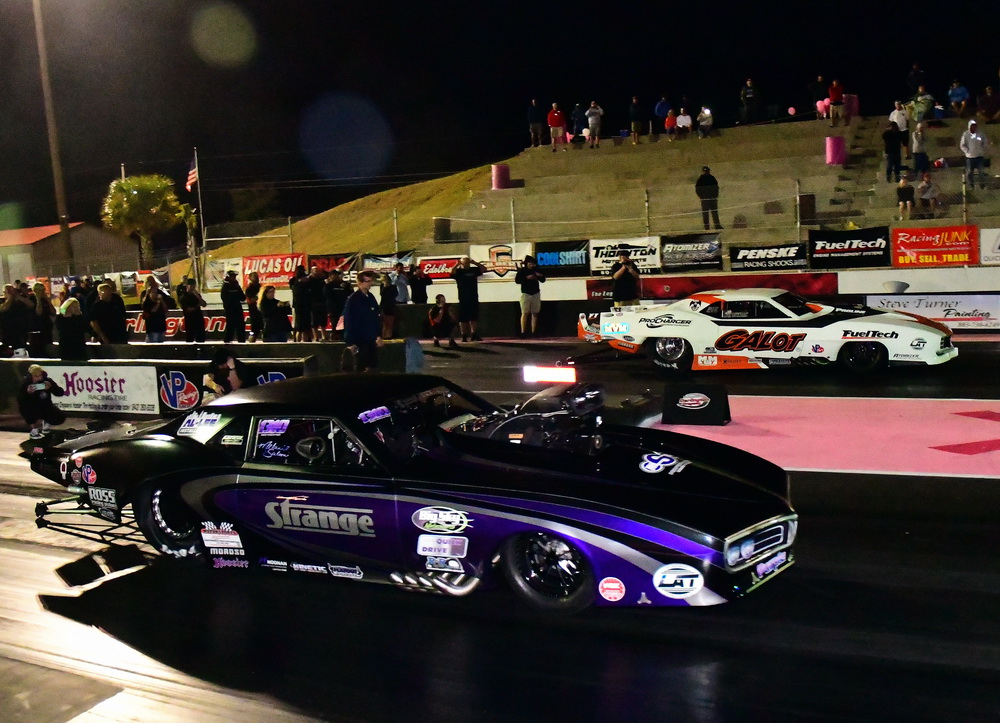 Kevin Rivenbark’s gained considerable ground in his pursuit of a second Pro Boost world championship when he marched through an all-star line-up of opponents to claim his second win of the season. In the final round, he left first with a .008 reaction time in his ProCharger-boosted GALOT Motorsports ’69 Camaro and held off Melanie Salemi and her .014 light in her roots-blown “Purple Reign” ’68 Firebird. Rivenbark reached the eighth-mile mark first with a 3.643 at 206.42, followed closely by Salemi’s 3.655 at 205.48.

“I think every round, having an eight-car field, there was not a round that was given to anybody,” Rivenbark said. “It was unbelievable the lights we had. I think this is one race I can say there’s not a round I felt like I had given to me. Randy [Weatherford] had some bad luck next to me, but if he didn’t have that it would’ve been a tight race also because he’s running very well so far.

“I think overall it was a great race,” Rivenbark added. “It put us around 290 points over [Kris] Thorne going into Virginia. Makes me feel a little better and breathe a little better, but it’s still anybody’s game. Anything can happen.”

Rivenbark’s race day started with low ET of the event, a 3.632 at 208.24, to take out James Beadling in his roots-blown ’68 Camaro. The Steve Petty-tuned GALOT Motorsports Camaro stayed consistent in the second round, running a 3.637 at 205.86 to win over No. 1 qualifier Randy Weatherford, whose ProCharger-boosted ’19 Camaro stumbled off the line and idled to a 14-second pass. 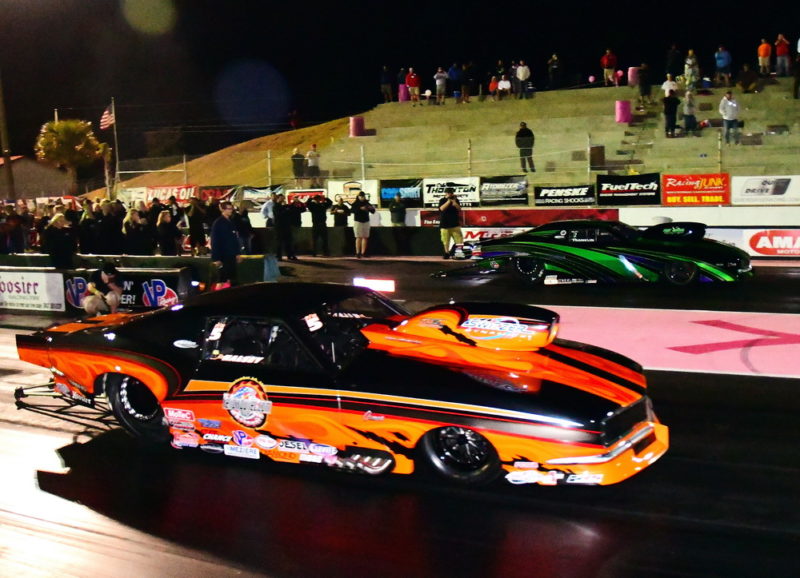 The Fall Nationals included bracket racing in multiple classes, but somehow, Jim Halsey’s 3.60-second Pro Nitrous ’68 Camaro was the most consistent race car on the property. He drove his Brandon Switzer-tuned, Fulton-powered Camaro to four consecutive 3.62s in eliminations, capping it off with a 3.626 at 207.85 to defeat two-time world champion Tommy Franklin’s 3.641 at 206.90 in the final round.

“It’s kind of like a dream come true,” Halsey said. “If we could’ve set the record, that would’ve been icing on the cake. We made some good runs today, just not quite good enough [to set the record]. We’re very, very happy.” 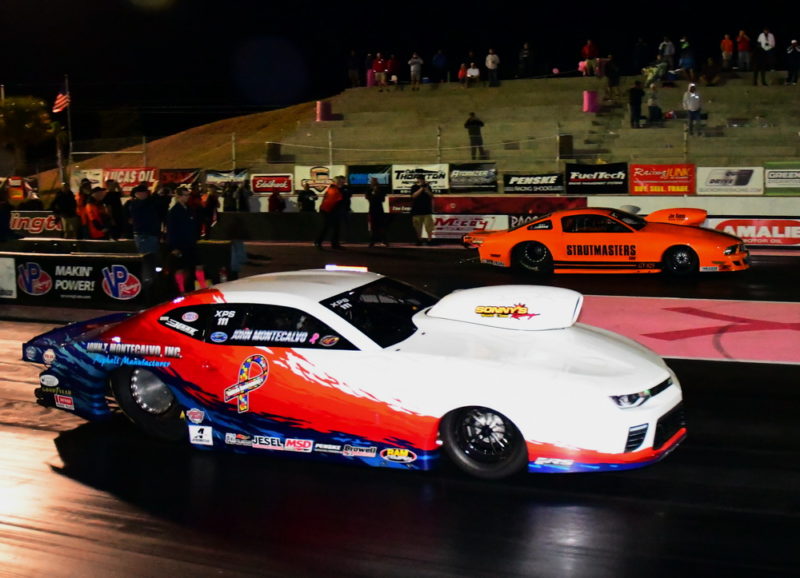 The Extreme Pro Stock final round was a battle between a seasoned Mountain Motor Pro Stock veteran, John Montecalvo, and a rookie, Johnny Pluchino. Pluchino, the 2018 Pro Outlaw 632 world champion, left first in his father John’s Strutmasters.com ’13 Mustang, but Montecalvo in his drove around his 4.158 at 175.85 with a 4.075 at 176.89.

It was a familiar position for Montecalvo, who experienced similar success with his Sonny’s-powered ’18 Camaro at the PDRA Northern Nationals in Ohio in July. He left Ohio with the points lead, and clinched his first PDRA world championship with the Darlington victory.

“This is exactly where we left off in Ohio – we qualified No. 1 and we won the race,” Montecalvo said. “I gotta say, I was most anxious coming to this race because for me it was a long layoff [since Ohio]. Any time I’m not behind this wheel every three or four weeks, I start getting a little bit nervous. My crew did a great job. They gave me a good car. I did a really good job driving, if I must say so myself. We went to five finals in a row with this car. We actually missed the Virginia race and we could miss the next Virginia race and still sewed up the championship.

“[Crew chief] Tommy Lee, William, Bobby, and of course my beautiful wife, Lois Anne; they all stood by me and we jelled really well together this year,” Montecalvo continued. “We got a great team here, we just want to keep this thing going.”

Montecalvo’s first two opponents went red, handing him the win lights at the starting line. He was ready for Jeff Dobbins’ first-round 4.082, though, as he ran his weekend-best 4.072 at 177.65. He slowed to an 8-second run after Chris Powers negated his 4.036. 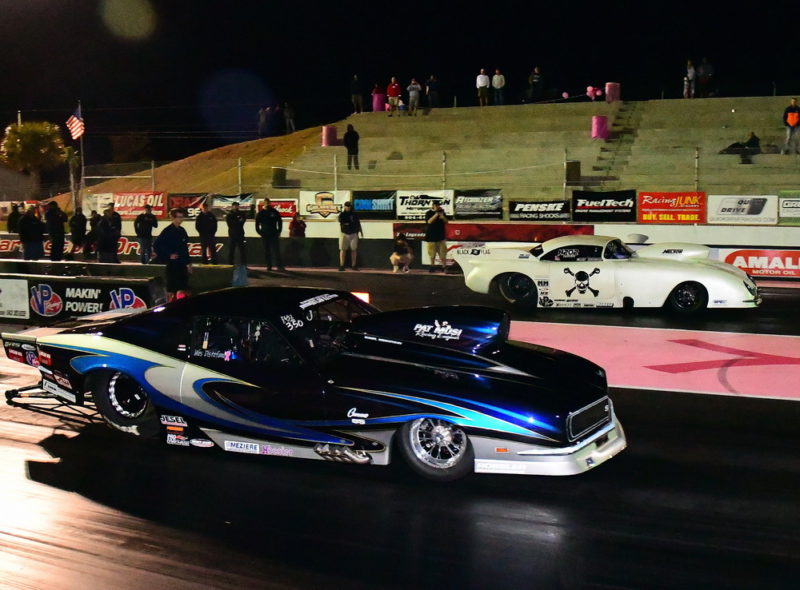 Wes Distefano was an immediate standout in Pro Outlaw 632 when he made his debut at the 2019 season opener in April. He reached the final round there, and again two races later at the Mid-Atlantic Showdown in Maryland. After grabbing his first No. 1 qualifier award Friday night, Distefano earned his first event win Saturday night. He drove his Musi-powered $hameless Racing ’68 Camaro around Chris Holdorf’s holeshot advantage to win with a 4.17 at 174.55 over Holdorf’s 4.303 at 163.76.

“It felt really good to close the deal,” Distefano said. “We’ve been really, really close and we put in a lot of hard work. To have it all pay dividends now, it feels really good. I don’t celebrate much and I’m always looking to the next thing, so we’re ready to get back to work.” 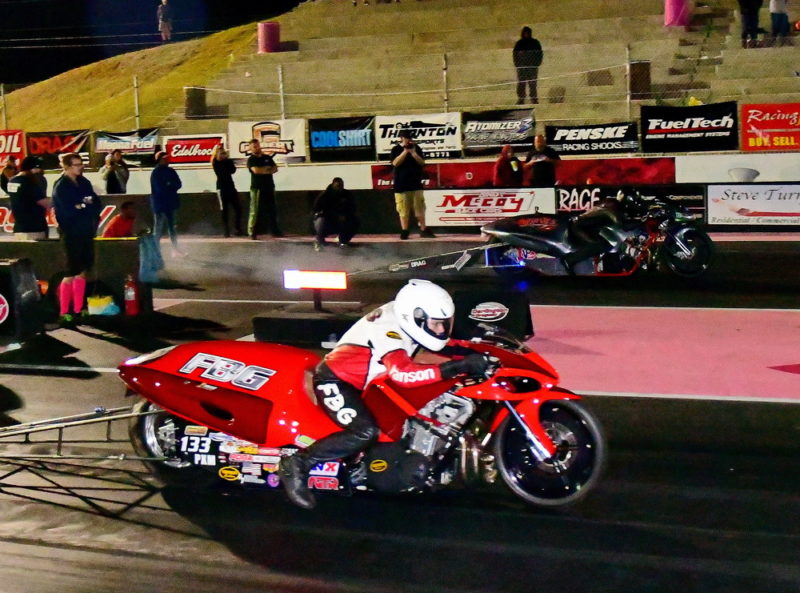 Cool weather conditions and a tightly prepped track helped Paul Gast set and reset the Pro Nitrous Motorcycle elapsed time record on his way to the event win in just his second PDRA appearance of the season. In the final round, Gast’s Fast By Gast Hayabusa was ahead of Chris Garner-Jones and his Jones Racing Hayabusa from start to finish. Gast ran a 4.234 at 169.88, while Garner-Jones went a 5.794 at 84.08.

“First of all, Darlington Dragway could be my new favorite track,” Gast said, who also won at a motorcycle-only race at the South Carolina facility one week ago. “We had a stellar field here. My bike was outstanding until the final. I did still win, so I’m happy, but I wanted to really throw one down there. Setting the record was probably the highlight. To go a 3.94 on a bike is really, really good.”