With the consistency of a bracket car, Chris Rini qualified number one, set low ET, and won the last Big Dog Shootout sponsored by ZDD Plus this year, beating Todd Tutterow Nov. 17, in a close final round.

With both drivers equally comfortable negotiating the eighth mile at Piedmont Dragway, the “DoorSlammer Capital of the World,” Tutterow got away first with a great .010 light, but his 3.92 wasn’t quite enough to hold off a 3.86 pass by Rini in the closest Big Dog final in quite some time at Piedmont.

Unfortunately, the planned North/South event did not happen, three of the qualified drivers were on the property: Ed Burnley, Randy Weatherford and Tommy Gray in his new ”UnderTaker” Corvette. With regulars Jr. Ward, Charles Terrell and Travis Harvey making up the rest of the eight-car Big Dog field, regular competitor Ed Hoover did not make the cut in qualifying. 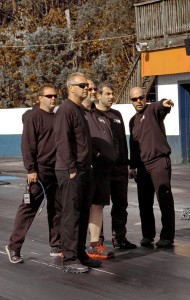 In eliminations, Rini ran 3.84, and 3.83 to reach the final defeating Weatherford in the first round and Burnley in the semi. Tutterow, likewise ran 4.05 and 5.30 in a single semi-final to reach Rini in the final.

The Wild Side Customs-sponsored Renegade series saw John Lassiter run the first 4-oh pass in competition. Qualifying number one, the always smiling Lassiter laid down an outstanding 4.07 for the number-one spot, with Larry Pearce also impressive with a  4.09 in second, Tim Lawrence (top) at 4.15, and Sandy Wilkins’ brand-new Camaro at 4.16 seconds. The bottom half of the field had Jay Cox fifth at 4.20, Brian Schrader at 4.25, Brett Nesbitt at 4.29 and Jamie Chappell at 4.42 seconds. Charles Terrell, performing double duty on his birthday for this event, and Wayne Hawkins did not qualify.

When eliminations began, however, Terrell got in due to Schrader and Nesbitt being unable to make the call for the first round. Lawrence ran 4.13 and 4.16 to reach the birthday boy in the final. Once there, Lawrence picked up another win—along with the season points title—by running 4.25 to defeat Terrell.

In other competition, Brian Baker won in Outlaw Door Slammer, Ricky Clark won the 6.00 Raider class, and Ken Myrick won the 7.49 class. The 4.90 Extreme category ended with a coin toss between Randy Anderson and Nick Cline, who split the money due to curfew.

The 2013 Big Dog by ZDD Plus points champion is Danny Perry, followed by Rini, Harvey, Matt Giangrande and Jason Harris. In Wild Side Customs Renegade, Lawrence was the points champ with Cox second, Chappell third, Lassiter fourth, and Pearce in fifth.

Additionally, new cars for Terrell and Andy Beal will soon be finished by Robert Harris Motorsports and a new Jerry Haas Mustang for the Jerry Williams team is scheduled for delivery in early December.