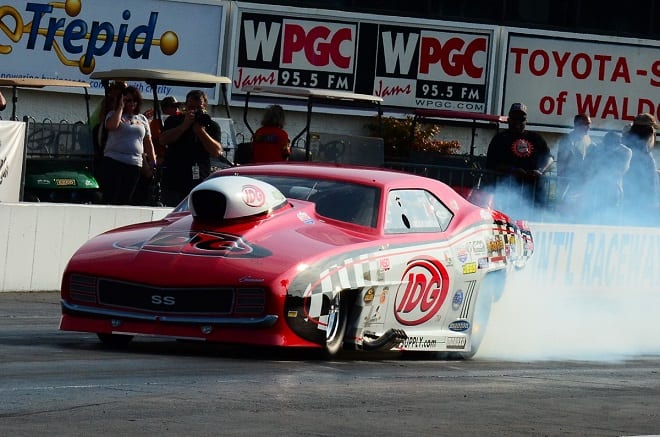 It started in 1976. Twenty-three year old Rickie Smith had only been in racing two years when IHRA opened up a class called Super Modified. The heads up nature of the class appealed to the young North Carolina native, who had, by that time, been bitten by the racing bug. Rules called for small block, single carburetor horsepower, what Smith calls “miniature Pro Stocks”. Smith dominated the class in ‘76, winning his first championship, just one of many to come. The following year, he not only successfully defended his championship, but defended it so well that IHRA did away with the class. He lost only two events all season and maintained a half a tenth to a tenth above the rest of the field. He was untouchable. 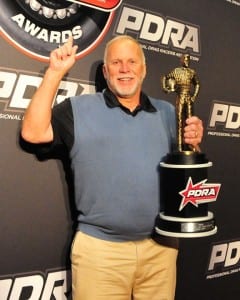 Thirty-nine years and another eight championships later, it would seem Rickie Smith is still untouchable, although in a different way. He’s now won three championships in three years: back to back NHRA Pro Mod Championships in 2013 and 2014 as well as the 2015 PDRA Pro Nitrous World Championship. This is quite a feat for anyone to accomplish, yet alone someone over the age of 60. Add to that the fact that Smith drives his own rig to and from the track, does much of the maintenance on his car in between rounds and makes all his own tuning calls and it’s safe to say that Smith is in a league all his own.

“I don’t think people think much about what I’m doing because they’ve seen me just do it and do it and do it, but there’s no one else doing what I’m doing on a professional level [at my age],” Smith emphasized. “I’ve never had more than three people on my team. The last few years it’s just been me and Chad [Hester]. I drive my own truck. I get to the race, I put the awning up with Chad. There’s a lot of work in between rounds for two people to do. I have to make all my own decisions. Chad does the clutch every round. I have to look out for the motor. If something comes up with the rear end I have to jump back there and change the rear end in the car by myself and check on the motor and then go back up next round and try not be late on the tree.

“Since the day I started racing I’ve been able to keep that mindset to keep my mind straight and calm and not make mistakes. That’s the whole deal about drag racing: you can’t make mistakes. You’ve got to be almost like a robot in there. In NASCAR you can blow a tire and hit the wall and still come back three hours later and win the race. In drag racing it’s all over within four to seven seconds. You make a two or three hundredths mistake and you’re going home. I don’t care what age you are, it’s hard to keep your mindset and fool with hundredths of a second.”

As a professional racer by trade, Smith is at the track as much as possible, keeping his IDG-backed Camaro in the eyes of fans and fellow race teams. He ran two series in 2015 for a total of 18 events. Despite missing the first event on the PDRA tour this year, his success at the remaining eight stops was enough to edge out PDRA frontrunner Tommy Franklin for the 2015 Pro Nitrous Championship, with wins at the Spring Nationals, the North-South Shootout and Dragstock, plus a runner up finish at the Mid-America Open and three semi-final finishes throughout the season.

With as much success as Smith has had in his racing career, one might suspect that a tenth championship would be just another trophy on the shelf. But this one meant more to Smith, because for the first time, his entire family could really enjoy it with him. Smith’s three children have all followed in his footsteps. His only son, Matt Smith, has had great success in NHRA Pro Stock Bike. His eldest daughter Amanda continued in racing through marriage to NASCAR and Global Rallycross standout, Scott Speed and the youngest, Melissa, married drag racing nitrous guru Brandon Switzer of Switzer Dynamics. Due to various conflicts, Melissa wasn’t able to celebrate the 2013 and ‘14 NHRA Championships with Smith.

“I’ve always had my family and my kids. It was tough the last couple of years not having Melissa around. When I won my last two in the late 80s Melissa was just born. She never got to enjoy those. I was able to pull off a couple of championships here even at 60 and 62 years old and my daughter didn’t even get to enjoy them with me. To be able to pull this championship off in the PDRA and have her around to celebrate with me – that’s what it’s all about. Melissa secretly planned with the PDRA to present the award to me on stage at the banquet. It was a neat deal. Knowing that she’s never gotten to enjoy any championship with me and then she got to be there and see this one and to see how hard her dad is working to do this stuff, meant the world to me.”

The moment on stage with Smith and his daughter was an emotional one. Smith accepted his award and spoke through tears during his speech. It was a touching highlight of the PDRA World Championship Awards and a moment that will standout in drag racing history for years to come.

“I want to say a big thank you to Chad Hester,” Smith added, highlighting his sole crewman. “That guy has been with me five years now. You’ve got to have somebody like him to work as hard as I work him. There’s not many people that’ll do what Chad and I do. It’s hard to get young kids to work that hard anymore. I appreciate him.

running it. There’s not as much politics involved in it. You got good racers. It’s kind of like the old IHRA days in a way. One of the biggest things is you get to run nitrous cars against nitrous cars. In NHRA you’ve got turbos, blowers and nitrous. It’s really hard to try to keep the rules where everybody is competitive. Nitrous is the lowest horsepower cars out of the three over there. So they’re always having to knock [the blower and turbo] cars back so we can run with them. It’s just a battle. I’m building a turbo car right now that I’ll run some next year, but I kept one of my nitrous cars. Just going to see how things go next year on the NHRA side to see what car we end up with.”

Before Smith can get started on his own 2016 season, however, he first must take his annual trip to the Middle East to help tune and setup cars within the Arabian Drag Racing League. When he returns to the U.S. in late February, he’ll head to Jerry Bickel’s to pick up his new turbo car and plans to test it in the beginning of March. Smith’s primary sponsor, IDG – Industrial Distribution Group – will be back again for the 2016 season, giving Smith the fuel he needs to defend his Championship.

“IDG is under new ownership and I’m thankful that Lisa Mitchell, the new President of IDG and Hagemeyer NA, has signed another contract with me. For them to step up and continue supporting me really means a lot. I’m thankful to Lisa and Joe with IDG for carrying me on into 2016. They’re actually getting more involved in motorsports by providing MRO products and inventory management expertise for motorsports teams and manufacturers. I’m glad they’re going to be more involved in racing. It looks good right now. I just need to go out and do my job and be competitive. I’m happy where I’m at and I’m going to keep going along, but when IDG is done, I’m pretty much done. I’ve decided that when they pull out that’s my sign to retire.”

Until then, however, Smith is determined to continuing giving his passion turned profession his all. “I was Athlete of the Year my senior year in high school and I’m just that type of person. If I’m going out there you can bet I’m going to be 200% trying to win the championship. If I die because I worked too hard under the car then my wife knows I left here happy. I just still want to be with my family and do something that I love to do.

“I don’t care if you’re 25 years old or if you’re 62 years old, you never know when you’re going to win your next race or if you’ll even win another race. I understand that because I’ve been through the ups and downs. Every race you win anymore, you just gotta know that that might be the last one you ever win. And if it is, that’s okay. I’ve won a tremendous amount of races and 10 championships now throughout my career. You can about put all the people on one hand that have won that many professional championships. I just stop and think, 62 years old and I’m winning professional championships. The only other person I know even doing anything like that is John Force.

“The Lord has blessed me in a lot of ways to let me keep winning and doing what I’m doing. It’s pretty awesome for me to keep doing this at this age.”

The PDRA congratulates 2015 Pro Nitrous World Champion Rickie Smith and applauds him on a legendary career.