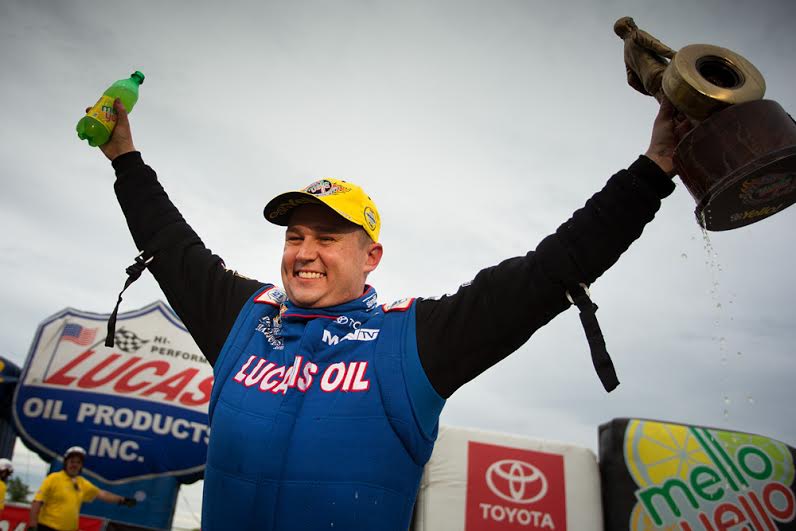 Since scoring his first career victory in Englishtown, N.J., last June, Crampton has won four times in 24 races — equal to a full season — second only to championship-winning drivers Tony Schumacher and Antron Brown, each of whom has won five times over that span.

“We’ve got all the tools to win races like this and all the staff to make it happen. I’m happy with my progression, but I still need to knuckle down and try to do a better job in the race car.”

Crampton reeled off a string of 3.7-second passes Sunday to score his second victory of 2015 and his second over past Top Fuel champion Larry Dixon. The two also met in the Las Vegas final in April. In Topeka, Crampton made a pass of 3.738 seconds at 318.09 mph to beat Dixon’s 3.787-second run at 308.28 mph.

Crampton ran his record in two-wide finals to 4-0 (he lost in the final of the Four-Wide Nationals, but NHRA counts that as a semifinal finish).

“To get two wins so early in this sophomore season of mine is surreal,” Crampton said. “I technically lost in a final at the Four-Wide, but I won’t bring that up. But being undefeated in regular, two-lane racing in finals is pretty special. It says a lot about (crew chief) Aaron Brooks and this entire Lucas Oil team. They put the race car together perfectly for Aaron week in and week out.”

Crampton gave all the credit for his success to Brooks and the Lucas Oil team. Crampton should know because he worked on the Morgan Lucas Racing crew for several years.

“It’s really about the crew guys,” Crampton said. “They’re the ones who work so much and travel so long throughout the year to give me a good race car to go and do this. It feels good as a driver because it’s your name on the trophy, but I can’t thank my guys enough.”

Crampton started the day with a 3.762-second pass at 316.52 mph to outrun Kyle Wurtzel’s 3.909 seconds. Then in the second round, Crampton and Brooks lowered the track elapsed time record to 3.710 seconds in a thrilling win over Spencer Massey, who ran 3.731 seconds at 327.82 mph, and that run could have lowered the national record, as three cylinders were out close to the finish line.

“The driveshaft slowed down a lot compared to our other runs,” Crampton said. “If we could’ve kept all eight lit, it could’ve been a 3.70 or maybe a little better. Aaron Brooks deserves to tune the race car that runs the first 3.69. Hopefully, I’m the guy that gets to do that for him sooner or later.”

Brooks tuned Crampton’s winning car in the heat of Las Vegas, and he did it again in cooler conditions here. That helped Crampton move up to third in the Top Fuel standings, behind only Brown and Schumacher.

“Aaron Brooks is deadly this year,” Crampton said. “He’s got both sides of (the weather) figured out, we believe, and that makes everyone on the team extremely confident, including myself, that we can really contend for a championship this year.”