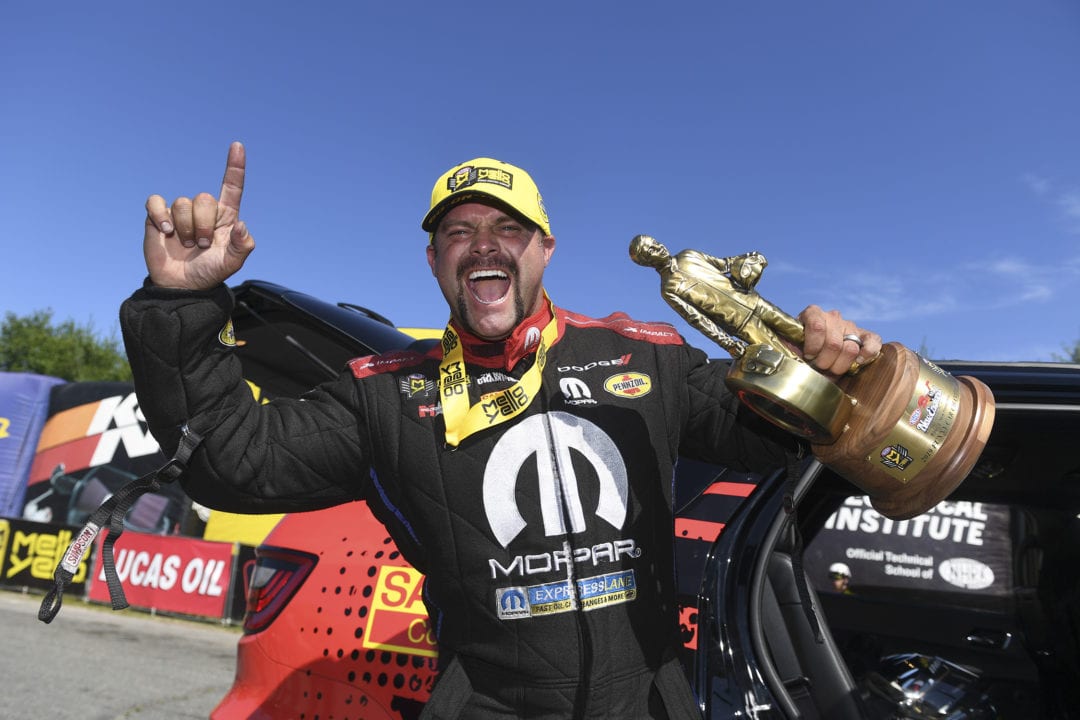 The pythons have to be close to 24 inches.

The new horseshoe mustache needs a little blonde in it, but otherwise we’re good to go – brother.

I mean, if we can’t get the Matt “Hulk” Hagan nickname going again, what are we even doing?

It started a handful of years ago as Hagan’s physique transformed into part linebacker, part Incredible Hulk, but the mustache has us now leaning towards the WWE icon (and yes, I know that’s wrestling references in back-to-back Return Roads. I apologize).

It also helps that Hagan leg dropped (okay, I’ll stop) everyone in his path on Sunday at New England Dragway, winning the NHRA New England Nationals for a third straight year.

Hagan and crew chief Dickie Venables were downright lethal during eliminations, going 3.958-seconds at 326.24 mph – the best of the weekend in the class – in the first round and finishing off the day with a 4.014 at 322.81 in the final round.

That was good enough to slip past Shawn Langdon, giving Hagan his first win since February and finally snapping a slump that included just one round win in the past six races.

“I don’t know (how we did it), but I want to keep coming back to this race track, this place has shown me love,” Hagan said in his high-energy top end interview. “This comes down to my crew chief (Dickie Venables) and the confidence he has. Our fans sitting through this heat and watching what we do is pretty awesome. We’re going to drink a little beer and a lot of Mello Yello with it. It feels good to win again.”

A first-round loss in Norwalk dropped Hagan to eighth in points, and while the win moved him back up to seventh, there’s plenty of work still to be done.

“We went down the track in qualifying and that created a lot of confidence in our team,” Hagan said. “Rolling into race day, I knew we had a great car and I was confident in it. “We kept lane choice every pass and that was big. I’m really excited we were able to get another win and we needed this to be our turning point this season. We needed to gather up some momentum and I feel like we’re making the right steps to move forward coming out of this race.”

He’s struggled mightily over the years in Denver – the next stop on the NHRA circuit – but Hagan hopes the considerable momentum built in Epping will have a lasting effect.

Hagan was non-committal on whether the mustache will last, but come on, it has to stay.

TORRENCE DOES IT AGAIN: We’ll have (much) more on this tomorrow, but has Steve Torrence done enough to win the ESPY? He can’t do much more, as he won for the seventh time in the past eight races with his Top Fuel triumph over Scott Palmer on Sunday.

But, wait, there’s a lot more.

Torrence has reached eight straight final rounds – only Tony Schumacher has done that in Top Fuel – won 13 of the past 19 races and claimed 26 wins in the last 56 events dating back to 2017.

He clinched a spot in the Countdown to the Champion – which doesn’t start for more than TWO MONTHS – during qualifying and won from the No. 9 position. When it counts, Torrence and his team deliver, summed up by a day that started with a 3.756 at 328.62 and ended with a 3.861 at 321.58 against Palmer. It shouldn’t be surprising at this point, but it should definitely be appreciated.

“I really, really want Scott Palmer to win a race, but we want to win them all, too,” Torrence said. “That was a great final round. That’s a really good group of guys and to see the progression we’ve both made, it’s pretty neat and really special for us. Without being cocky and just being confident, you carry the mindset of you want to go everywhere and win. With doing that, you don’t treat anywhere any differently. This is a fun place to come to and it’s a pretty neat part of the country.”

DEFLORIAN ENDS THE MMPS YEAR IN STYLE: This Mountain Motor Pro Stock in NHRA deal has gone well by almost every account.

For John DeFlorian, he’s still not quite sure this is real life.

It’s been an unreal year for the MMPS veteran, dating all the way back to his win at the U.S. Nationals during the MMPS exhibition.

That clearly went well for the whole class, which meant a four-race season in 2019. DeFlorian apparently thought he was the only one invited to the party, as he won the first race of the year in Houston and got the ultimate capper to the season with his victory in Epping.

DeFlorian qualified No. 1 and then went a weekend-best 6.297 at 224.28 in the final round against Johnny Pluchino, finishing off a dream that DeFlorian hopes never ends.

“I don’t even have words to put it in that would be enough,” DeFlorian told Competition Plus. “This is an amazing experience, an unbelievable experience. All I’ve ever wanted to do my entire life was race and go drag racing. To have this opportunity to come out here and get to do this and to be able to say that we wound up winning two NHRA Mountain Motor Pro Stock events, I pinch myself. I tell them all the time, ‘If I’m dreaming, don’t wake me up.

MORE OF THIS PLEASE: That was a fun back-and-forth from Shawn Langdon and Cruz Pedregon on the top end. Langdon put out a tweet after the first qualifying session and Pedregon took offense, which led to this:

Qualifying was cut short due to rain, but not before we saw fireworks at top end between @ShawnLangdon333 and @CruzPedregon. #NewEnglandNats

ONE RACER’S DREAM: This was extremely well done. J.R. Todd and his father, Mario, sat down to talk about J.R.’s dream to race and eventually become champion. There were all sorts of twists and turns, but Todd accomplished it and he credited the support of his family as a major reason why.

Mario Todd has believed in his son since day 1, even if he didn’t let 8-year-old @JRTodd373 on a dirt bike.

Since then, J.R. has traded in dirt bikes for something a bit faster. In partnership with @ToyotaRacing. pic.twitter.com/QdgnULlPbJ

AMERICA’S RACETRACK: Speaking of well done, videos don’t get much better than this. React104 – led by TAD driver Cory Michalek – put together this beauty on Summit Racing Equipment Motorsports Park after the recent NHRA race. America to the max!

WES BUCK SHOW: Drag Illustrated Founder and Editorial Director Wes Buck got plenty of opinions from his latest guest – three-time NRHA Pro Mod world champion Rickie Smith. Of course, that shouldn’t be a surprise to anyone, but Smith let his feelings fly when it came to the recent rule changes in the class. Don’t miss this one!

BOTTLECAP CHALLENGE: Okay, this was pretty good. Kudos to Top Fuel’s Jordan Vandergriff and the whole BVR team for this.

WORKING HARD: This was pretty wild watching it live, as Clay Millican’s Top Fuel team thrashed hard to get to the starting line for the semifinals. Scott Palmer ended up getting the win, and displayed some top-notch sportsmanship in the process.

When your guys drawl a fu Manchu on Wally it’s hard not to laugh!!! So proud of how hard my guys worked yesterday and the bad ass car @dickievenables, @stretchfc1 and @alex.conaway.1 put under me low of every round and keeping lane choice of every round was very 💪🏼

ESPY TIME FOR TORRENCE
Can this FINALLY be the year? Keep voting for Torrence. The winner is announced on Wednesday!

It’s Day ✌️ to vote for those CAPCO Boys!

WHICH WAY IS NEXT?
This is just too cool.

My sister @TraceyMillican made me this awesome sign post with the miles to every @nhra race to home (Drummonds TN) It’s so awesome!!! Reminds me of the sign post from my all time favorite TV Show MASH. #drummondstn3storesandacottongin #loveit pic.twitter.com/WSy3Pq1xNd

FINAL ROUND FEELINGS
It was great to see Scott Palmer advancing to his second career final round. The buzzsaw that is Torrence kept him from his first career victory, but this is a massive step in the right direction for Palmer and his team.

FAN FRIENDLY
New England Dragway is a special place when it comes to fan support and this year was no different, despite some challenging weather.

QUALIFYING WIN LIGHTS ARE BACK
And everyone cheered (and then placed a bet).

Back by popular demand: The win light returns to NHRA qualifying sessions!

TRAIN HORN FUN
This thing has been getting a workout this year.

FINAL WORD
It was a little shocking – and more than a little more disappointing – to see just 13 Top Fuel dragsters and 15 Funny Cars on the grounds at New England Dragway, especially when we’ve seen car counts in the 20-plus range twice last month in Norwalk and Chicago.

It’s such a cool part of the country and fans have craved NHRA drag racing since the race made its debut in 2013. They deserve more than 28 nitro cars on the premises, that’s for sure, especially when Pro Stock and Pro Stock Motorcycle aren’t there, either.

The glass half full part of me hopes that it’s just an anomaly, but hopefully there isn’t long-term damage when it comes to next year’s trip to Epping. It’s too good of a fanbase and a racing region to get anything less than spectacular racing. We got that over the weekend, but let’s hope the numbers are bigger in 2020.

Now, it’s off to Denver and the Western Swing!