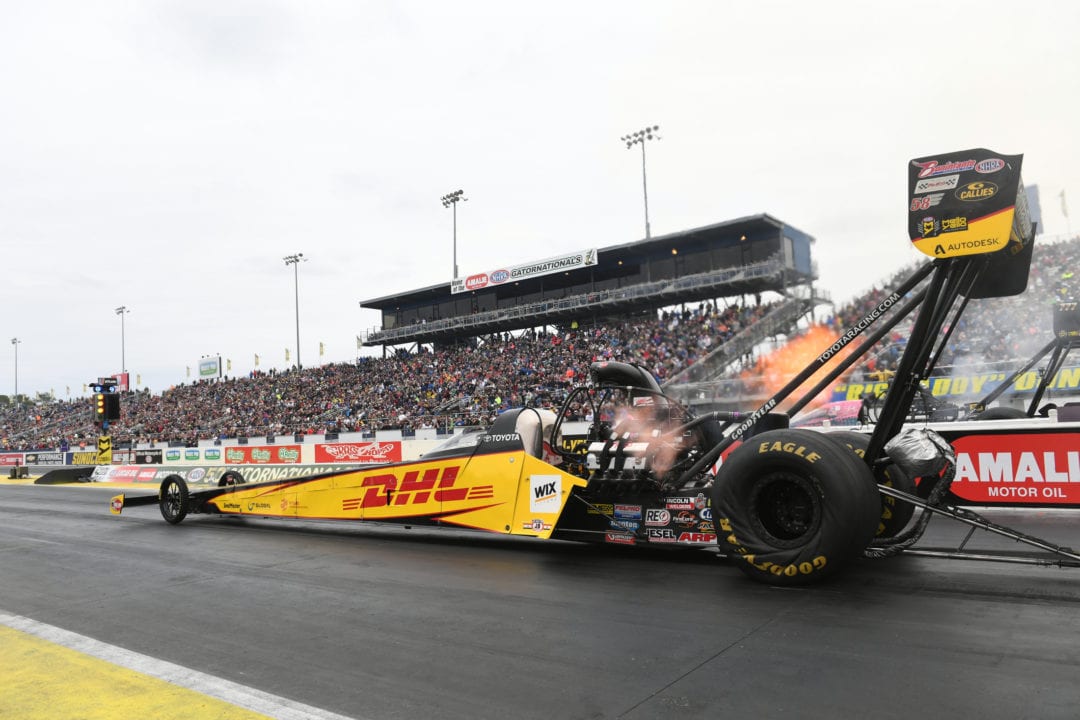 Richie Crampton certainly knows how to rise to the occasion, at least when it comes to racing at Gainesville Raceway.

This year had not gone to plan for the Aussie Top Fuel driver, losing in the first round at the first two races of 2019. But things changed last weekend in Gainesville, where Crampton is building a special kind of magic.

He won a year ago and the Kalitta Motorsports driver repeated the feat in 2019 in his DHL/Kalitta Air dragster, winning the 50th annual NHRA Gatornationals at Gainesville Raceway with a 3.768 at 323.89 mph to slip past Clay Millican.

It marks the first back-to-back Gatornationals winner in Top Fuel since Tony Schumacher pulled it off a decade ago, and for a second straight win to come at the 50th anniversary race wasn’t lost on Crampton.

“This is just a big race no matter what year you win it,” Crampton said. “There were not too many easy rounds this year. That goes to tell you how difficult this Top Fuel category is. I think this win is going to take a while to sink in. I’m so lucky to have a team that puts me in a position to win like this. I’m just focusing to be a dependable driver.”

In Gainesville, that doesn’t appear to be a problem for Crampton, who has nine career Top Fuel wins. But Crampton had not visited the winner’s circle since last year’s race in Gainesville, failing to make the Countdown in what amounted to a frustrating end to the year.

Crampton was able to recreate the magic again in front of a full house in Gainesville, thanks to a number of strong runs in the 3.70s on Sunday, but the next step is recreating that magic throughout the season.

On Sunday, though, Crampton only wanted to bask in the glow of winning one of the biggest races of the season. Winning last weekend was also big for the entire Kalitta team, as it marked the 25th anniversary of Connie and Scott Kalitta meeting in the final round. Crampton’s win proved to be a fitting tribute and he was thrilled to provide a special moment for his team owner.

“It’s definitely on my mind a lot,” Crampton said. “We had Colin Kalitta hanging out with us this weekend, Scott’s son. Leading into this race, I watched the videos of that particular final round, where Connie raced Scott in the final here. That history of Kalitta and this race track is pretty impressive and it’s nostalgic to watch Connie win here. And to have him put me in the winner’s circle today, kind of has a full circle feel to it.”

DOUBLE THE FUN FOR BUTNER: Just think if Bo Butner had actually retired. He was serious about it late last year – for about five minutes, anyway – but changing his mind has been one of the best decisions he’s made.

The Pro Stock points leader won for the second time in 2019, picking up the Gatornationals victory with a 6.505 at 212.29 in the final round against Alex Laughlin.

But that wasn’t the only good news for Butner. His fiancé, Randi Lyn Shipp, earned the win in Stock Eliminator at the Gatornationals, with the final gift coming in the form of his first grandchild. It all added up to quite the weekend for Butner, who has looked mighty impressive to open the 2019 Pro Stock season in his Jim Butner Auto Group Chevrolet Camaro.

“This will be the last interview I give prior to being a grandpa,” said an elated Butner. “The baby is coming this week when we get home, and I cannot wait. His name will be James Earl Butner V, and I’m calling him J5. I have a hat collection going for him already after winning Pomona, No. 1 qualifier in Phoenix, and now winning the Gatornationals – and Randi Lyn will have one to add to the collection now, too. It’s a very exciting time for us. Life is good.”

HIGHT IS RED-HOT TO OPEN 2019: You might say Robert Hight is motivated after falling in the championship duel against J.R. Todd during last year’s Countdown to the Championship.

Hight has been the No. 1 qualifier at the first three races, including Gainesville, becoming the first driver to do so since Kenny Bernstein did it 32 years ago. He’s finished the job at two of them, including Sunday in Gainesville when he went 3.867 at 331.61 to beat Tim Wilkerson in the final round.

Hight was downright lethal in eliminations, as Jimmy Prock tuned his Camaro flawlessly. He ran in the 3.80s during every round, beating his boss, John Force, for the third straight race as well. The challenge will be maintaining this torrid pace, but there’s no denying what Hight has done to open 2019.

“This is huge. This is a big one. The 50th, there will only be one of these. It seems like my boss, John Force, always wins the big races. We’ve had a 50th anniversary race for NHRA at Pomona in the summer and the big race with Winston Showdown Battle back in the day when he ran the Superman car. He just seems to win all the cool races but I finally got one,” Hight said. “This is a cool race to win and especially with everybody at this race. Anybody of ‘who’s who’ of drag racing was at this event. A lot of the people I’ve looked up to growing up as a kid were here and, now, I’m here holding the trophy and they’re watching me. It’s kind of a cool thing.”

HINES THE MAN TO STOP KRAWIEC’S STREAK: Leave to a teammate to spoil the party. Eddie Krawiec had three straight Gainesville wins heading into 2019 and six since 2010, but Andrew Hines had other ideas this weekend.

After not winning in 2018, which was Hines’ first winless season since his first full season in 2003, the five-time world champion didn’t waste any time this year, grabbing the early-season momentum at the historic race.

“The motorcycle I had this weekend was phenomenal,” Hines said. “It was tracking straight down the track and it responded to all of the changes. That made it so much easier to focus on going out there and racing, cutting good lights and not really worrying about what could happen the very next run.”

ROUND OF THE YEAR?: It would be hard to argue against the Pro Mod final round that featured Stevie “Fast” Jackson and Todd Tutterow. Jackson set the record on the pass (5.6644) – and LOST! Tutterow was .008 on the starting line and delivered a 5.662 at 251.86 to win the quickest side-by-side pass in Pro Mod history. Read more about Tutterow’s first career Pro Mod win here and watch the magic happen below.

It’s going to be close to impossible to find a round that tops this one.

MEYER CLAIMS FIRST GATORS WIN: Megan Meyer has done a lot in her successful Top Alcohol Dragster career. But one she had not done before 2019 was win the Gatornationals. Well, the ultra-talented driver picked the perfect time to win at Gainesville, going 5.201 at 285.35 in the final-round win against Mike Bucher.

It was fastest she’s ever been in her career after going 5.177 the two prior rounds for the quickest pass of the weekend. Oh yeah, it also made Meyer the winningest female in TAD history. Combined, that’s a pretty memorable weekend.

“I was stunned and speechless when we ran our top speed twice this weekend,” said Megan. “Each win is special, and this one has so much meaning behind it. We struggled a lot at this race last year, I couldn’t even get past first round, and we left the track devastated. But, we returned with our heads high and get to leave as the champion. I’m blessed to have the best group of guys on my team who work late nights and long hours to make sure our dragsters are the best when we arrive in the staging lanes.”

JOHNSON’S FC BODY GOES SKY-HIGH: Uh-oh. This is not the way Tommy Johnson Jr. wanted to start his Funny Car season. After blowing up a body in Phoenix, Johnson was in the midst of another explosion in Gainesville. Here’s hoping the team can put this behind them because Johnson certainly has a car capable of winning – especially if it keeps the body intact.

TAFC DRIVER GETS LOOSE, SLAMS WALL: This wasn’t the way Top Alcohol Funny Car driver DJ Cox wanted to make the highlight reel, but the good part was he walked away from major injuries after slamming hard into the wall.

GAINESVILLE WATCH PARTY: Drag Illustrated Founder and Editorial Director Wes Buck was on hand in Gainesville, talking to all of the standouts in Pro Mod. Head to our Facebook page to watch them all, including this awesome one with former outlaw star Jason Scruggs.

We see you Beau Layne! He gets back-to-back @MickeyThompsonT Top Fuel Harley WINS!

Big win tonight for this @AAASoCal team! The 50th @NHRA #Gatornats! Anybody of ‘whose who’ of drag racing was at this event. A lot of the people I’ve looked up to growing up as a kid were here and, now, I’m here holding the trophy and they’re watching me. Awesome job to my guys! pic.twitter.com/AD5S14eKmt

THANK YOU to all of you amazing #NHRA fans for making today a sellout at the 50th Annual Amalie Motor Oil #Gatornats at @GvilleDragRaces! pic.twitter.com/baS966oC3F

LEGEND OVERLOAD
The Gatornationals were filled with NHRA Legends to finish off its yearlong Legends Tour. Fans also got treated to the Unfinished Business event that pitted eight legendary drivers facing off against each other. Warren Johnson won that, adding another standout moment to the historic event.

All these legends in one place! Wow!

IMPRESSIVE DEBUT
Drew Skillman made his Factory Stock Showdown debut in Gainesville, and he went ahead and won the race. It was a stellar debut in a field that included more than 30 cars, an all-seven second qualifying field and some killer competition.

NHRA funny car driver Tommy Johnson Jr uninjured after exploding the Make-A-Wish Dodge body off the car alongside John Force, who was having his own troubles as he crossed the center line during the final round of qualifying for the 50th NHRA Gatornationals in Gainesville. This is the third body destroying explosion that TJ has suffered through three races… #incaseyourecounting #donnotgonnabehappy 😡

WELCOME TO THE PARTY
Jianna Salinas made her Pro Stock Motorcycle debut, adding another exciting young prospect to the NHRA ranks.

ROUGH WEEKEND FOR BARTON
Factory Stock Showdown driver David Barton got loose during the first round of eliminations, hitting the wall in his Camaro.

Not the weekend we were looking for. What can I say, it seems we are trying to hard to get it done without giving us self a honest opportunity to do it right.
I will give it some thought how to proceed, in the mean time a big thank you to all our Fans You guys are awesome @NHRA pic.twitter.com/3RtUQb2RMD

FINAL WORD
Gainesville never disappoints, but, man, was this one special. Every class delivered something noteworthy, the fans showed out in a major way and we had the perfect throwback party with Unfinished Business. But, seriously, how great is the NHRA Pro Mod class? It stole the show in my eyes this weekend and that was a high bar considering the action we saw all three days. The spectacle that is four-wide racing comes at us next, but not before we get all sorts of fireworks and insanity this weekend in Valdosta for Donald Long’s Sweet 16 event.