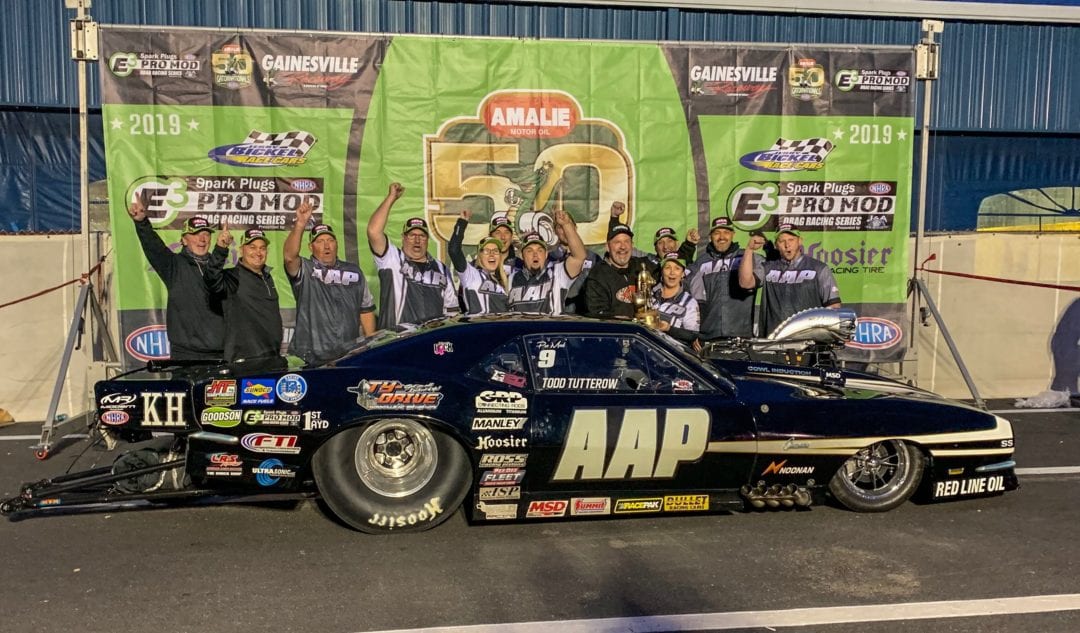 The calls and texts started flooding in Sunday evening and they haven’t stopped.

They went well past 100, kept going through 200 and the congratulations continue to roll in. For Todd Tutterow, winning the historic 50th annual NHRA Gatornationals in Pro Mod elicited an incredible response and he has the hundreds of message to prove it.

“I got calls from people I haven’t heard from in a long time,” Tutterow joked.

After a weekend like Tutterow had in Gainesville, it seems everyone wants to rub elbows with King Tutt. It’s understandable, too, after a mesmerizing final round against Stevie “Fast” Jackson that featured a world-record pass, a pair of runs in the 5.60s and a holeshot victory.

Tutterow needed every bit of his incredible .008 reaction time against Jackson, who ran a record pass of 5.643 at 253.95 mph in the final round.

Tutterow was just as brilliant in that department, making the third-quickest run in the history of NHRA Pro Mod with his 5.662 at 251.86 in his Al-Anabi Performance Chevrolet Camaro.

It translated into Tutterow holding off Jackson at the finish line, giving him his first NHRA Pro Mod victory – on a grand stage, no less – and one of the biggest wins in his storied career. 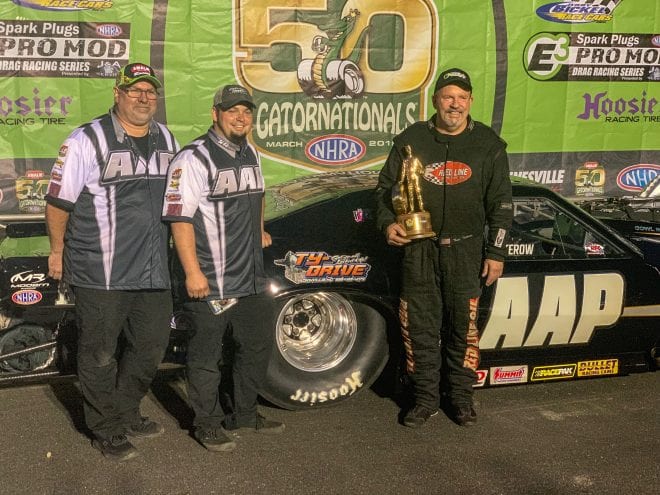 “It’s been pretty exciting. I’ve won a lot of races and a lot of championships before, but this is a pretty big feather in my cap,” Tutterow said. “It’s been every exciting for all of us. Getting that first win and having it come at the Gatornationals, it’s pretty big.”

Tutterow received the special gold-plated Wally to commemorate the 50th Gatornationals and then got emotional in his post-race speech on Fox Sports 1, a sign of just how much the win meant to one of the Pro Mod pioneers.

He qualified second to Jackson with a 5.671 at 250.64 in what was the quickest qualifying field in NHRA Pro Mod history, and was simply lethal during eliminations.

Tutterow never ran slower than 5.684, knocking off defending world champion Mike Janis in the opening round with a 5.671 and beating Chad Green a round later. He went a stunning 5.665 at 251.77 to knock of Marc Caruso in the semifinals, setting up an epic duel with Jackson, who went 5.653 in his semifinal victory.

Paired together in a must-see final round, Tutterow and Jackson delivered what might become the round of the year in NHRA racing. Tutterow knew he had a car capable of a big number, but he also realized he had to be outstanding on the tree in case Jackson threw up another impressive blast. 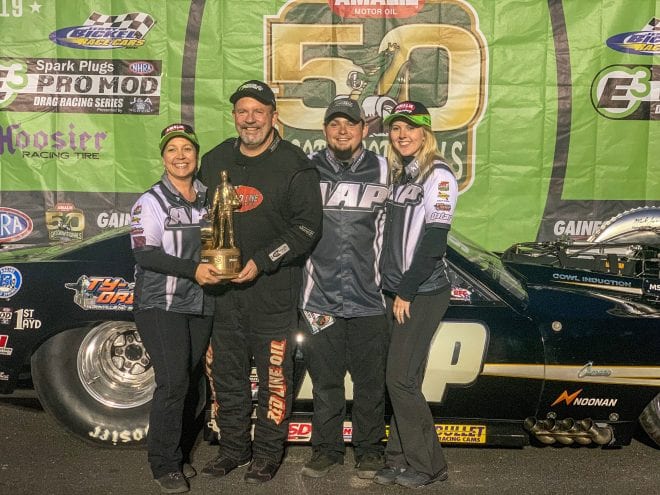 “I knew I had to be on top of my game and do the best that I could,” Tutterow said. “This deal is so tight if you break anything, you’re basically done. But I knew it was going to be close. We had a real good gameplan put together and we knew the direction we wanted to go.”

That direction was hatched during a successful winter of racing in the Arabian Drag Racing League in Qatar. Tutterow made nearly 100 runs overseas, gathering valuable data en route to winning the ADRL championship.

It also allowed Tutterow to start the NHRA Pro Mod season with plenty of confidence and that translated to plenty of success in Gainesville, which he also hopes gives him momentum for the rest of 2019.

“All the testing we did over there allowed us to try a lot of different things and we could hit the ground running here,” Tutterow said. “If you get that rhythm going and get a win the first part of the season, it really puts you at an advantage.”

No matter what happens the rest of 2019, it will be hard to top what Tutterow experienced in Gainesville, and winning in the fashion he did.

With 30 ultra-talented cars in the class in Gainesville, Tutterow knocked off a remarkable list of names. Making four straight runs in the 5.60s added to the significance of the victory, giving Tutterow a weekend he will never forget.

“Seeing that win light come on, I was just floored,” Tutterow said. “All the hundreds of messages and text, it’s just really amazing. It was big for us and just exciting to see it all come together.”