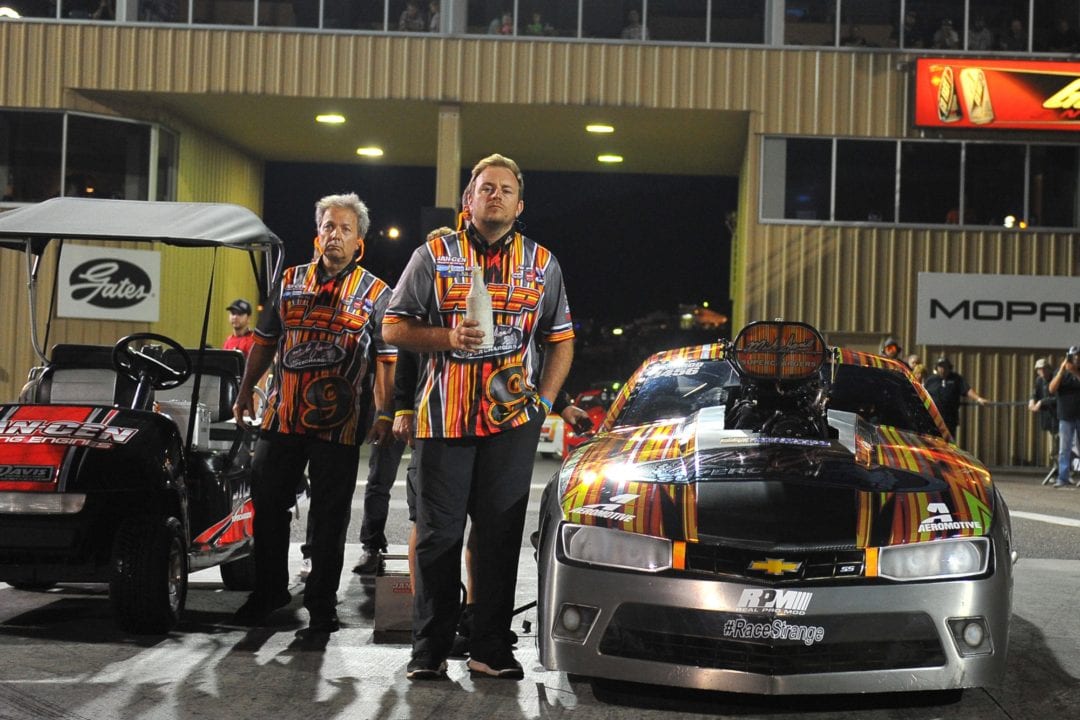 The trek from Lancaster, N.Y. to Bandimere Speedway just outside of Denver checks in at roughly 1,500 miles.

For Pro Mod standout Mike Janis, that’s a drop in the bucket to the distance he would be willing to travel to attend the DRAG ILLUSTRATED World Series of Pro Mod for a second straight year.

Janis is plenty excited after his experience a year ago at the inaugural $100,000-to-win event, as well as his impressive start to the 2018 NHRA Pro Mod season.

The veteran posted his first win since 2015 – a year he finished second in points – with his victory last weekend at Virginia Motorsports Park, the facility where Janis also earned his first career Pro Mod win on the IHRA circuit in 2001.

It gave him the points lead for the first time since 2015, putting Janis in position to compete for plenty of spoils this season.

That obviously includes the NHRA Pro Mod championship, but a strong start to open 2018, coming off a championship over the winter racing in Qatar, puts Janis on the list of favorites to win the WSOPM on Thunder Mountain.

His weekend at Bandimere Speedway was made a year ago when Janis upset Stevie “Fast” Jackson in their highly-anticipated first-round matchup, which had the added layer of Janis’ partnership with Al-Anabi Performance facing off with the Bahrain 1 Racing-backed Jackson.

Looking back, it might have been the round win that set everything in motion. Janis ran well to close 2017 on the NHRA Pro Mod side, reaching his only semifinal of the year in Charlotte, and followed it with wins and a championship overseas.

More success has come Janis’ way in 2018, something he hopes can continue at Bandimere Speedway this year.

“Having that spotlight on the Pro Mod class was great, and there were so many people supporting us and pulling for us,” Janis said. “After that win against Stevie, seeing all the texts and messages, that was pretty cool. We’ve been running well all year, and running well since the end of last year, we just haven’t been able to seal the deal. We put it all together (in Virginia) and hopefully we can keep that going.”

Janis had never raced at Bandimere Speedway before the last season, but he wasn’t able to test in the days leading up to the race. Now, he feels like he has a solid grasp on the track and racing at altitude.

Then again, with a who’s-who list of talent coming for the WSOPM, Janis isn’t sure that gives him any sort of advantage.

“We didn’t launch our car until that first day, so we were at a major disadvantage,” Janis said. “We’ll be going into it now with a better understanding of what we need to do to be successful. But, then again, so does everybody else.”

Nobody, though, is running as well as Janis is right now, something he is confident his team can maintain over the next few months.

He finishes up a busy three-week stretch with NHRA races in Bristol and Norwalk before a well-deserved break. When that mini-vacation ends, all his focus returns to trying to collect that $100,00 check at the WSOPM.

For Janis, that prize money is motivation enough, but seeing the passion and excitement surrounding the event is an added factor.

He said it starts with Drag Illustrated Founder and Editorial Director Wes Buck and trickles on down, but it’s something that causes equal parts enjoyment and motivation for Janis heading to Thunder Mountain.

“Wes lives and breathes the sport, and just has so much passion,” Janis said. “Everyone involved does an amazing job promoting it. It’s the best of the best. It’s a $100,000 race. How does it get any bigger than that? When has someone does that for the Pro Mod class? Running for that kind of money at a race with that much prestige, it’s a big deal. We’re going to do everything in our power to try to get that money.”