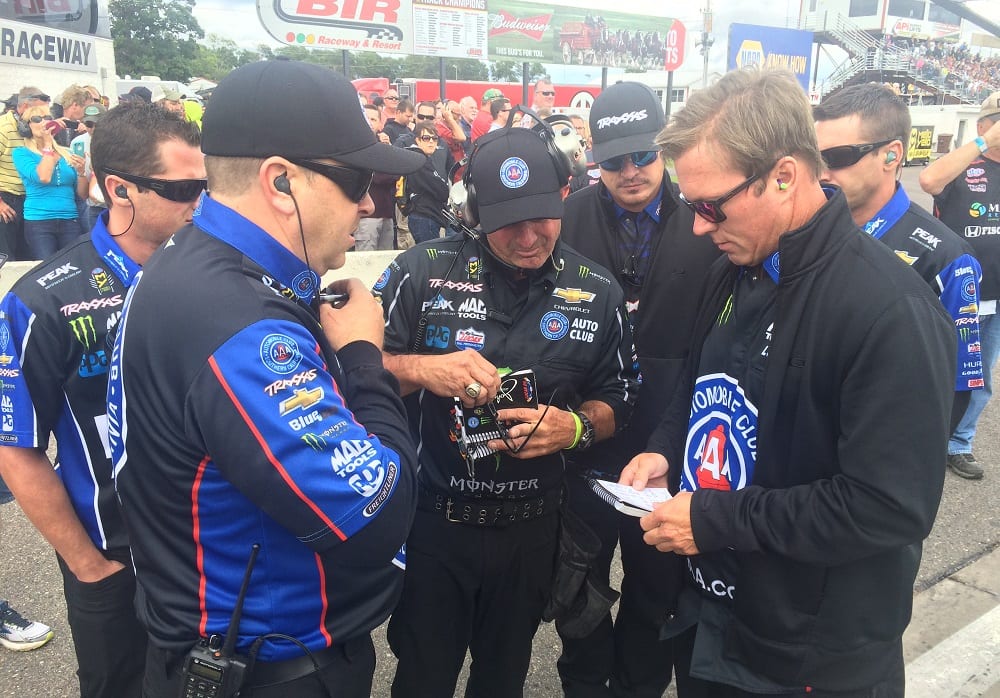 At every NHRA Mello Yello Drag Racing Series event there are dozens of professionals that travel across the country representing the NHRA Safety Safari working sun up to sun down to give racers the best track conditions so they can thrill the fans in person and watching on the FOX broadcast. In addition to these hard-working men and women there is another group that works sometimes side-by-side with the NHRA to evaluate the racing surface for individual teams.

Inside this smaller group one man stands out as the most active, most knowledgeable, and some would say hardest working. His name is Lanny Miglizzi, track specialist for John Force Racing, and he would deny every element of the previous sentence. Miglizzi is unassuming, shy, and without a doubt one of the most sought after fixtures on the starting line. Surprisingly, thanks to an almost snap judgement in the late 1980s, Miglizzi might never have had the pleasure of being coated head-to-toe in rubber from a burnout. 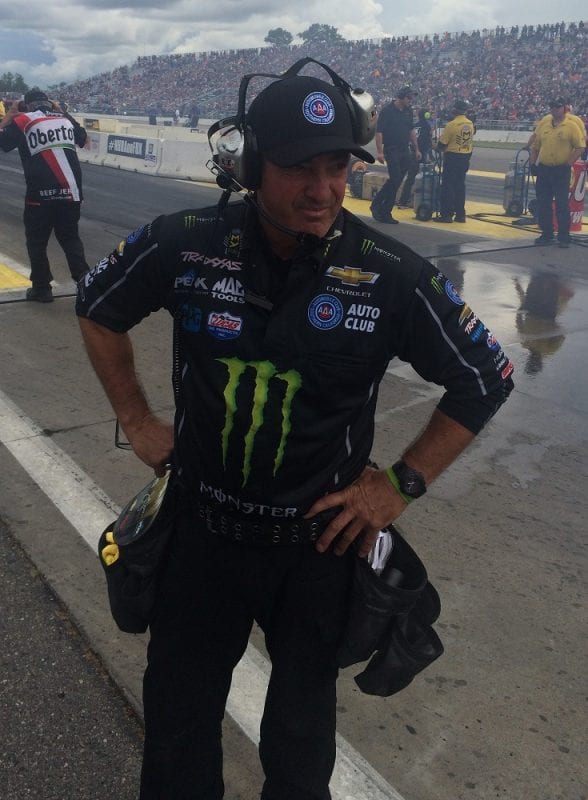 For most of his early life the JFR track specialist had a passion for race cars, but ironically he was on a path to become the next AJ Foyt or Bobby Rahal – not the next John Force. A few years after the youngster started walking he was strapped into a go-kart and he spent just about all his free time making laps. He moved his way up the ranks racing Formula Fords for a while and eventually racing at the Pro Mazda level. It was a fateful day in preparation for the Toyota Grand Prix that Miglizzi’s life went from keeping his race car tight in a corner at 140 mph to advising teams on how to keep a Funny Car or Top Fuel dragster hooked up at 330.

“I was physically in a go-kart racing before I was five years old. I worked my way up to the Pro Mazda level and I raced Laguna Seca and Riverside,” says Miglizzi. “I got to the point where I was going to race the Long Beach Grand Prix the day before the Indy Cars. That was all I ever wanted to do was road race open wheel. I root on Graham Rahal every day.”

It is a very familiar tale of expenses getting in the way of skill and passion. Miglizzi was smart enough to know that as much as he loved racing he wasn’t going to send himself to the poor house.

“It got to the point where the rental for the car was $4,500 and another $1,000 for two sets of tires. The problem was the other guys had their own cars and I had the school car that got beat up every day and it had a $15,000 deductible,” explains Miglizzi. “Three days before Long Beach I am drifting around the turn at Riverside on the road course at about 145 mph thinking about what happens if someone touches wheels and I have to pay L&T Clutches twenty grand for a new race car. I pulled into the pits and said I am not racing next week. That was it. I went to work full-time at L&T Clutches for the next 18-years.”

Over the years Miglizzi kept in touch with racing through the clutch business and his expertise kept him in high demand. The attention to detail and consistency that is required to machine clutch discs became part of his DNA just like the passion for racing. When the opportunity presented itself to get back on the track the former road racer became a track expert and he has never looked back. In fact no one looks forward to being at the track more than Miglizzi. As soon as he gets to the race track he is examining, measuring, and recording every nook and cranny of the racing surface to report back to the brain-trust of JFR crew chiefs and assistance crew chiefs.

“I get to the track a couple of days before the sportsmen. The first thing I am going to look at is to see how well it was 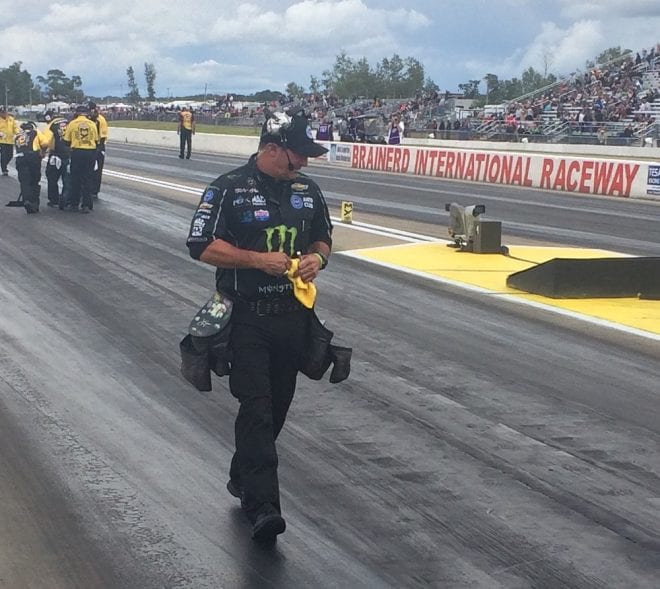 scraped. If it was a shallow or deep scrape. The deeper the scrape the better, most of the time then I look at how well they prepped the track. Usually it is A-plus, but if they have had weather problems they may have not had enough time,” says Miglizzi. “If it is a textured track and it got a light scrape then the textured lines might be filled in. If it got a deep scrape and it is machine lined then that texture is going to be there for a while until it fills in with rubber. Just for an example at Brainerd the right lane was more textured than the left lane. They did a good scrape but you still see more texture in the right lane than the left lane. That is half of the battle as to why so few cars went down the right lane in Q1 and Q2.”

This kind of evaluation is critical as an event progresses and Miglizzi uses a suite of tools to give his team every advantage. He is not the only track specialist on tour but observers can see him continuously talking with other crew chiefs, track workers, other driver or riders throughout the day. They are swapping tips, observations and opinions. All this information is recorded in a spiral notebook that Miglizzi never puts down. It is attached to his hip along with about 40 pounds of equipment he uses to make constant measurements of track conditions. The job has stayed the same, but the tools have definitely improved his abilities.

“I used to lay on the ground to do my initial evaluation of the depth of rubber. You would know when the track was 80-degrees or 120-degrees when you are laying on it. I actually switched to the creeper at an event it was raining all the time and the ground was wet. Now I use it all the time and I can roll around and it actually shows me how good the bond is on the track. If the creeper is pulling up rubber when I am rolling then I know the rubber doesn’t have a very good bond,” says Miglizzi.

“I also use Traxxas radio controlled cars to check for humps and dips. You don’t run them fast you use them as a marker. The process has been sped up by hours now. I think Bernie Fedderly was the first crew chief to use a temperature gun. We used to just put our hand on the track and see if it was cold or hot. One day Bernie has a temp gun and everyone was like how dang simple was that. Super smart,” adds Miglizzi.

Track evaluation is not a perfect science and Mother Nature often throws a wrench into everyone’s plans. Miglizzi does pride himself on getting the most accurate reads on the track and passing that information on to the crew chiefs. Seeing a JFR Camaro Funny Car blast down the track in 3.8-seconds is always nice but most of the time the conditions don’t cooperate to give teams that option.

“The most satisfying part of my job is being correct with my opinions. Sometimes it might not be a successful run but thank goodness I was correct in my evaluation. Out there we don’t even want to be one gram off. One little washer could be a gram and a half. Blue sky and five minutes of clouds that is three grams or a cloudy day and five minutes of blue sky is a couple three grams so I can’t imagine being one gram off. Being correct is the best thing,” sums up Miglizzi. 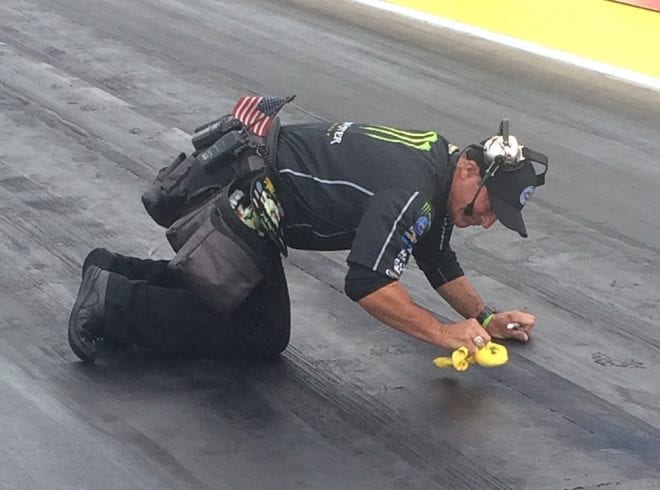 The veteran track expert does have some behind the wheel drag racing experience. A few years ago he went through Frank Hawley’s Drag Racing School since they were an L&T Clutch customer. After a couple of aborted runs Hawley suggested Miglizzi let loose and run his Funny Car out to half-track. The experience was both eye-opening for the clutch expert and left a forever memory for Miglizzi’s to remember when he is passing along his track judgements.

“On the third run Hawley told me to just drive it to 400-feet so I did. It felt like the stoutest roller coaster that I have ever experienced. I was shocked at how hard it was pulling. I thought I was on a rocket but we looked at the video and it looks like I left in third gear. It was pitifully slow. I realized how awesome all the drivers are because it felt like a rocket and it looked like a slug,” confesses Miglizzi.