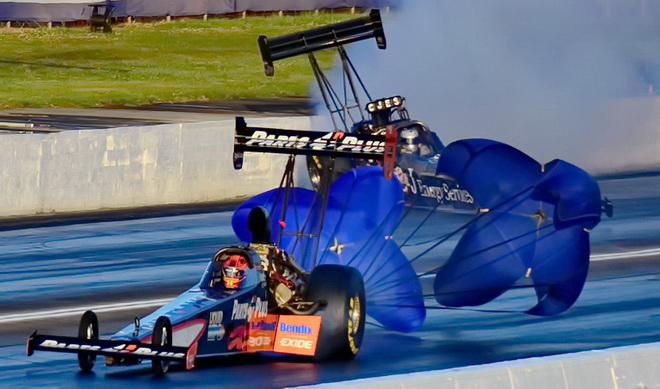 NHRA officials postponed eliminations for the Summit Racing Equipment NHRA Southern Nationals at Atlanta Dragway until Monday, following a day of lengthy rain delays. Racing will resume at 9 a.m. on Monday for the Lucas Oil Drag Racing Series and will be followed by the continuation of racing in the Mello Yello Drag Racing Series at 10 a.m.

Persistent rain showers in the area delayed the start of the race for more than eight hours. An attempt was made to start the race at approximately 7:20 p.m. and five pairs of Top Fuel cars competed before the race was postponed.

“Track conditions were challenging after the day long rain in the area,” said Graham Light, NHRA senior vice president, racing operations. “The NHRA Safety Safari worked hard to bring racing conditions around, but we decided to postpone until tomorrow. We will scrape the starting line overnight like we do prior to the event and prepare it for racing on Monday.”