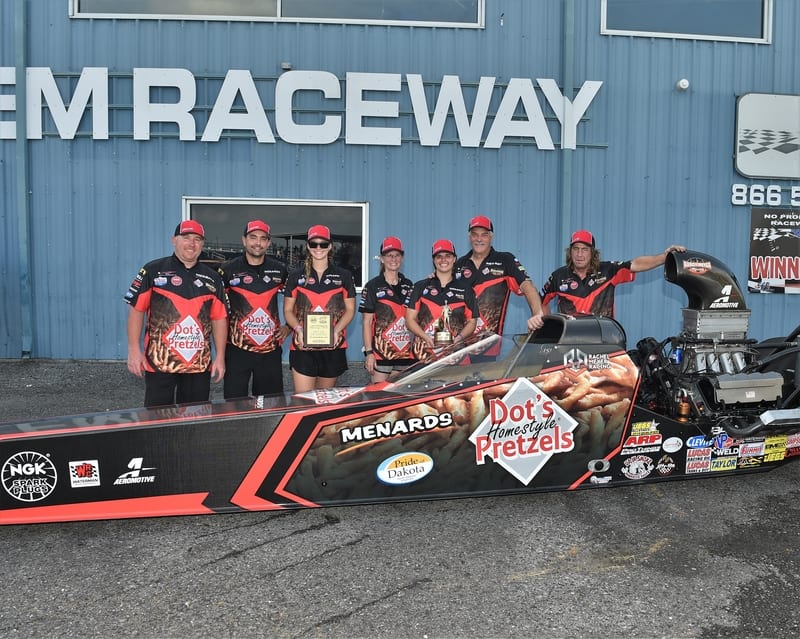 Rachel Meyer landed her second final round of the 2019 season at the Nitro on the Bayou, NHRA Central Regional event held at No Problem Raceway in Belle Rose, Louisiana. The Randy Meyer Racing Team previously won this event with driver Megan Meyer in 2017, starting the streak of having a female win the race in the Top Alcohol Dragster category.

Rachel began the weekend from the No. 1 qualifying position, running a 5.30 at 272 mph in the final session on Friday night. With only 5 cars entered for the 8-car field, Rachel had a bye run in round one of eliminations, while Megan in the NGK Spark Plugs dragster, who qualified no. 2 with a 5.35 ET, had to face Terry Schmidt. Terry had issues with the car after the burnout, and was pushed off the track, leaving Megan with a bye run as well. Both ran a 5.31 to move on.

Rachel’s Dot’s Homestyle Pretzels dragster went on to take the second-round win against Dean Dubbin with a 5.30 ET, placing her in the final round against Megan, who had a single run in the semi-finals and chose to not make the pass.

“I was worried we might struggle to get the car down the track because of the heat to beat Megan in the final round,” said Rachel. “Three of the five passes I made this weekend I had to pedal to even get down the track, but we still ran some great numbers and we were the quickest and fastest dragster in the field. It was exciting having the car make 5.30-5.31 passes three times in a row.”

This is the second time this year that the Meyer sisters have met up in the finals, but this time it was Rachel winning in another close race. Megan left the line first, but Rachel pulled ahead for the victory with only three feet to spare, running a 5.38 ET to Megan’s 5.42 ET.

“Beating Megan by .008 at the finish line was the most memorable experience I had this weekend,” Rachel claimed. “I’m happy she made it to the finals, and I’m not going to lie, I was nervous, worn out, exhausted, and ready to give up going into the final round. Suiting up to get in the car, making a pass, coming back and working on the car, and repeating it all weekend in the extreme heat had worn me out. While I was setting the clutch before the finals all I could think about was how Megan was probably going to beat me on a hole shot, but I really wanted to get the win. I cleared my head before I staged the car and cut a good enough light to get around her at the top end and get the win.

“She’s beat me more times than I can count since we started racing Junior Dragsters, so it was nice to come out on the winning side. In the end our family won as a team and it’s always great to get both cars to the finals. All of the No Problem Raceway crew did an awesome job this weekend putting up with the weather. I feel like next year I will have more fun if we get to race there early in the year when it is cooler.”

Rachel Meyer will race at her third regional race of the season in Indianapolis on July 5-7th at Lucas Oil Raceway with her Dot’s teammate Julie Nataas. Megan will compete at the Topeka regional race on July 25-27th with Rachel.