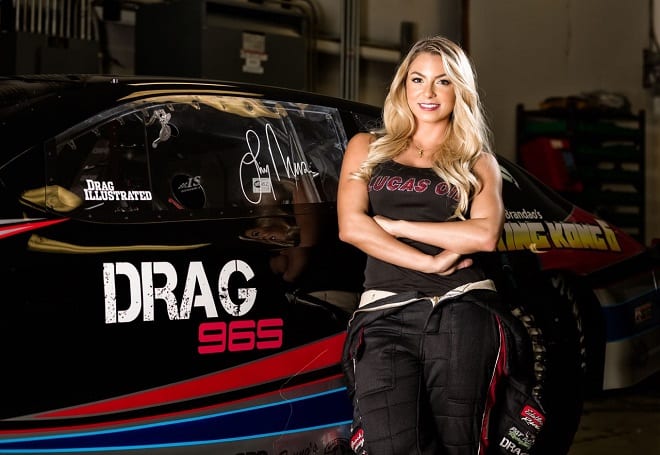 With continued support from Lucas Oil, Edelbrock, and Drag965, the second-generation racer has all the tools to compete for her first championship.

“I’m so proud to have each of our longtime sponsors returning for the 2016 season,” Musi said. “Their loyalty and support means the world to me, and I plan on carrying our success from the end of last year right over into the start of this year.”

The 25-year-old resident of Mooresville, North Carolina, will return to action with her Jerry Bickel-built 2015 Dodge Dart owned by Frank Brandao. The slick machine has been upgraded with a brand new Pat Musi Racing Engines 942 cubic-inch engine that showed great potential in preseason testing.

“We’re already running speeds in testing that are just as fast as we saw at the end of last year,” Musi said. “Speed comes from horsepower, so this new engine is already showing us what it’s capable of. We’re going to keep refining it and working on breaking into the 3.60s and staying there.”

The new engine was also fitted with a brand new set of zoomie-style headers from ProFabrication Racing Exhaust Systems. The leaders in high performance racing exhaust technology, ProFabrication has formed a partnership with Pat Musi Racing Engines to become the engine shop’s official supplier of headers and header kits.

“Our customers running Pat Musi engines also had a lot of success racing this winter in Qatar and they were able to learn some things that really helped move our research and development forward. Mahana al Naemi, tuned by Rickie Smith, set the new quarter mile elapsed time record for a nitrous Pro Mod at 5.753 seconds and Khalid al Balooshi ran 5.773 with a brand new engine so a big congrats goes out to both of those teams,” Musi said. “Their knowledge, along with the R&D help from Tommy Franklin and tuning from Patrick Barnhill, has us in a great position to start the year. I couldn’t be more excited for what’s in store this season.”