The baddest outlaws of the Southwest are finally going to reunite their battle as the Texas Outlaw Pro Modifieds will take on the Outlaw Fuel Altereds in a special head-to-head, two-day event July 5-6, at North Star Dragway in Denton, Texas.

This event will be held in conjunction with the North Star Dragway Anniversary Celebration and 4th of July weekend and will also feature the Southwest Heritage Racing Association (SHRA) as well as Top Gas and Pro Mod Motorcycles, with more feature attractions to be announced.

Almost a decade ago, when a 4.10 to 4.20 eighth-mile pass was good for the top spot, the Texas Outlaw Pro Mods and Outlaw Fuel Altereds lined up side by side at Lone Star Raceway Park in Sealy, Texas. This rivalry ignited a friendly battle between the associations as to who was the baddest outlaw of all. Frankie “Mad Man” Taylor and his Pro Mod took home the win in both 2002 and 2003 over Mitch King and Larry Reep in their Fuel Altereds. Unfortunately, the event did not continue in 2004 and until now, no one was sure if it would ever return.

Gene Nicodemus, owner of North Star Dragway, has stepped up bring the rivalry back to reality. The level of performance these series are now showcasing will literally bring the best of the best to this event in a shootout to see who is the top dog of the Southwest outlaw racing scene. 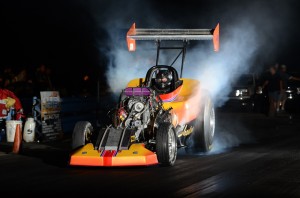 “TOPMA and OFAA put on a great show and have for years, we are lucky to have such attractions here in our backyard. I want to bring our fans the best show we can possibly have, so we are lining the two top attractions up side by side. It’s a show that can be found nowhere else besides North Star Dragway,” Nicodemus said.

“We are going to allow spectators to camp for free at the track and offer discounted tickets online, plus much, much more to be announced soon.  This will be the first annual Pro Mod vs. Fuel Altered Showdown at NSD every 4th of July weekend to celebrate our anniversary, so mark your calendars now and we’ll see you at the show.”

Gaylen Smith (above), president of the Texas Outlaw Pro Modified Association (TOPMA), and the rest of the Pro Mod field is ready for the challenge to take on Outlaw Fuel Altered Association (OFAA) President Bobby Marriott and the rest of the Fuel Altered teams. The associations even came up with terms to describe each other, as the Pro Mod guys call the Altereds “buggies” and the Altered racers call the Pro Mods “Slo Mods,” saying “real race cars don’t have doors.”

It’s all in good fun now, but when they line up against each other in July it will be for keeps.

For more information and to pre-purchase discounted tickets, visit www.northstardragway.com.