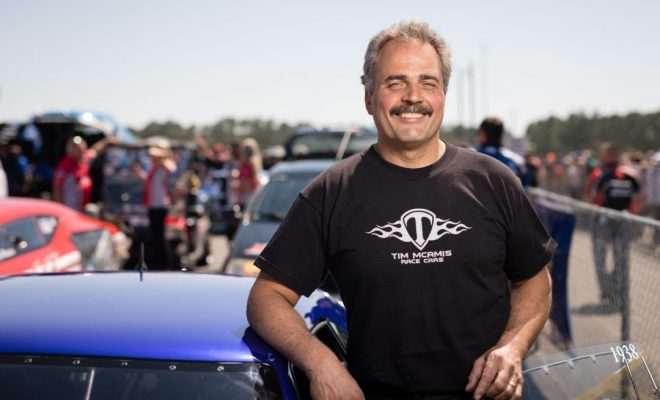 Eric Latino discovered last year, when DRAG ILLUSTRATED Founder and Editorial Director Wes Buck puts on an event, he doesn’t play. The World Series of Pro Mod, hosted at Bandimere Speedway for the second consecutive year, is Aug. 10-11 and the Canadian Pro Mod ace looks to build on his round win there from last year.

Latino has been re-invited to the second running of the event, as have all the racers from last year. More than just a race, the DRAG ILLUSTRATED World Series of Pro Mod is a gathering of the best of the best in Pro Mod racing. So it goes without saying (but I’m going to say it anyway), getting invited is a big deal.

“It’s one thing to tell somebody ‘Hey man, I want you to come to my race,’” Latino said Monday during a phone call. “But he handed me an envelope with my name typed and printed on there, so he already had plans to have me there before he even came to Charlotte.

“That was pretty exciting because I didn’t realize…he was going to have the same 15 invited out. I thought he might pick a whole new crew just to change things up, so I was pretty excited to be invited again.”

With upwards of 30 drivers regularly attempting to qualify for one of 16 spots at the 12 NHRA Pro Mod races, there is no shortage of doorslammer vets ready and willing to compete against the best of the best. Latino said Buck explained why he and his fellow drivers were chosen for the second running.

“What Wes [Buck] told me is, that he’d literally rather not have the race than not have the original guys back out for the second-running; that our participation in the inaugural event meant that much to him,” Latino said. “And that means a lot to me and my whole team. We can’t wait.

Several things set the WSOPM apart from other races, one of the biggest being the $100,000 paycheck going to the winner and a pat on the back and a handshake to the 15 losers. Another unique part of the race last year? No times. That’s right. The biggest Pro Mod race on the planet and no one knew what their competition ran. For 2018, Buck has announced that while all testing and scheduled “shakedown” runs will be run with the scoreboards dark, starting with the first round of eliminations everyone will know where they stand.

“Last year, there were a lot of five-second cars there, and that’s never been done before by a doorslammer at Bandimere  – so it’s a big deal,” explained Latino. “I’m told there were over 20 five-second runs last year, and I think we can all agree that it’s a bummer that none of those impressive numbers ever popped up on the scoreboards. So, I’m 100-percent on board with the change for 2018, and turning the scoreboards on starting with eliminations.

“It’ll be super exciting and all of us will be talking in the pits, trying to figure out what we think everyone else is running before that first round,” he continued. “I think this is the perfect arrangement. It’ll keep the suspense and the tension that we had before the first round last year.”

A year after the inaugural race, what has Eric learned about the event and the track?

“We definitely have a better understanding of what we need to do,” he said. “We didn’t have a chance to test so what we did is, we ran really well during those three shakedowns that we had. In the first round against Danny Rowe, the car worked amazing. Second round, I think I was up against (Steve) Matusek and we made a few changes and it didn’t work out.

“I can tell you we definitely learned a whole bunch about racing on ‘Thunder Mountain’ when there’s no oxygen. And the competition was great. I think there’s a lot of parity. Last year’s competition, from what I got out of it afterwards, was running all within a hundredth of each other, so that was pretty good.”

But when it comes down to it, no check, no trophy, no fan worship takes the place of being invited to the World Series of Pro Mod as one of the best racers in the world. Latino, incredibly busy with his “real” job, is skipping the NHRA Mello Yello Series event at Heartland Park near Topeka, Kans., this weekend due to his workload.

With a race scheduled for the return of the NHRA Nationals to Virginia Motorsports Park in Richmond and a new car being received in June, it’s a busy time for Latino. But he’s making sure his schedule is open in mid-August.

“I love that race, I love the competition,” he said. “Anything that Wes asks me to participate in, I’m there to support him. He’s a great guy, I love his whole deal and everything about him and his whole team.

“Anytime we have an option to participate at anything he puts together, we know it’s going to be a world-class deal.”

The World Series of Pro Mod Presented by Drag Illustrated is Aug. 10-11 at Bandimere Speedway near Denver. For more information, visit www.WorldSeriesOfProMod.com.