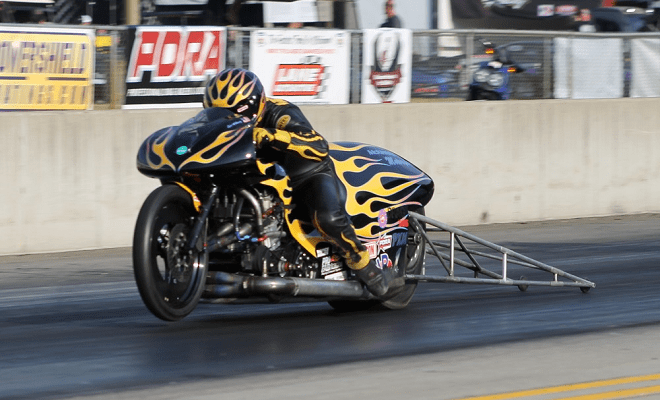 As the Professional Drag Racers Association (PDRA) heads into the second half of its 2016 tour, the championship points battles in two of the premier professional classes are tightening up. Defending NAS Racing Pro Extreme world champion Jason Scruggs currently leads Brandon Snider by 51 points, while a mere 14 points separate Drag 965 Pro Extreme Motorcycle frontrunners Eric McKinney (pictured above) and Chuck Wilburn as the PDRA rolls into Tennesee for the 3rd annual PDRA Memphis Drags, August 11-13, at Memphis International Raceway.

Scruggs and Snider have been fighting back and forth since the first PDRA race of the year in Tulsa, where Snider scored the event victory over Scruggs in the final round. Two races later, Scruggs and his ScruggsFarm.com 1969 Camaro had a commanding lead after taking runner-up at Rockingham and winning Texas. Snider tightened things up by 101 points with his runner-up finish at Michigan, then added another 201 points at the most recent race in Maryland. Scruggs enters the weekend as the defending event champion.

In the PDRA’s lone two-wheeled class, two-time PDRA Pro Extreme Motorcycle world champion Eric McKinney holds a 14-point lead over Chuck Wilburn. The two have been locked in close since the second race of the season and neither rider shows any signs of letting up. McKinney is chasing his third series championship on the strength of runner-up finishes at Tulsa and Michigan and a win at the last race in Maryland, where a field of 17 bikes showed up to race. Wilburn won the PDRA Texas Nationals, runnered-up at Rockingham, and has a pair of semifinal finishes to his name in 2016.

The cutthroat competitors of the Switzer Dynamics Pro Nitrous presented by MoTeC class are sure to continue their flame-throwing, smack-talking antics at the Memphis Drags. Points leader and two-time winner this season, Jay Cox, will be seeking redemption after sustaining a top-end crash at the PDRA North-South Shootout in Maryland last month. Maryland and Tulsa winner Tommy Franklin will also be in the mix, along with Flatout Gaskets Nitrous Wars Shootout winner “Stevie Fast” Jackson and Rockingham winner Travis “The Carolina Kid” Harvey.

With five of nine races already in the books, the GALOT Motorsports entries of Kevin Rivenbark and John Strickland have all but guaranteed a championship for the North Carolina-based team after the teammates dominated the first half of the GALOT Motorsports Park Pro Boost season. Rivenbark collected the first three event victories of the year, then Strickland swept the last two events in Michigan and Maryland. Tulsa runner-up Melanie Salemi is third in points, followed by consistent contenders Ric Fleck and Paolo Giust.

In the PDRA’s sportsman classes, 2014 world champion leads the points in Ronnie Davis Top Sportsman presented by MagnaFuel and David Brown holds a strong lead in Lucas Oil Top Dragster. Two-time winner Kendal Little tops the Talbert Pro Junior Dragster points, but he’s been absent at the last two races, leaving the door open for Amber Franklin and Cory Gulitti to move into the lead. Mia Schultz has a firm grasp on the MegaCorp Top Junior Dragster lead, holding over 600 points more than her next closest competitor, Arellyn Garner-Jones.

The 3rd annual PDRA Memphis Drags will kick off on Thursday, August 11, with a full day of open testing, which is open to the public. The first of three Friday qualifying sessions is scheduled to begin at 11 a.m., while a fourth and final qualifying session will begin Saturday’s racing action at 11 a.m. Eliminations will begin at 4 p.m. on Saturday following pre-race ceremonies at 3 p.m. Jet cars and a wheelstander will cap off the day’s activities on both Friday and Saturday.